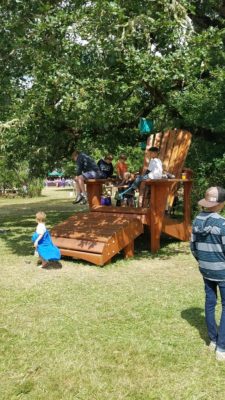 Jul. 7-9: I have been going to the Oregon Country Fair  since 1997, but this is the first year I am writing about it.  Why?  Well, for a couple reasons.  Firstly, I did not start writing for pleasure until a couple years ago when I started my blog.  And besides that, for 19 of the last 20 years, I lived in Eugene, the town where the Fair happens (actually fifteen miles away), so it never felt like I was traveling.

Now that I have moved to Portland and have gone to the Fair, it has become part of my summer travels.  The Oregon Country Fair is a three day festival that takes place in Veneta, a rural town outside of Eugene.

There are lots of summer festivals on the West Coast, but this one is unique enough and special enough that the most commonly asked question in Oregon is, “how do you get a pass to the Fair?”

“The pass” refers to the wristband that allows you to sleep over at the Fairgrounds.  Some say the party only begins when the public leaves around 7 PM.  I say the whole event is a party and the party simply continues once the public leaves.

Now I would not classify myself as a party-er per say, but I am a lover of events where creative and artistic people feel uninhibited enough to open their hearts and minds to see what can happen.  In my humble opinion, that is what makes this fair so special and magical.

The booths and stages, all of which are wooden and quirky in nature, are built into the forest.  No plastic pop up tents to be seen.  All the crafts are handmade; no imports are allowed.  For instance, a fence may have moons and stars at the top, carved out with a jigsaw.  Very few straight edges exist at the Oregon Country Fair.

The food is fantastic for being out in the woods.  Herbal elixirs  on ice soothe our overheated selves who have been dancing for hours on end in the heat.  Fresh donuts at 3 AM anyone?  Four flavors even.  Fruit shakes made in a blender powered by bicycle?  Sure, that’s commonplace here!  Tempura, falafel, Indian, Afghani, Thai, fancy coffee drinks 24 hours a day, and so much more.

For me the Fair would not be complete without a visit to Golden Avatar.  They used to have a permanent restaurant down the street from where I lived and at some point.  I was sad when the owners moved to California.  Now my addiction gets resurrected each year.

The Music and Art

The music and art is unparalleled.  In part because there are so many stages.  There are over a dozen official stages, some of which have a focus like belly dancing or vaudeville.  If you want to see jugglers standing on each other’s shoulders simultaneously taking off their shirts while juggling machetes, then come to the Fair.  If African dance troops are your thing, you’ll find them at the Oregon Country Fair.

Some years I focus on what I want to see and rush around to catch specific acts.  Other years I let the energy of the day carry me along.  That could take me on a parade of Brazilian drummers  following a dragon or could have me sitting underneath a tree in the Love Lounge, where people are singing and practicing sacred geometry.  This year was more about letting the energy of the day guide me.

There are a few musical experiences I make sure to seek out every year.  Chris Chandler is nothing short of a genius in my mind.  He mixes witty prose with some of the best backup musicians around and really gets the audience contemplating.  Jaya Lakshmi performs an electronic kirtan Friday night called Kirtronica.  You can zone out or get into the groove and start moving in a trancelike state.  Either way, her sweet voice and Indian chants touch me deeply.

And perhaps my favorite music is the impromptu music that evolves in front of the fire at Entertainment Camp.  It seems to not even get going until 1 AM and if you have the energy to stay up until dawn, you will be witness to some awesome music.  Entertainers and other Fairgoers take turns playing guitar and singing and it all unfolds in such an organic way.  Nobody is there to direct, but somehow everybody gets a turn.  No egos at play, just a desire to share beautiful music. 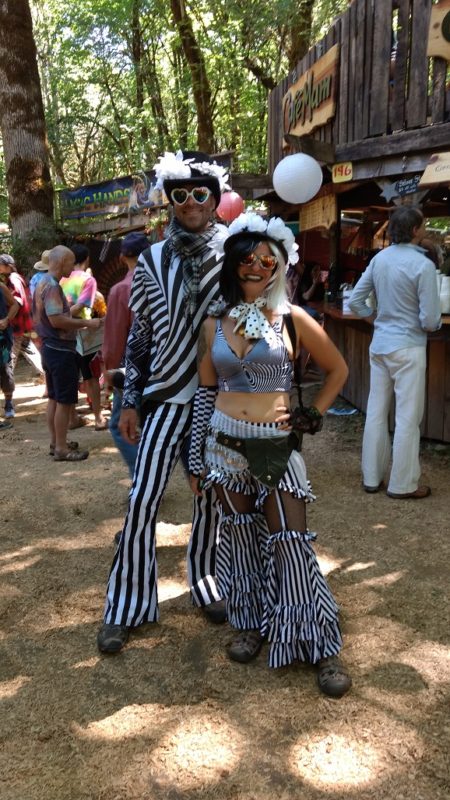 Now you must be wondering about all the dirty, sweaty fair goers.  Have no fear, the Ritz is the place to go to get clean.  It is about 2,000 square feet and contains rows of showers, two large saunas (each one can hold dozens of people), private showers, and even a claw foot bathtub for the extra indulgent. And a mosaic fire pit which is populated by naked people drying off and listening to the live bands.  The musicians just may be nude as well)  I say that if the Ritz ceased to exist, the Fair would cease to exist.

Babies go to the Fair, 80 year olds go to the Fair, and everyone in between does as well.  Some people have been going since they were in utero.  And by the time they are fifteen, they have attended sixteen Fairs.  Unlike Burning Man, which I have not been to, this is family event.  I have been taking my son since he was two.  When he was a teenager, I brought his friends.

The Oregon Country Fair has about 18,000 people with wristbands and about 20,000 people who visit each of the three days.  So if you seek tranquility, I can assure you this is not the place to get it.  It almost becomes a contest of who got the least sleep, how over stimulated you got, and how long it took you to recover.

I have been going long enough and have felt the magic enough times that this event has woven itself into my life.  It is always on the weekend following July 4th. To me it signifies the beginning of summer and what an open spirit can bring to the world.  I find that the vibration from the Fair is often enough to set the tone for the summer that follows.

Whether you have a pass or not, the Fair is a must do for people who are relatively close to Oregon or visiting in the summer.  For a Fair virgin, it can truly be a once in a lifetime experience. 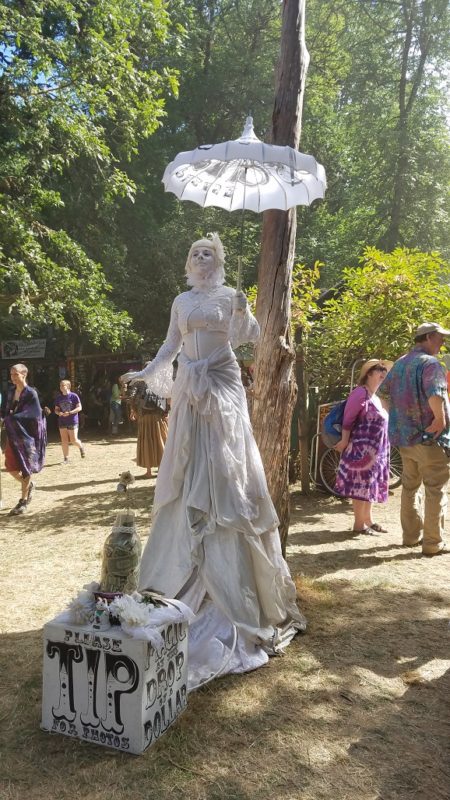