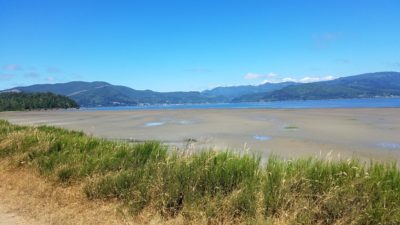 Jul. 19: In the 20 years (to the month) that I have lived in Oregon, I have only visited the north coast  one time.  I know that sounds absurd, especially for someone who has been all over the state, but in short, there was always plenty to do an hour north or an hour south of Florence, which is due west from Eugene where I lived before moving to Portland.

Off to Hiking Tillamook Bay

My friend Susan and I had talked and decided we would enjoy having each other as hiking buddies.  We had a quick conversation to discuss hiking styles.  We both like hikes six to ten miles, moderate to difficult, often an elevation change or varied terrain.  I mostly like getting a move on. But stopping for real scenic moments and a longer break at the pinnacle for lunch works for me.  We felt compatible and so a day was set and off we went.

Purposely waiting until the morning rush hour had passed, we took Route 26 west from Portland toward the coast.  I had highlighted hikes of interest, out of William Sullivan’s Oregon Coast book, in the days prior and we decided on the exact hike in the car.  Our day brought us to an eight plus mile hike that was centered at Tillamook Bay.

The weather was stunning, beyond my wildest expectations.  I have grown accustomed to chilly days on the Oregon Coast.  The coast is not congruent with my idea of a beach, which connotes laying out in a bikini working on my tan.  Actually, the most dependably nice weather on the coast is in September and October.  And so I always bring layers with me.  But for this hike, I ended up leaving my layers in the car and the thermometer almost broke 80 degrees.  And whoever said global warming was a bad thing (just kidding!).

Although the hike was listed as difficult, it really was not, as there was very little elevation change.  But the distance made it worth our while.  We parked the car and off we went on a dirt trail on Bayocean Spit that separates Tillamook Bay from the Pacific Ocean.  The bay is actually an estuary and home to some prolific salmon runs.  To us, it appeared as a sea of blue, glistening in the sunlight, with cars visible way off into the distance.  While there were quite a few cars in the parking lot, there really were few people on the trail.  I am always incredulous of when people don’t actually get out on the trail, yet you won’t ever hear me complain about it.

Walking gave Susan and me a chance to catch up with each other’s lives.  We both are from New York and have been dealing with traveling back there often to help with aging parents.  The similar background and other shared interests means we can understand and relate to each other.  We complement each other well and we both have a bit of the East Coast sass going on. 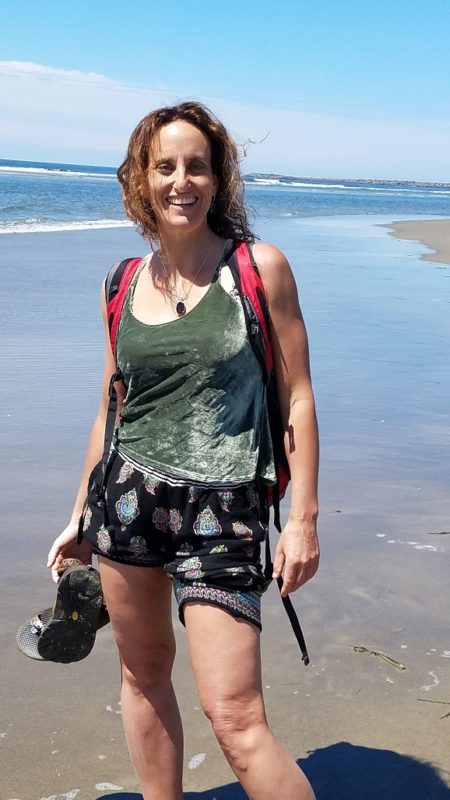 Four miles or so into the hike the path turned left to follow the jetty. Eventually the azure ocean opened up.  It looked inviting enough to jump in, but we both knew better as the Pacific is cold.  Yet wading is fair game and so it was.  Off the shoes came and we splashed our feet in the salt water after the waves broke.  Although not popular on the tourist circuit, this was just as beautiful as places I have seen on the Mediterranean.

The walk back was on the wet sand, which is easier to make headway on than the soft sand.  We hadn’t packed a formal lunch but snacking on perfectly ripe Oregon cherries fit the bill exactly.  The Oregon Coast is very underpopulated compared to the east coast.  I tell you, it is a true delight to spend time there.  Surely I have had fun on Jones Beach or Coney Island, but I have needed to adjust expectations to sharing those places with tens of thousands of people.

The pathway back to the spit was not obvious.  Although between looking at Google Maps and having some sort of sense about how far we had walked, we navigated ourselves toward the spit.  We got some bonified exercise in making our way over the dunes.  Once we located the path, we retraced our steps on Bayocean Spit until we spotted our car in the distance.

To spoil ourselves for a perfect day of hiking Tillamook Bay, we stopped at Pelican Brewing on our way home.  My friend who works there had given me a gift certificate, which was a very much appreciated gesture.  We thought we might just grab a beer before returning to Portland.  Once we got inside, we opted for some snacks as well.

Pelican Brewing has its full scale restaurant 30 miles south in Pacific City, yet the brewing takes place in the Tillamook location.  The taproom opens up to the place where all the yeasty magic occurs.  I have brewed beer at home.  Yet, I never cease to be in awe of the magnitude of large scale brewing.  Carboys big enough to live in!

Some delicious ceviche and a lager for Susan and a craft root beer for me to wash it all down hit the spot.  And was a delectable ending to the day.  Perhaps another time, we will stay later to watch the sunset.  Alas life was calling and we headed back east on the surprisingly bucolic Route 6, eventually finding our way back to each of our urban havens. 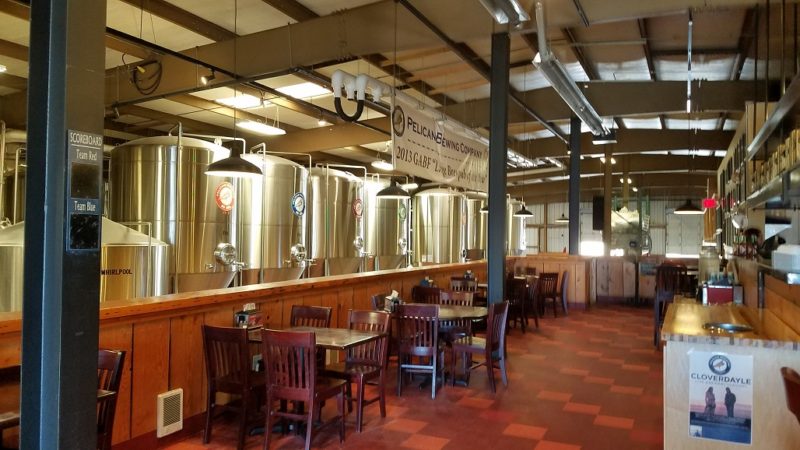