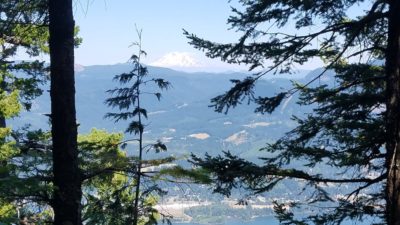 Jul. 25: Two hikes in less than a week.  Now this I could get used to.  June seemed to come and go and I didn’t get out of town for any sort of exploration.  This actually suited me just fine. I have been thoroughly enjoying exploring Portland, allowing my whims to direct me toward new discoveries.  Yet I was pretty sure I didn’t want the rains to commence with my looking back and saying “you know, I didn’t get out of town the entire summer.”  And so, a few weeks ago, I just committed to putting a couple dates on the calendar for day hikes and making sure nothing got in the way.

So Many Choices, So Little Time

Putting Portland at the epicenter, there are opportunities in every direction for day hikes.  Sixty miles west brings you to the Pacific Ocean, with the Coast Range in between providing options for moderate elevation gain.  Due north gets you into SW Washington, an area I have yet to explore.  South is the wine country of the Willamette Valley, as well as the foothills for the Coast Range and for the Cascades.  And east and southeast brings you to the Cascade Range.  Here Mt Hood and Mt Jefferson stand stately and strong, with snow present throughout the year.  Certainly the most dramatic scenery and highest elevations are in the Cascades.  Going due east from Portland following the Columbia River brings you in the unique ecosystem of the Columbia Gorge.

So many choices, so little time, today hiking the Columbia Gorge reigned.  I knew it would be a hot day, but hoped the gorge wind would give me some relief.  The river flows west toward the ocean, but the wind from the ocean pushes east up the channel.  This translates into one of the best spots in the world for wind surfing, which is one of the things the town of Hood River is famous for.

Based on proximity to Portland and the distance of the hike, I selected Herman Creek , which was an eight mile loop with 2600 feet of elevation gain.  Just like last week, I am happy to say I saw only a few souls all day long on the trail.  It is hard to believe that I can be within 40 miles of Portland and have large swaths of land to myself.  But I do believe it.  If you have the ability to get out on a weekday, please do it!

Most of the walk was under Douglas fir trees.  Now the tradeoff here was that the views were not expansive for the most part.  However, on a broiler of a day, I was happy as a clam to have the shade instead of the hot sun beating down on me.

I did get to a point where the forest brought me to a ledge and low and behold, Mt St Helens  was before me.  I took a bit of a spur trail to reach Indian Point which was the pinnacle of this hike.  The river was a blue, winding ribbon as far as the eye could see.  It was just the birds and I, although I let them do all the talking.  Clearly what they had to say was more important than what I had to say.

Indian Point made the perfect lunch spot.  While I could easily have enjoyed the solitude and magnificent vistas, I picked myself up to continue on the loop.  I in no way limit hikes to loops, but all other things being equal, I will select a loop trail rather than retracing my steps.  Why not see different scenery instead of the same thing twice?

The Nick Eaton Ridge Trail brought me on the north side of the mountain.  One of the highlights was seeing a hillside covered in St John’s Wort.  The plants had already flowered, so harvesting flowering tops for medicine was not an option. But next June will roll around before I know it.  And I will keep this mountainside in mind for wild crafting.

There were sections of the trail that were steep and a few times I almost slipped.  I was shaking my head at the fact that I took my hiking poles out but left them at home.  This was not the first time that happened, and I could only think “Not much good they were doing there!”  Yet slow and steady I went and an hour or so later, I was on easy terrain.  I always know a hike is coming to an end when it starts getting easy again.

I saw very few people throughout the day.  Although when a woman and her son asked if I knew how to get to the waterfalls, I stopped and spoke with them.  I knew that the trail I took would not get them there, but we looked at my copy of William Sullivan’s guidebook and found another trail that would lead them to the water.  I have asked for directions often enough that I feel awesome when I can pay it forward to other lost and confused souls.

Soon enough I was back at my car.  And I will tell you, the next day, my calves were sore as sore can be.  I do a lot of resistance exercise, but purposely do not work on my calves, since I do not want to grow them bigger.  Since training is so specific, or, in this case lack of training, I was totally feeling it.  I actually needed to hold on to the railings on the stairwell for extra support for the next few days.  My lower legs seriously felt like they were made of jello.

The Columbia Gorge is a crown jewel of Oregon and especially Portland.  And now I also know it can whoop my butt, or at least my calves.  And how lucky Portlanders are to have such a place right in our backyard! 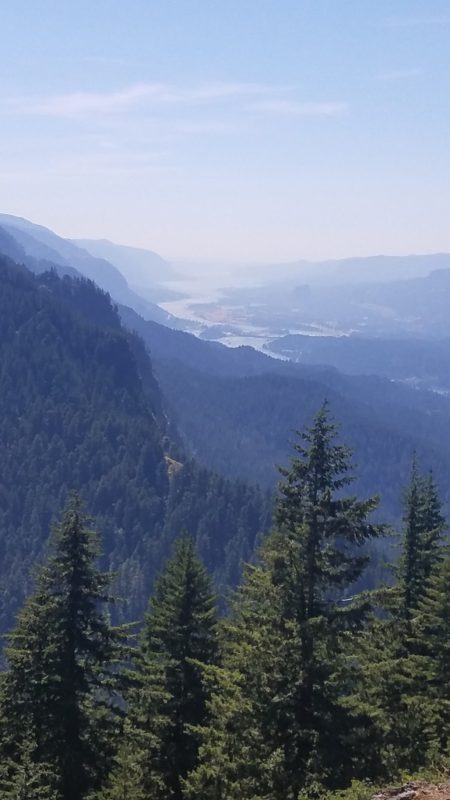