Camping in Mt Hood for the Weekend 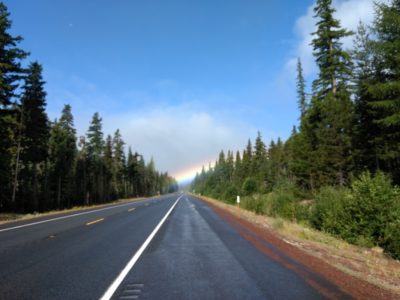 Aug 11-13: Standing proud and determined as seen from downtown Portland, is Mt Hood, 11,250 feet tall and Oregon’s tallest mountain.  It is part of the volcanic Cascade Range.  And the Cascades are part of what attracts many outdoorsy folks to live in Oregon.

It is not exactly a quiet place on summer weekends due to its proximity to Portland.  But hey, I am glad there are a lot of us getting outside and enjoying the sights.  I knew this would be a great complement to the hike I did in the nearby gorge a few weeks ago.

In addition to being a traveler and foodie, I am also an herbalist.  I had a teacher who was prominent in my life for fifteen years, but she passed away four years ago.  I was affected deeply by her loss and continued to study on my own, fostering my relationship and knowledge of the plants.

Camping in Mt Hood with my Herb Class

When I moved to Portland this winter, I decided to study with a new teacher, Chris Smaka, as I had missed the community element of taking herbalism classes.  So the short story is that our herb class, which meets one three day weekend a month, had a class trip to the woods.  There is something to be said for learning through direct experience.  And spending time camping in Mt Hood is exactly that.

Not everyone attended.  Yet with a dozen of us, we came up with a plan to stake out a couple campsites next to each other and double or triple up on cars.  And so it was Nottingham Campground on Route 35 that was our home for a few days.

I quickly put up my tent under the shade of some fir trees.  Soon enough, we all gathered by the East Fork of the Hood River.  The river was silty and flowed rapidly bestowing us with a rhythmic gurgling sound.  Not great for drinking (too much sediment to clear out), but perfect for drifting off to sleep.  The lack of city noise was very welcome.  No motorcycles zooming by or garbage trucks making a ruckus – just the sounds and aromas of the woods.

We woke up early and carpooled in a couple cars to Mt Hood Meadows, where we would spend the first part of the day walking, at the pace of the plants.  I set my intention in a circle the evening before, and said my goal was to learn three new plants.  That may seem not very ambitious, but it speaks to the fact that I already know a lot of the plants.  And also, I recognize that if you learn too much at one time, it can be hard to retain the info.

We did some shuttling to put a car at the end of the trail and then all started at the beginning.  A real treat of the day was the abundance of ripe huckleberries.  I kept lagging behind the group.  I just could not resist picking those ultra nutritious berries, which pack a flavorful punch.  Wild foods have a lot more nutrition per gram than their cultivated relatives.  And a little bit goes a long way in creating vitality.

The sub-alpine fir tree, different from our common Douglas firs called to me.  Their bark is full of blisters and when I popped a blister, resin oozed out.  Resin is often acrid, but this was much gentler, as I immediately knew from its taste.  A faint flavor like pine revealed its medicine to me.  I knew that this tree would be an ally for healing cuts and combating infection. It is probably a challenge to collect a generous portion of it, but very accessible for when I am hiking and need it. 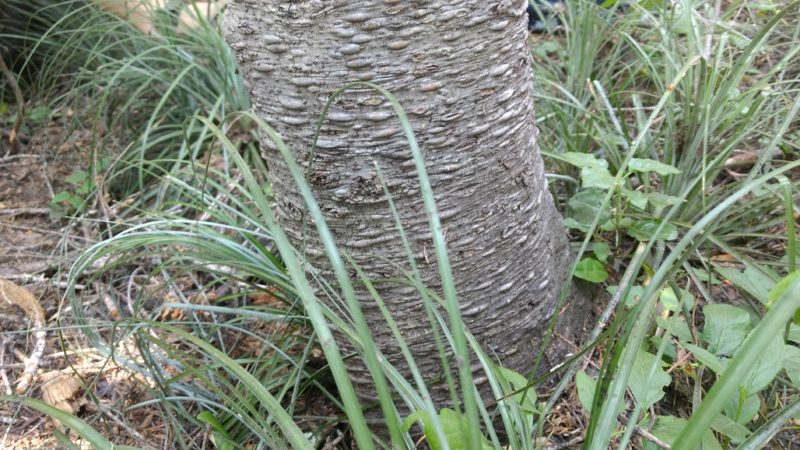 Those Bumps on the Fir Tree are Filled with Medicine

Other hikers and people walking their dogs passed by, but we took little notice of them.  We were mesmerized with the plants.  It is not a surprise to me, but it never ceases to amaze me how much medicine is within my reach when I get out in the woods.  And furthermore, how diverse the medicine is.  Even standing in one spot and harvesting what is within reach, could yield years of medicine.  Medicine for conditions ranging from diabetes, to circulatory health, to healing sprained ankles, to eye washes, to a relaxant, on and on.  The earth is abundantly generous!

Our walk culminated with a play date with a waterfall!  This brought out our inner children and we all ended up splashing around and climbing on the logs.  The mist was responsible for making rainbows galore.  I don’t know about you, but I cannot do anything but smile when I see rainbows.  I am not sure if there really is a pot of gold at the end of it, but it matters not, since to me, the gift is the rainbow.

The Wildfires Infringe on Us

We returned to camp and regrouped.  Those of us who wanted to, set off on another smaller outing, one that would provide a view of Mt Hood.  Chris took us up a Forest Service Road and then on a spur trail where the terrain was not great for driving.  At a point with no marker, we all got out of the car and walked through some brush to reach a vista.

There was smoke in the air due to drift from wildfires and things were hazy.  This was the case in Portland earlier in the week as well.  It was a bit surreal, because it was a hot day and felt like it should be clear and sunny.  Yet there was a haze hanging over the land, like a helmet that we could not take off.  The outline of Mt Hood revealed itself, with very little contrast to the sky surrounding it.  Even so, we all took turns getting our pictures taken.  How could we not? 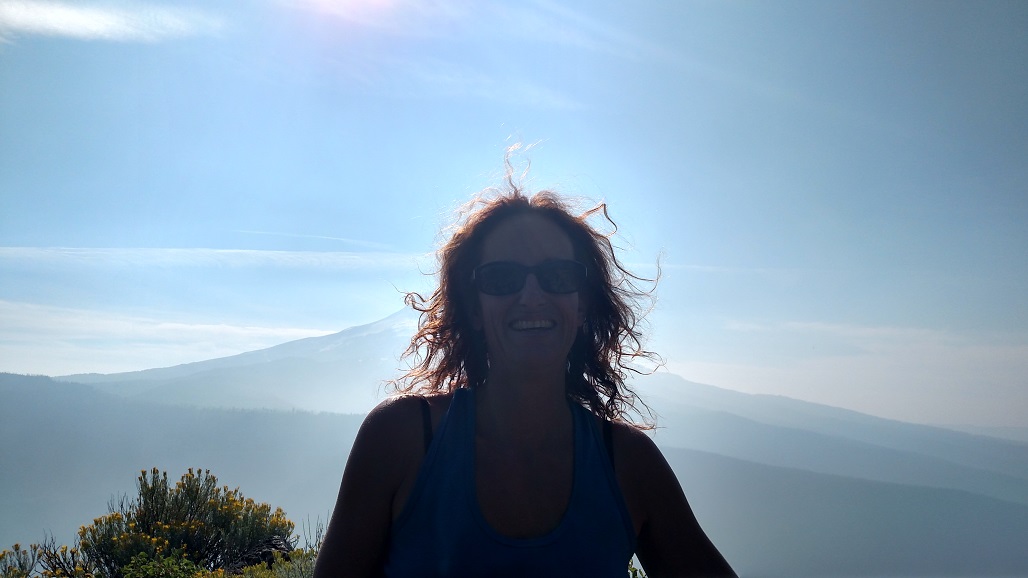 The Perseid Meteor Showers are Obscured

A quiet evening at camp ensued, and we lit a couple campfires and each made our own dinners.  My food scene was simple.  The technique was called – empty out the fridge and put it in a cooler and snack on it throughout the weekend.

Fortunately for me, my fare was spiced up.  My classmate Jessica had some incredible food she preserved and was generous enough to share with me.  She lives on the coast of the Olympic Peninsula and foods from the ocean are abundant in her life.  Home canned salmon that was super rich and fatty and oh so wonderful.

But what I really fell in love with was this relish she made from bull kelp.  It was a mineral rich condiment and I could feel my body just sopping up the nutrients.  I kept taking another scoop and saying “I hope it’s OK I keep eating this?”  She assured me she had lots of home.  The she revealed the key to making it.  Firstly she finely chops kelp she finds on the beach.  Then lets it stew all day in the pressure cooker, with onions, garlic and spices.  Pretty inventive, and when I get to the beach, I will be on the lookout for washed up bull kelp.

I should mention camping in Mt Hood this weekend happened to coincide with the Perseid Meteor Showers, which peak every August 9-13.  Although I believe they are happening all the time, but they can best be seen from earth each year on those days.

I did stay up until it was dark, to see how the sky revealed itself to us in Western Oregon.  Although I’m sad to say that due to the smoky skies, the meteor showers were completely obscured.  I set my alarm for 3 AM, hoping things would have shifted, but alas, they did not.  Well, I intend on living for many more years.  And it is always on my radar to get into the woods this time in August.  Win some, lose some.

The stream was every bit melodic as it was the night before and I slept as peaceful as ever.  Sometimes I am carrying on with life, not even aware of how much I go, go, go.  Until I allow myself to decompress and then my body lets out a big aaahhhhh.  I don’t have to leave the city to do this, but it certainly is a compatible and encouraging atmosphere to foster restoration.

Well, there is always some part of me that could just stay in the woods and let the rest of life drift away.  Another part of me that loves to nest at home beckoned.  In the morning I packed up my stuff and said goodbye to my herbal friends and returned to Portland.  But with Mt Hood National Forest so close to home, I know it will only be a matter of time before I am back. 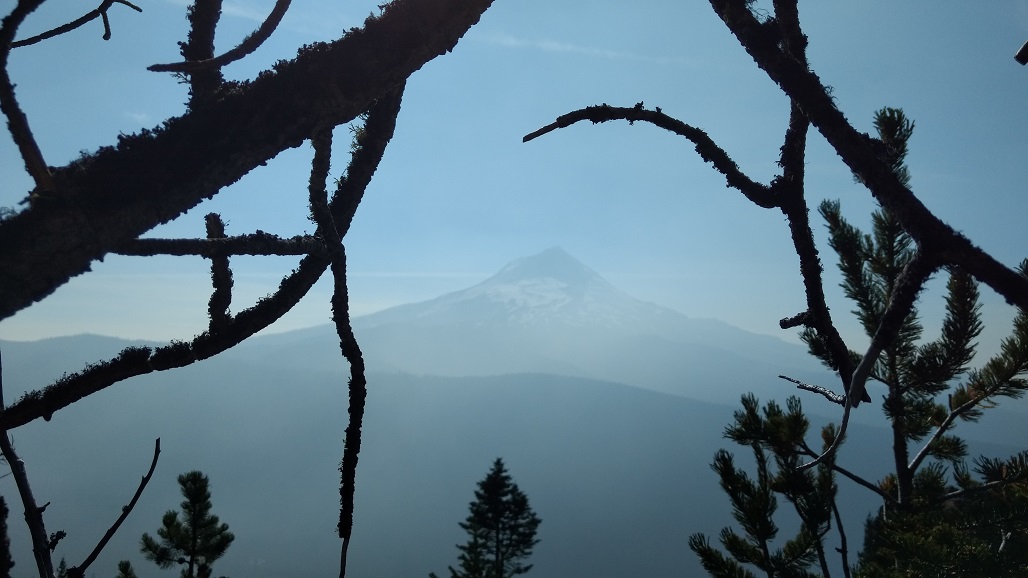