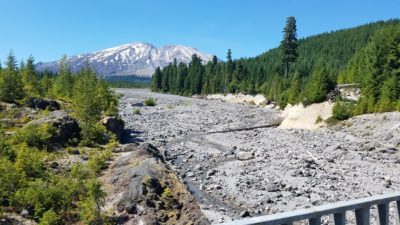 Aug. 25: The windows from my apartment face north and, on clear days, I am graced with seeing Mt St Helens, 70 miles away.  From that distance, the mountain is not that big.  Being that it has snow on it much of the year, it makes itself visible, glistening white and in the alpen glow, almost a shade of blue.  It is the next tall mountain north of Mt Hood, in the Cascades.  Seems like I am hitting them all this summer.

I drove up it once probably close to fifteen years ago on my way to Seattle. I recall seeing a mountain side of fallen snags, a result of the 1980 eruption, when she literally blew her top.  And I have seen her many times through the years from an airplane, when I fly home from the east coast.  Often, there is a thick cloud cover.  But standing at 8366 feet, perhaps the top 1000 feet or so emerge above the clouds.

What makes Mt St Helens stand out is that she really does look like she blew her top.  Either that, or that someone came by with a giant blade and cut her top off.  It’s pretty cool that her active geological activity was so recent and lots of Portlanders recall May 18th, 1980.  It was the day she erupted and showered the city with ash.

Anyway, I had a hankering to get to know her a bit more personally.  It’s very difficult to see her finer details from my apartment window.

Off to Mt St Helens

I asked my friend Michael if he was up for hiking around Mt St Helens, while he probably would have picked somewhere closer to home, he was amenable.  We were on the road by 8 AM and beat the morning traffic.  I picked out a hike called Ape Canyon.  It appealed to be because it was a good jaunt of nine miles and it lead to a crevasse on the border of the recent volcanic activity.

It didn’t take long to get there, since the hike was on the southwestern flanks of the mountain.  I took William Sullivan’s book and off we went.  I noticed signs for a waterfall and commented we could do that if we had extra energy at the end of the day.

We walked a while and I was having a hard time relating our walk to the map, but so be it.  However, after 30 minutes or so, we somehow found ourselves back at the parking lot.  We must have taken a wrong turn somewhere!  So back we went, and we followed some other people who had the same end location in mind that we did.

I still found the whole thing confusing, because the river should have been on our left and it was on our right.  But we crossed over a bridge and took a different turn and continued on.  The Muddy River (which didn’t look at that muddy) rushed past us through a deep canyon with tremendous sized black rocks, all the result of old lava flows.  Large drops in elevations set the stage for cascading falls, each one more captivating than the one preceding it.

At one point, we needed to climb down a very steep ladder that was cemented into the rocks at both ends.  Steep as in almost a 90 degree angle and going straight down.  As long as we didn’t look down, all was well!

See the Ladder in the Background?

We picked up the trail and carried on.  Unfortunately when we arrived at a crossing, there was a sign stating that the trail was closed, due to fallen trees.  When one embarks in more remote places, the likelihood is higher that the forest service has not maintained the trails.  Or at least not at any given point.

Since the trail we were on was closed, we got off on a spur trail.  It paralleled the river which had flattened out by this point.  It is always fun to explore, but once we realized that we would not get down to the river because the bank was too steep, we headed back to a spot we saw earlier where river access was possible.

Taking Advantage of Our Mis-steps

Traveling helps us practice the art of improvisation, and so be it – we carved out a perfect lunch spot.  Our trip back included diversions too, mostly because we took a wrong turn here and there.  In an urban area, I have a keen sense of direction.  In the woods, I can hardly tell left from right.  I have great respect for people who are attuned to what stump or rock we walked past on the way in and are able to draw upon this to find their way back.  I am not in that club.

We did eventually come across another hiker who directed us back to the super steep and tall ladder.  Then we knew we would be golden.  At some point, I embarrassingly came to the conclusion that we parked our car in the lot for Lava Canyon and to hike Ape Canyon, we should have parked a couple hundred yard before that.  Oops!  Either way, we did in fact end up hiking around Mt St Helens.  Michael joked about needing to get a different tour guide in the future.

It probably turned out to be a good thing that we trekked around Lava Canyon for five or six miles.  I have a lingering hamstring injury and nine miles may have been too much.

But you know what the real treat was?  Actually, there were two real treats.  On the road home, we passed by Mt St Helens at such an angle that she revealed herself in her finest form.  Stopping and admiring the view and snapping a few pictures was not even negotiable!

I am not sure if I will get to Ape Canyon next year.  Perhaps, but what I really have my sights set on, is making a trek to the summit.  Permits are required, and they are limited to 100 a day.  They sell like hotcakes, especially for summer weekends, but honestly, for weekdays too.  But it’s on my calendar for next February to snatch a couple up, so we can stand at the edge.  The edge between new and old, the edge between what is familiar and what is groundbreaking.  I have that and so much more to look forward to. 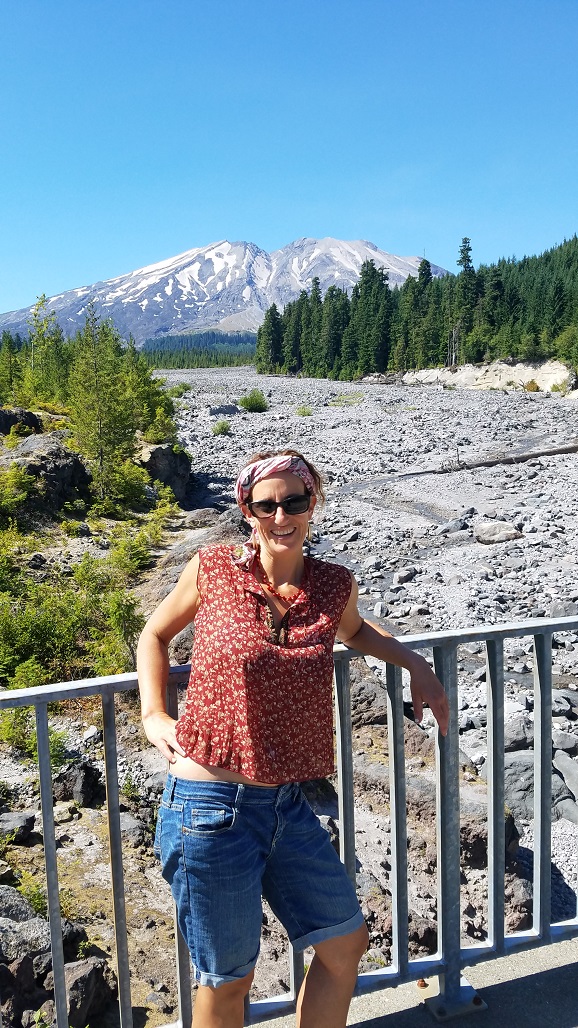