Aug. 21: It seems like every few months, there is some astrological thing that is happening, that is some sort of once in a lifetime event.  Of if I live to see it twice, I was in diapers once and demented the other time.

They don’t all interest me, and living in Oregon – well let’s just say I accept that I won’t get to witness a lot of astrological happenings, because the sky is often overcast.  Yet logic ruled that there was a good chance I would see the Great American Eclipse, which took place August 21st.

The Day of the Great American Eclipse Has Come

What was very cool is that it crossed the entire 48 states, west to east coast, and fourteen states experienced a total eclipse.  A 70 mile band was blessed with totality and much of the country saw a partial eclipse, although you needed a special type of glasses to view the partial eclipse safely.

In Oregon, the band was in between Eugene and Portland.  The nearest sizable town to me where totality would occur was Salem so that’s where I ended up.  I toyed with different ideas in my head of how I would partake.  I thought I might just pull over on the side of the highway and beat the traffic home heading north.  Then I thought of a nice rural place, but I didn’t want to do too much out of the way driving and not be assured of having peace and quiet.  And lastly, I tossed around the idea of going to a smaller town, like Dallas (yes, there is a miss it if you blink Dallas in Oregon) or Aurora – and then making a day of exploring rural the Willamette Valley.

After talking to my friend Tom, who lives in Salem, I decided to give the state capitol a whirl.  He told me a few fun things to do there and some good downtown viewing spots.

Heading to the Path of Totality

I set my alarm for 2:30 AM and was on the road by 3 AM.  Who knew what the traffic would be like? I didn’t quite believe the highway would be gridlocked later in the morning, but I expected it to be like a mega rush hour and why put myself through that.  I was not the only one who thought 3 AM was a good time to hit the road.  It made me smile seeing that there was virtually no traffic headed northbound and the highway was full (but moving fast) southbound.  Rafting last week, there were less crowds than usual, as everyone stayed inside, scared of the idea of everyone being on the road.

Fast forward some hours and after parking in Salem I rode my bike three miles to downtown.  I was surprised at how close I could have parked, but it was nice to get a bit of exercise.  Most people were on foot.  It was a scene straight out of July 4th – families, couples, and children, babies in strollers, all coming out of the woodwork and converging to the spot where the action is.

The Capitol Building Comes to Life

The lawn of the Capitol Building was obviously the downtown spot to be.  People were sprawled out with blankets, waiting for the celestial show to commence.  I took a stroll around downtown, mostly to see if there was a spot that spoke to me strongly, as well as drum up something cold to drink.  Lots of places had signs on them explaining that they would open at 12 PM, since they were letting their employees enjoy the eclipse.  The coffee shops that were open had lines too long to interest me.  I did however like the women set up with a cooler and a hand written sign, selling cold brew coffee.  Reminded me of my days going to Dead Shows.

Riverfront City Park was another gathering place, but in the end, I decided to go to go back to the Capitol Building because it was the sunniest location.  Keep in mind on the west coast, the moon started to obscure the sun at 9:15 AM.  There was still a chill in the air.  It would reach totality by 10:17 AM.  The sun did not appear obscured to the naked eye, it continued to burn bright for most of that hour.

What was truly fun about my Eclipse Day was the energy running high with the gathering of kindred spirits.  Events like this have the power to bring so many types of people together, it makes for fascinating people watching!

About ten minutes before totality, the light began to shift.  I had expected it would be like sunset, but it was not.  Instead, there was a blue cast to the air.  Almost like somebody pulled some tinted blinds down.  The chatter and excitement mounted, I don’t think any of us knew exactly what to expect.

Just a few minutes before totality, the air temperature dropped and the sun was no longer bright.  The moon had taken such a large bite out of the sun, that the effect was observable on different levels for us here on earth.

In an instance, it was night time.  There were stars in the sky!  A surreal quiet permeated the air, the birds stopped chirping and animal activity ceased.  Click here to see what it was like watching the Great American Eclipse from Salem. 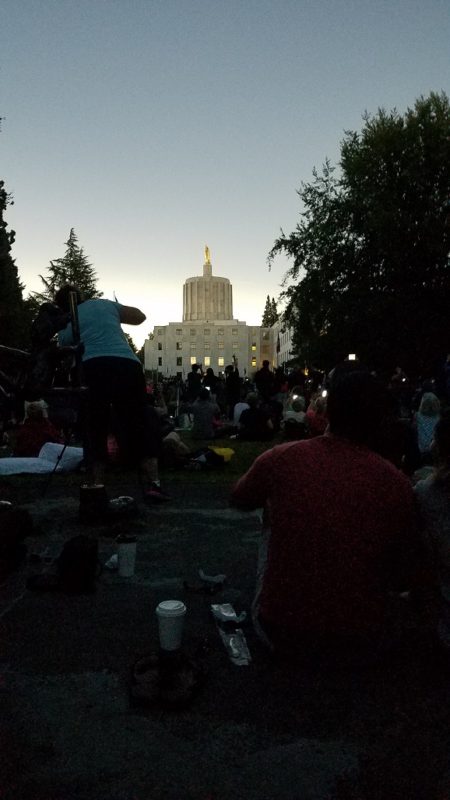 Yet we humans were livened.  And it was now safe to take off our sunglasses and stare directly at the sun.  The moon was obscuring the sun, yet the light from the sun shone a ring around the moon.  Imagine a dark circle with a halo.  The clapping and cheering began amidst the oohhs and aahhs.  It was infectious.  I personally transcended into this blissful state, almost feeling like time had stood still.

Two minutes quickly ticked away and the moon/sun moved into the grand exit phase.  On the top right side of the moon, the light emerged.  And within 30 seconds, the earth returned to full daylight.  The experience was over, but oh, it was SO worth driving to totality.

I have done lots of cool things – snorkeled with sea lions, watched the sunrise with howler monkeys from Mayan ruins, ….  And now witnessing a total solar eclipse ranks up there with those in terms of “totally awesome.”

I biked quickly back to my car and hit the road.  I expected the traffic to be worse than coming, since we arrived in staggered times and all headed back at the same time.  However, I also did not expect the traffic to be as bad as the media predicted, since people would be watching the eclipse from different places, and those who traveled from other states to Oregon would stay at their hotels until Tuesday.

Let’s Make It a Peachy Day

Anyway, it took me three hours to get home, about three times what it would normally take.  And that includes a stop at Pilgrim Orchard, a peach farm.  I took the rural route 99E and, when sitting in traffic next to a peach farm, I said to myself, “screw this, let’s get some peaches out of this experience.”

So an hour and 22 pounds of peaches later, I got back in my car and trudged along the backroads.  Once I got to Wilsonville on I-5 twenty miles south of Portland, it was smooth sailing.

People I spoke to that day all were on cloud 9.  The Great American Eclipse had people pulsing with energy.  Formerly, I had not pictured that I would be someone who would travel long distances to witness such an event.  But I have to tell you that these two minutes have seared a memory into my being.  So much so, that I now would strongly consider being an eclipse chaser.