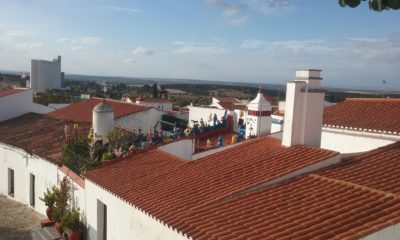 This Rooftop Decorated with Plastic Figures Sets It Apart

As we noted yesterday, the woman at the pousada told us that most of the town’s sights are closed early Sunday and all of Monday.  We figured we may as well get out into the countryside, since we know that it never closes.  Plus we liked the idea of being out and stretching our legs in the wild.  We did some research online and found that the wild area of Guadiana Valley Natural Park or Parque Natural do Vale do Guadiana was relatively close by.

Last night we reviewed a dozen or so specific hikes to find one that would be a distance that worked for us, as well as take us through varied terrains.  This morning we printed off the map and were off.  We were ready to embark on a moderate hike that would take us by some waterfalls and rapids.

The drive was of course bucolic and the rural countryside with the cork oak and olive groves continued to enchant us.  Although they weren’t occupied, Dan pointed out many fascinating stork nests, mostly on power poles.  The nests are quite the construction effort and certainly impressed the two of us. 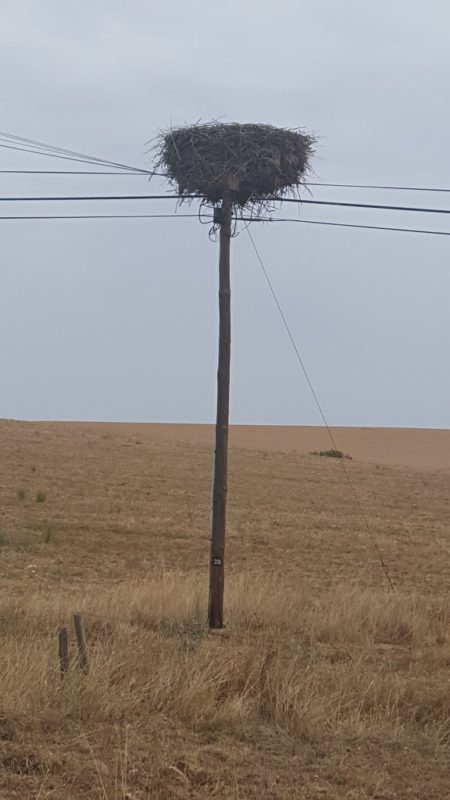 At some point we lost our GPS tracking so we continued with good old fashioned written instructions, turn by turn.  Unfortunately when we got to the end – literally the end of the road – it was clear we were not where we thought we should be.  But it seemed silly to spend any more time driving around looking for a particular spot, when it was evident that we were in a wild and beautiful place.  And we were certainly somewhere in Guadiana Valley Natural Park.

We Followed the Directions and Arrived at This “Village”

There was a steep trail down the river, but we couldn’t cross as it was deep and fast.  And there was no trail along the river either.  However, the strong and beautiful river and the rocky terrain were calling us.  So we set out.  The rocks were jagged and rough and involved a lot of careful footing to make any headway.  The flora was comprised of mostly large shrubs, as the region doesn’t get enough water to create forest.

We didn’t get that far in distance, but made up for it in bushwhacking.  Our exploration required that we climb a steep slope and as we did, we were forced to scale rocks and grab thorny plants to stabilize ourselves.  The prize was that we made it to an awesome overlook, a couple hundred feet above the river.  After so much sweating to get up there, surely we were deserving of hanging out for a while to drink in the views. 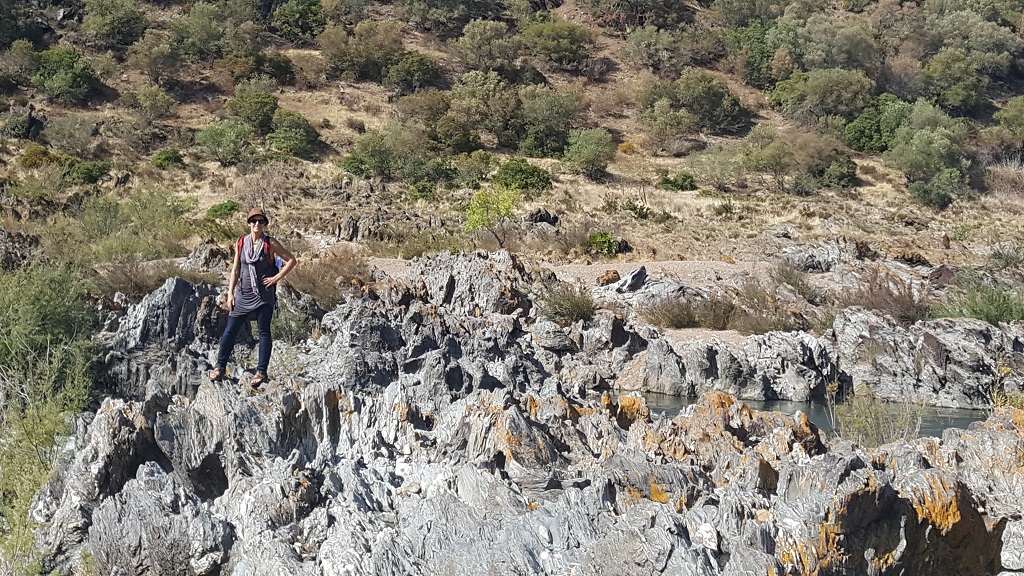 We Weren’t Going to Get Far in This Terrain, but We Loved the Scenery 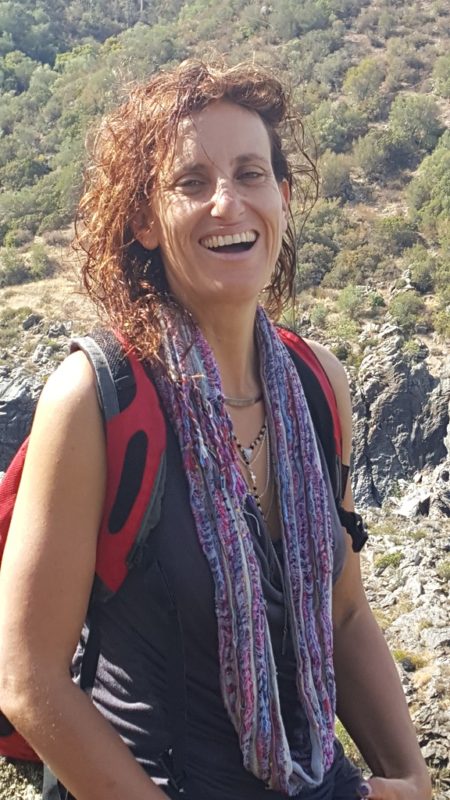 We Were Exuberant Enjoying Our Overlook 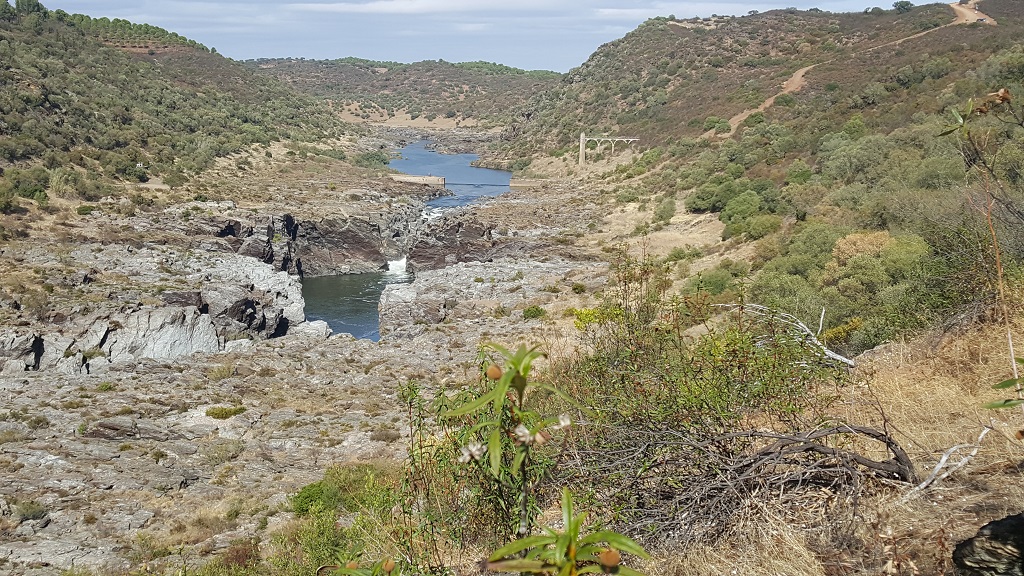 After the tranquility of our perch, it was another bushwhacking experience to get back to the car.  By that time, we both had our fair shares of scraped arms and legs, not to mention we had run out of water long ago and the day was getting progressively hotter.  For the most part, we were in go mode as we headed back to civilization, but we couldn’t help but pull off to examine the cork oaks close up. 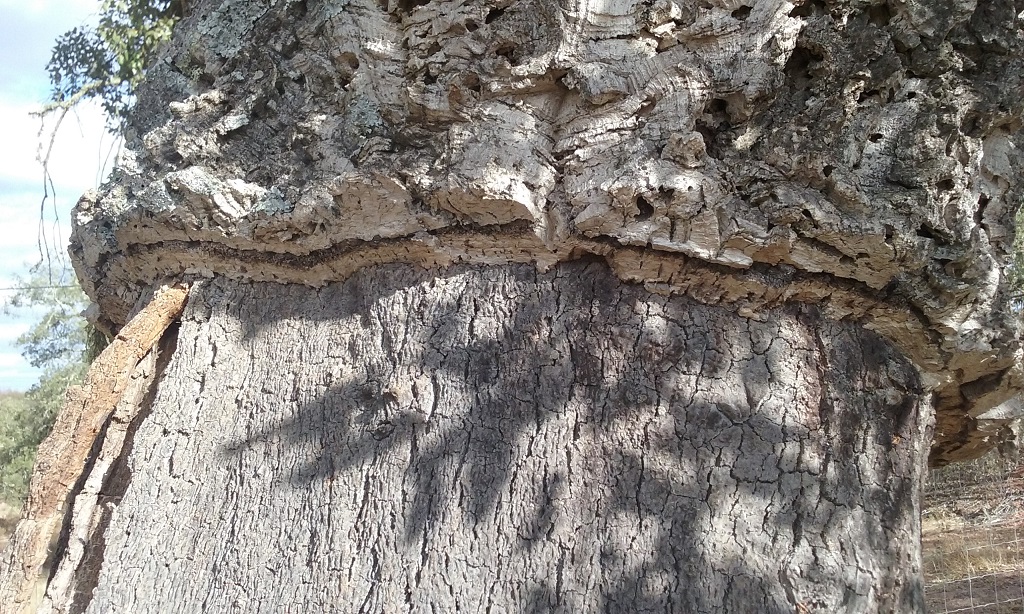 This Closeup Reveals What Part of the Tree Is Cork

Going to this park gave us a chance to visit the rural village of Serpa on the way back.  We had read about it before the trip, as they are well known in Portugal for their sheep cheese.  We were also starving, so we headed to the main square to find some lunch.  Most of the places were closed Monday, and the place we thought looked good was in between lunch and dinner.  Ready to eat the tables and chairs, we got some cheese and olives from a deli type place.  And water, and a couple extra waters, while we were at it!  The square was very unpopulated and this being the second day and place we have seen this, it’s evident that the Beja region is relatively untouristed. 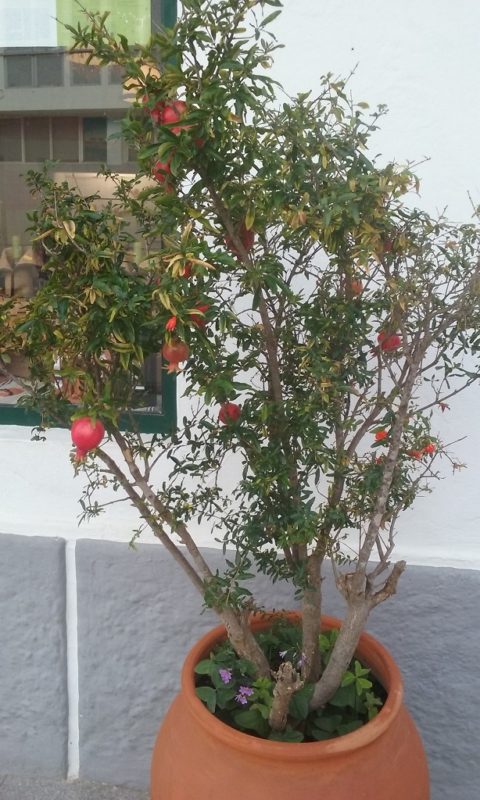 Back in Beja, we scrubbed ourselves clean and decompressed before going to dinner downstairs in the pousada.  Earlier, we inquired at the front desk and they told us that reservations were essential.  We showed up and there was one other couple sitting there and no staff.  After waiting about ten minutes, I went to talk to the man at the front desk and he called around to find a staff member.  Someone emerged and sat us and then they disappeared again!  Another ten to fifteen minutes passed and Dan walked into the catacombs of the kitchen.  All he could find was one dishwasher watching TV.  So he proceeded to the front desk and five or so minutes later, the server finally came.  The food was passable but the service was peculiar.  The manager must be one strange cat.  We did however get a good laugh out of the situation.

We took our evening walk and explored the nooks and crannies of the thirteenth century pousada, acknowledging that we had indeed pulled off another incredible adventure. 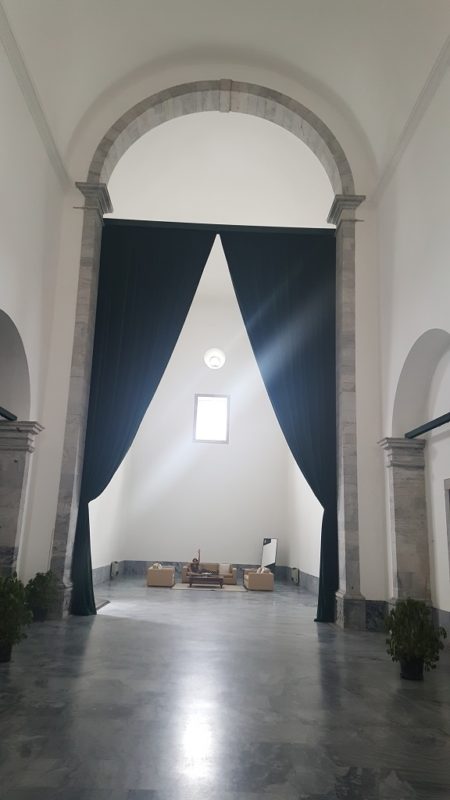