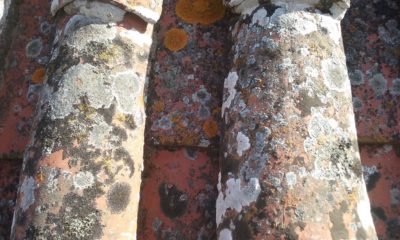 Oct. 16:  We both found Évora to be totally charming and neither of us were in a rush to leave, even though we knew Beja was our final destination for the day.  The carriage ride yesterday revealed a few places we wanted to see today and so it was. . . .

Our first stop was a museum that was entirely about local crafts.  Some of the local resources that were used were cork, sedges, and grasses for weaving, and local woods like olive wood.  The room was arranged by medium and also chronologically.  At some point, metal was introduced into the craft domain.  And then even factory made homewares entered the equation.  Obviously we had a hard time understanding what typewriters and vacuums had to do with regional artisan work, but overall it was an interesting visit. 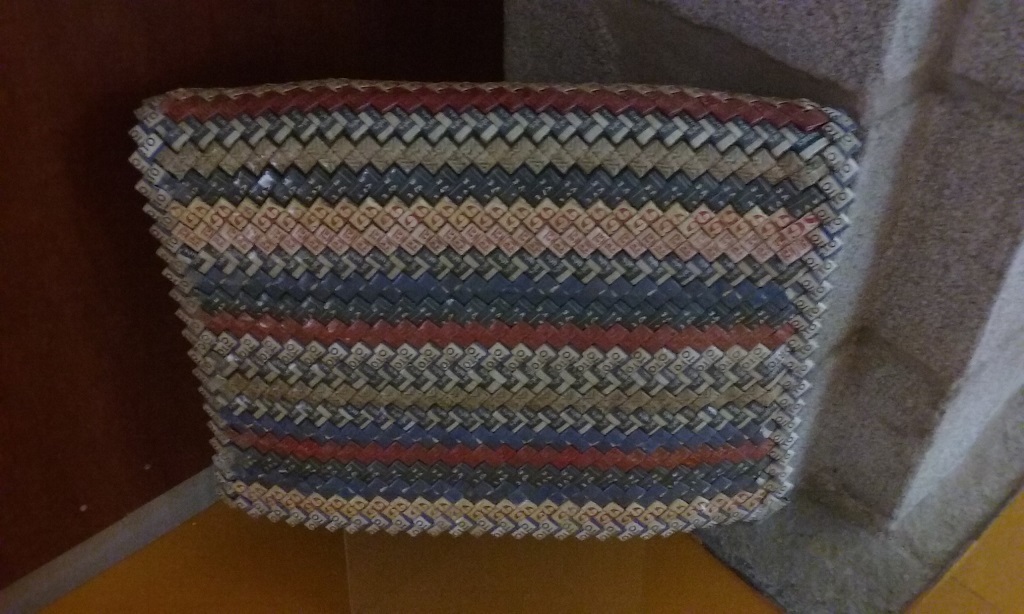 A Mat Made out of Cigarette Packages, Pretty Creative

Next, we went to the sign that advertised a Mercado.  Since it was Sunday morning, only a fraction of the booths were there, but we got a feel for the place.  And the people who were there presenting and shopping were in good spirits.  The fish market was in the next store building.  Maybe it was separated because of the smell?

The shop below the Mercado was focused on wine as well as other gourmet regional products.  I asked the woman behind the counter if she sold a type of wine that was like port, but local.  I told her I had tried some yesterday in a restaurant and wanted to bring some back to the States.  She asked what restaurant and when I said “Dias is the chef” she walked us over to a shelf and said “I know Dias, this is what he serves at his restaurant.”  I know it’s a small town and all, but Dan and I still had to smile.

Botanical gardens always catch my eye when I travel.  Some are modest, some are elaborate – but they all are expressions of people’s appreciation for plants and tranquil spots in nature.  Évora’s gardens were small.  They had a nice gazebo and what really caught our eyes most were the flock of peacocks.  About half a dozen females and one male all gathered around a decaying Gothic-Manueline building.  Although it was not a marked sight on the tourist trail, it was very intriguing to us.  We seem to find such sights around practically every corner. 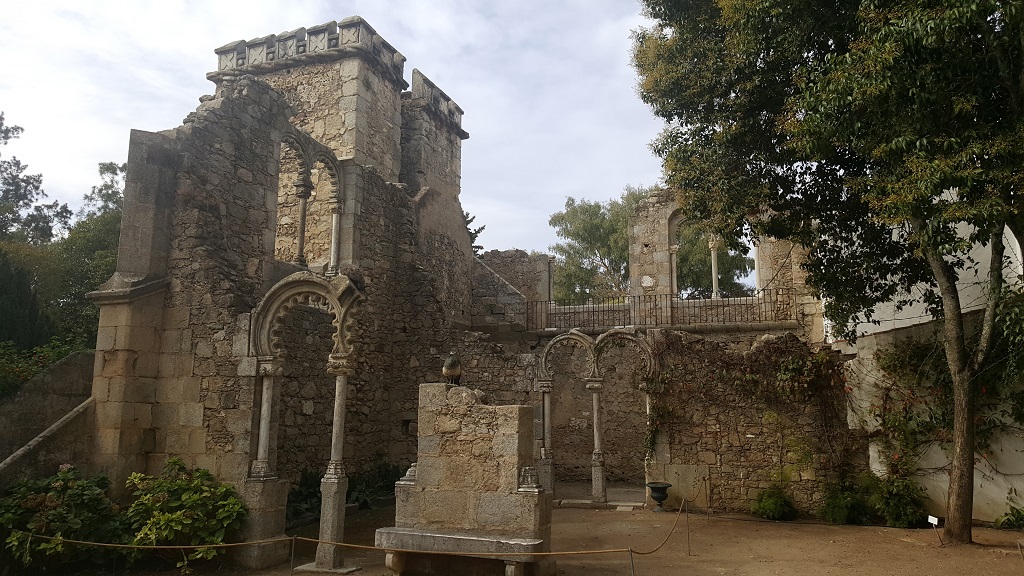 A Gothic-Manueline Building Returns to the Earth

Soon enough, we were off to Beja, which is known as Évora’s plainer cousin.  First thing we noticed was how quiet it was.  We checked in to the Pousada de Beja, which was gorgeous.  It used to be an all-male Franciscan convent or monastery.  It was built in in the 13th century.  There are records of a land transfer for the convent from 1268.  And an important chapel for Saint Louis was built in 1304.  Interestingly the legend is that the chapel was built in his honor for his help in a bear attack during a bear hunt near the Guadiana River.

The convent was remodeled extensively in the 17th and 18th centuries and continued as a Franciscan monastery until 1834.  Although the remodeling was extensive, the “bones” of the old place were still very much present.  The sanctuary of the old church was just off of the lobby.  It had 45 foot tall ceilings and you could really hear the sound carry.  There was a display around the room featuring traditional costumes including toreador garb, although we never figured out the specific connection to Beja.

In what used to be the apse, which is generally the most ornate and decorated part of a church, were bare walls, high ceilings, and a couch.  The couch looked like an ant, since it didn’t fill the space, even a tiny bit.  There was also a beautiful pool in the courtyard.  It was not officially open, but we were told that if you thought you could handle the cold water, then by all means, go for it.  So I did.  It was rather chilly and I think I got my 30 minutes of cardio in for the day, in less than five minutes in the pool.

The woman who checked us in informed us that a lot of the museums are closed on Monday and only open until 5pm today.  There were a few things that she told us would be the worthwhile sights with only half a day to see them.  A lot of the other things could be looked at from the outside.

The first stop was the Archeological Museum.  Now this was an incredible museum, as small as it was.  In 1983 a man who owned the land privately was starting to develop the lot to build a house.  He discovered what looked like archeological remains and brought them to the attention of the city.  The city was willing to trade another parcel to get this one for preservation.  As it turns out, this spot had not only Roman structures, but a wall that goes back to the Iron Age, 3000 BC.  The floor of the museum was roughly 2000 square feet and it was all glass with some metal beams for support.  We put slippers on to walk around.  It was pretty amazing to see the complexity of the Roman baths, wells, and silos. 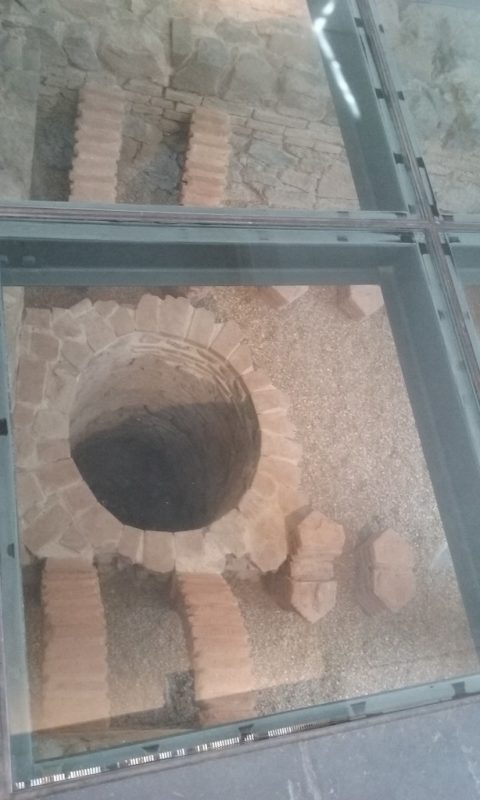 On the left side there was a display of artifacts from 10,000 years ago until contemporary times, all of which had been found on the site we were standing over.  They were displayed chronologically.  So while the only structures were of Iron Age and Roman times, the artifacts spanned from Neolithic times all the way to modern coins and ceramics that had been dropped on site. 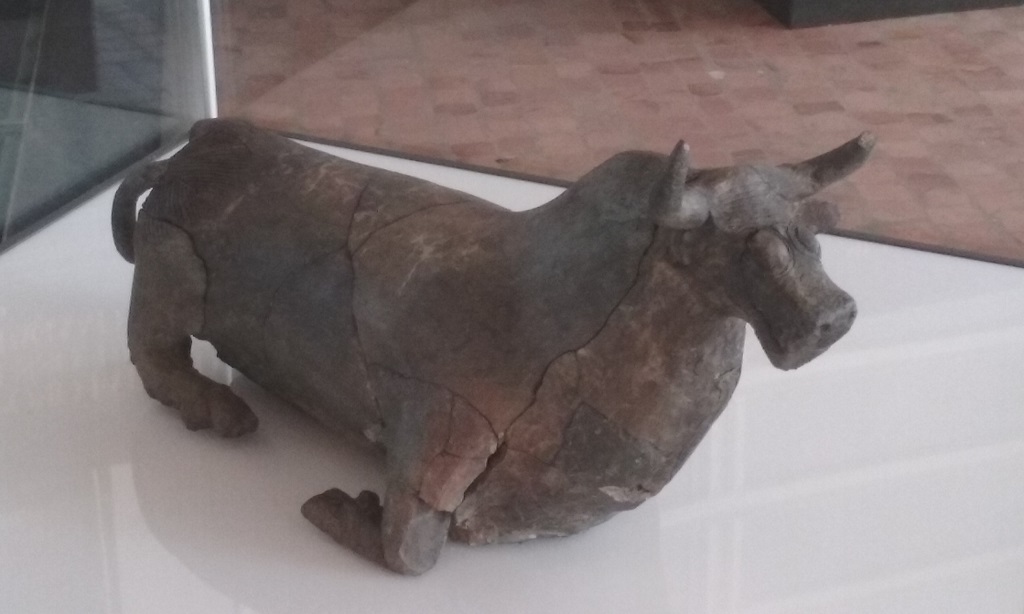 On our walk to the castle, on the other side of town, we stopped at the Praça da República for a light lunch of a simple, but tasty, Portuguese soup.  We noticed that there were only a handful of other people on the Praça.  Granted it was Sunday, but still there was a bit of a desolate feel.  Although it may not be totally fair, we commented that Beja was the Portuguese equivalent of a declining Midwestern town in the US. 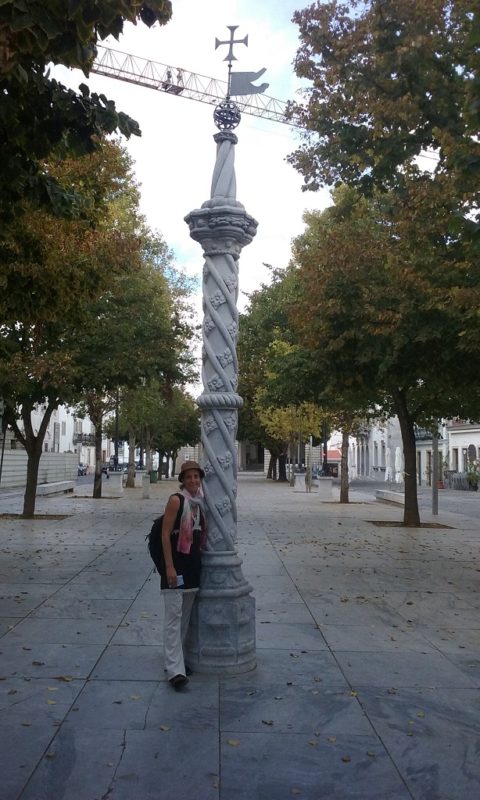 The Praça Was Tranquil and not at All Touristed

Castle bound, we noted some interesting things in unexpected places.  For instance, we wandered down an alley with homes that were in a state of disrepair.  When we looked up, one window on the block was a piece of intricate and beautiful Manueline stonework.  We also noticed that the color combinations of the buildings were different than those we had previously seen.  A lot of the buildings featured more green amidst the blue and yellow tiles. 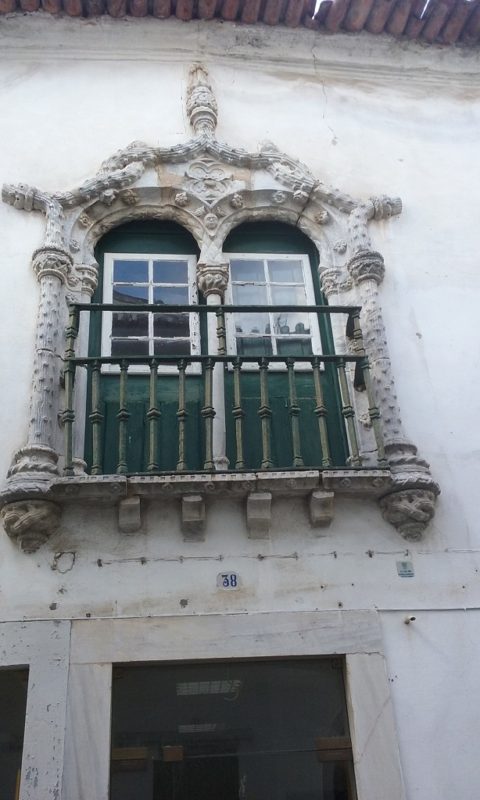 Manueline Window Was Seemingly out of Place

The Visogothic Museum featured artifacts from the sixth and seventh century.  The museum featured some very old columns, but we honestly were unable to figure out exactly their significance.  This was one place where we felt that not being able to read Portuguese, hindered our ability to appreciate what was on display.  Deservingly though, these artifacts were housed in Portugal’s’ oldest building.

We finally made it to Beja’s castle and I am happy we took the time to do so.  While I was thinking we might get castled out, this one was unique.  Inside of the medieval walls, stood the bright yellow governors house, which was restored but was clearly built centuries later.  It had since been turned into a tourist office and a café.  We climbed the keep, which is the main tower of the castle, where the headquarters for defense lookout were located.  Every town wants to rightly claim a few superlatives and Beja has the highest keep on the Iberian Peninsula.  It overlooks miles and miles of wheat fields and what must be the highest wheat elevator on the Iberian Peninsula as well. 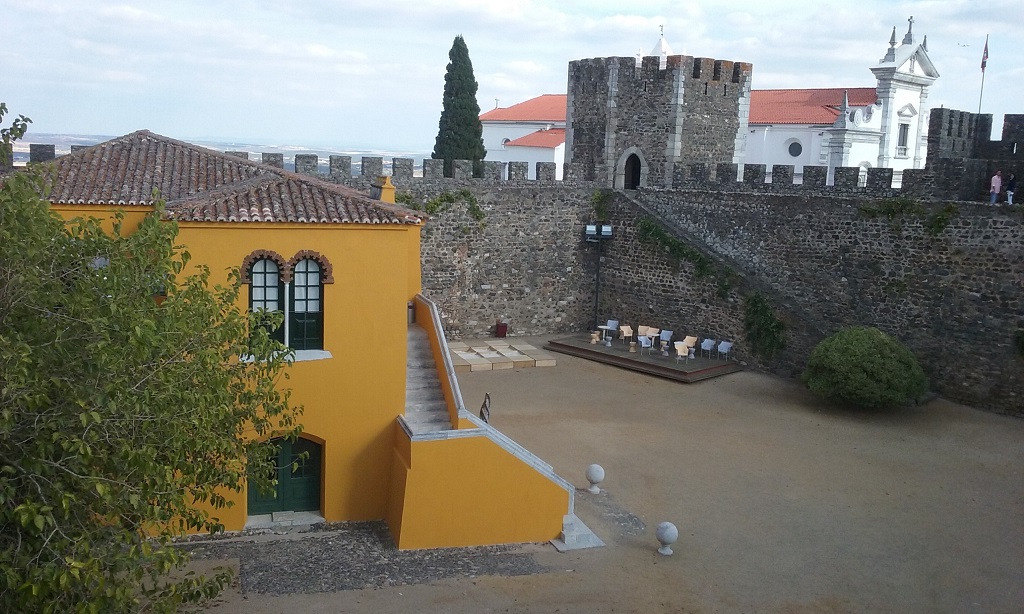 A Modest Castle Yet the Well-Worn Staircase Was All Marble 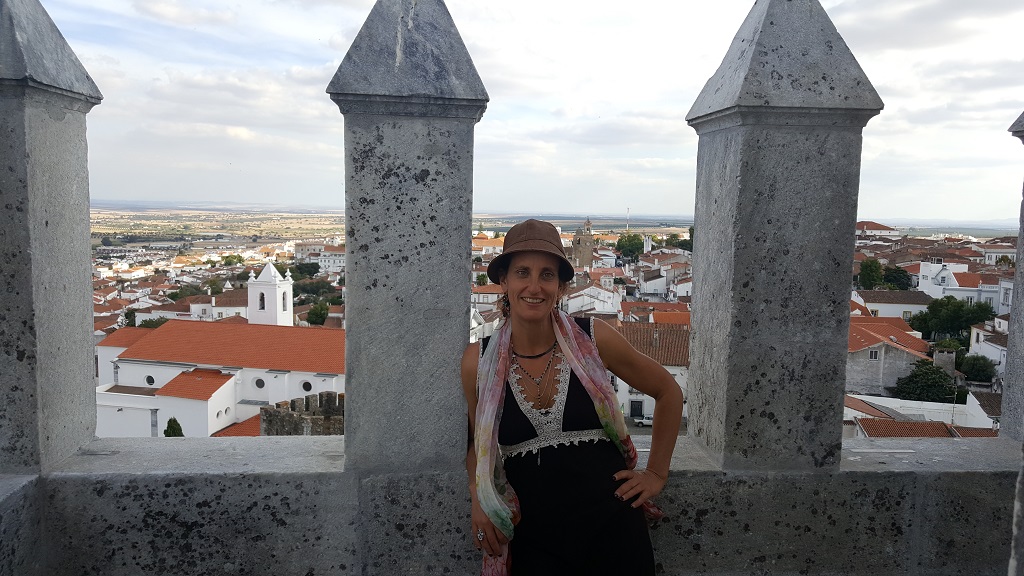 Back at the pousada I researched options for dinner.  Being Sunday, there weren’t many options, but we found a very traditional low key local spot.  Once again, we struck a place where we were the only non-Portuguese speakers.  We got some traditional fish stew with codfish and hake and another codfish and veggie dish.  Simple and light suited us just fine tonight.

Beja is small enough, that we easily did a couple more rounds around town on foot.  In the tranquility of the town and the light of the full moon, we transported ourselves back to the 1500’s, when we stood in front of the castle.  The moon cast its light on the silvery leaves from the fruit filled olives trees with the glowing walls of the castle in the background.  We were enchanted, to say the least. 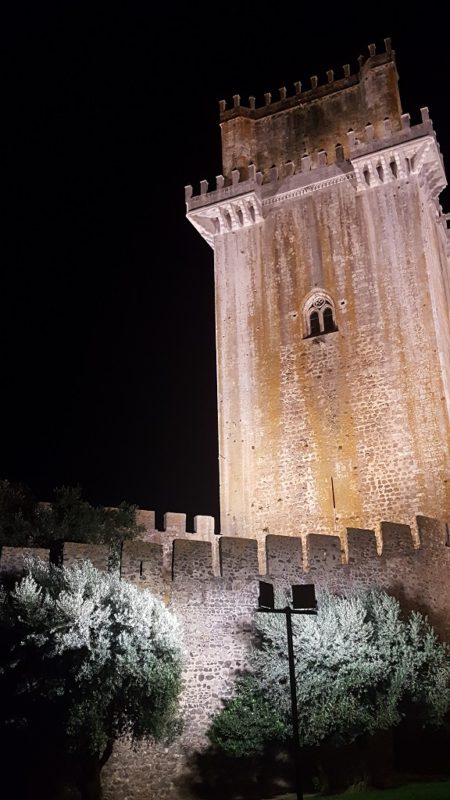