Alcoutim to Palace of Estói 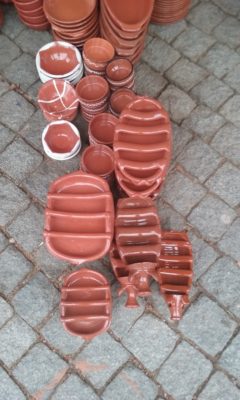 Oct. 18: We awoke this morning knowing that our Alentejan chapter was complete.  With no sense of urgency, we took the better part of the day to head south and land in Estoi in the Algarve region of Portugal where I am now writing.  The Algarve is the southernmost portion of Portugal.  It runs the width of the nation for about 100 miles and goes inland 25 miles or so.  As far as land mass goes the Algarve is just a fraction of Portugal, but it is a heavily visited section.

Although we were aware this was a pretty developed region of Portugal, we were interested in the beautiful rock formations and beaches that we had seen and read about in our research.  Based on that research, we decided to stick to the less developed towns.  And also, by going in October we took solace that we would avoid the summer tourist season.

So, in the morning, we departed Beja and drove south, more or less paralleling the Guadiana River and the Spanish border.  On the way, we stopped at the little riverside village of Alcoutim.  Most villages we had visited sit perched atop hills.  This one was different in that we wound down from the plateau into the river valley.  It was pretty idyllic and we could see Spain across the river.  The Spanish town looked like the mirror image of Alcoutim.  If the weather had been better, we could have just swum across to Spain!

Across the Rio Guadiana Is the Spanish Village Sanlúcar de Guadiana

Upon arrival we checked out a highly recommended restaurant that we read about in the Lonely Planet.  The outdoor grill with a variety of seafood going on it certainly looked inviting.  And the crowd of locals and tourists waiting for tables made it clear that the place had something to offer.  However, we really didn’t want to spend the afternoon in Alcoutim, so we set out to look for an alternative.

We spotted a place on the plaza with outdoor, communal tables and plopped ourselves down to give it a try.  It was apparent that we were getting closer to the ocean, as tuna and sardines dominated the menu.  But what ended up being the best part of our visit to this village was that Dan was able to have a conversation with the French couple who shared our table. 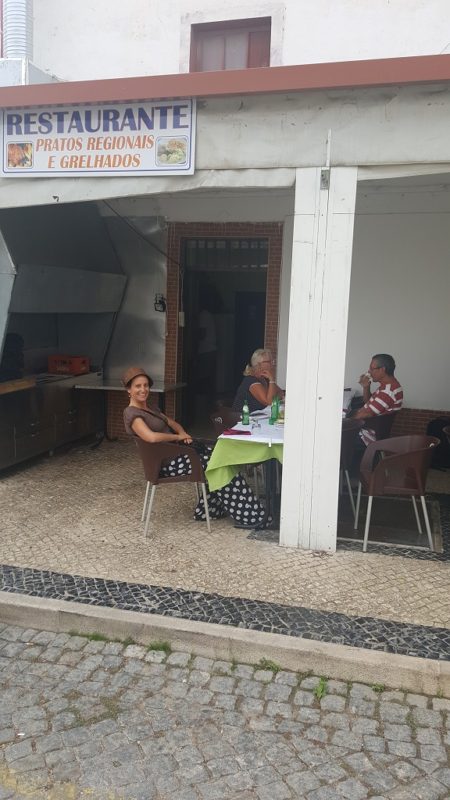 They proudly shared stories of how their son had traveled extensively around the Southwest US.  Since they vacationed regularly in the Algarve, they had a wealth of knowledge of what to do.  They even made notes in our guidebook of where the good beaches were.  I was curious about the town of Castro Marim, since I had read about its salt pans.  They looked at me and said “non extraordinaire”, as in don’t waste your time.  However, we ended up going to see the salt pans anyway, to compare and contrast with the ones we saw in Provence last year .  They were sort of interesting in and of themselves, but the French couple were correct that the town of Castro Marim was “non extraordinaire.” 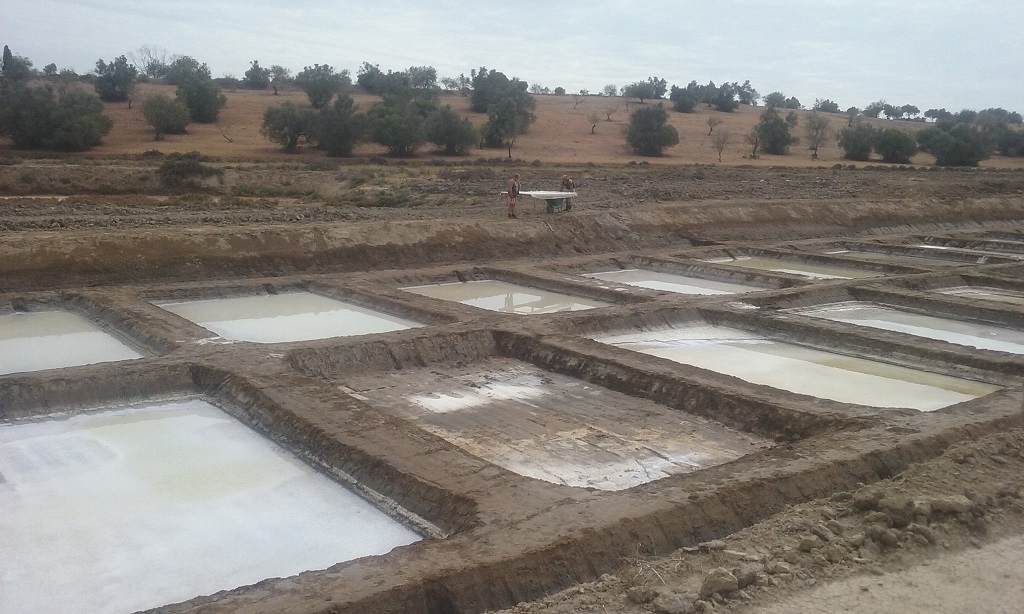 The Salt Pans at Castro Marim

Our drive south took us roughly to the coast at the eastern border of Portugal with Spain.  To head west to Estoi, which is just north of Faro, we had the choice of the newer, major inland highway, A22, or we could follow the older road along the coast.  It was my naive assumption that it would be more interesting and scenic if we set out on the old route.  Wow.  The level of development totally surprised us!  It is only exaggerating slightly to say that it was almost continuous strip malls into Estoi.

So it was an “interesting” drive as we peeked into what newer and less conscious development looked like in Portugal, but it was certainly not what I would call “scenic”.  After our recent delightful drives through the rural Alentejo countryside, it was not really what we had bargained for.  But we persevered, while I cursed myself for my nativity, and we eventually made it to the Palace of Estói, Pousada Palácio de Estói .  Now this pousada really perked us up.

It was tucked away in a neighborhood that seemed to be a bit on its heels, but we turned down a skinny deserted alley and wound down and there it was.  It was gorgeous!  We checked into our room, which turned out to be a suite of regal proportions.  There was nothing stuffy about it, but  it was well appointed and very comfortable.  I like my accommodations to be appropriate to the type of adventuring that I am doing, although it is not important that they be overly sumptuous or luxurious.  However, I will admit that it is fun to enjoy a place like this every once in a while.  Dan and I joked that the bed was our own private football field.  I had a blast trying different poses in this setting or that setting, acting like I was giving orders in my own private palace. 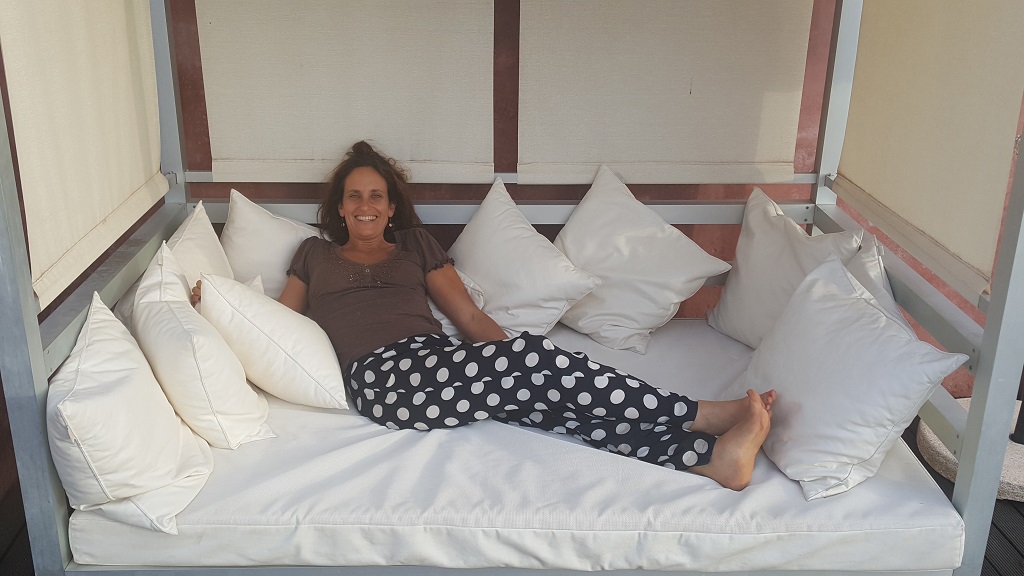 Checking Out the Palace

Naturally, we checked out the palace and the grounds, complete with beautiful vistas to the south and west.  The spa’s windows allowed us to drink in the views.  Since Dan had the forethought to bring some of Alain’s chocolate, we imbibed in that as well.  For a slice in time, we joined the royal family. 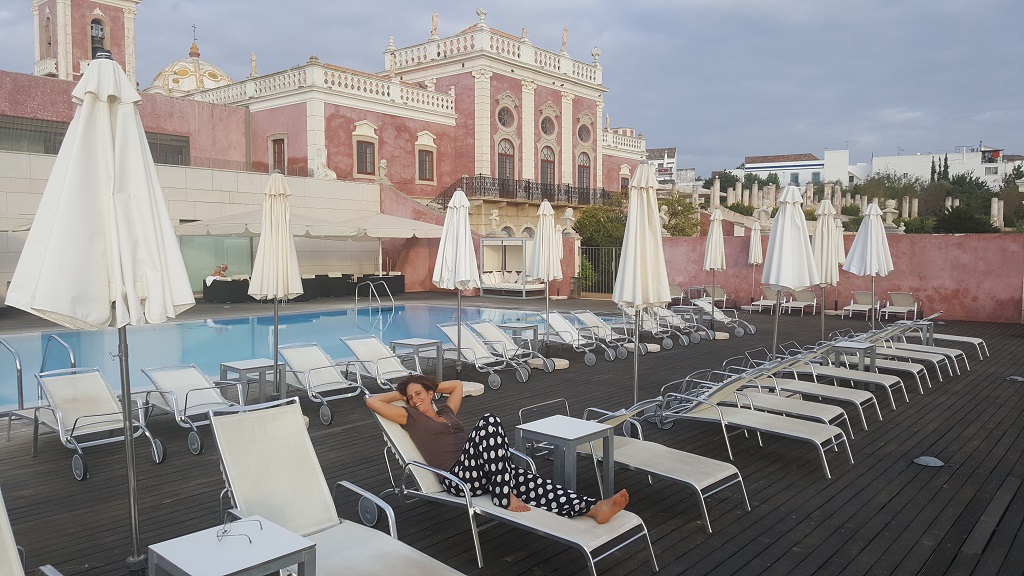 Dan said we couldn’t have only chocolate for dinner so we had to decide where to eat.  Since getting in the car was the last thing we wanted to do after our lovely strip mall drive, we decided to give the Pousada restaurant a try.  Upon receiving the menu Dan said, I don’t want to get my hopes up, but this looks pretty good.  It was a good thing that he did not get his hopes up!

Unfortunately the food was absolutely horrendous.  The roux for the chestnut soup was botched and the soup tasted like flower paste and that is putting it in a good light.  The squid was so overcooked that it morphed into mushy slime.  Then the stuffed figs turned out to be totally dried out and filled with a bland, tasteless cheese stuffing.  And it never got any better!  The salad was comprised of wilted greens and they were not supposed to be wilted.  And I swear the dressing must have been made from the cookbook “The Worst Recipes on Earth.” Or, if not that, it was purchased off the remainder shelf of the Faro big box store.

When the server asked about dessert, we couldn’t bear the thought of what monstrosity might arrive on our table.  We had had enough and demurred and made a beeline for the exit as quick as we possibly could.  Unfortunately the service was pretty well paired up with the food.  For this slice in time, our feelings of royalty were clearly robbed.

Dinner did however provide us with some good laughs as we paraded around the palace checking out the views from our ramparts before retiring to our royal suite.

From Our Drive to the Algarve 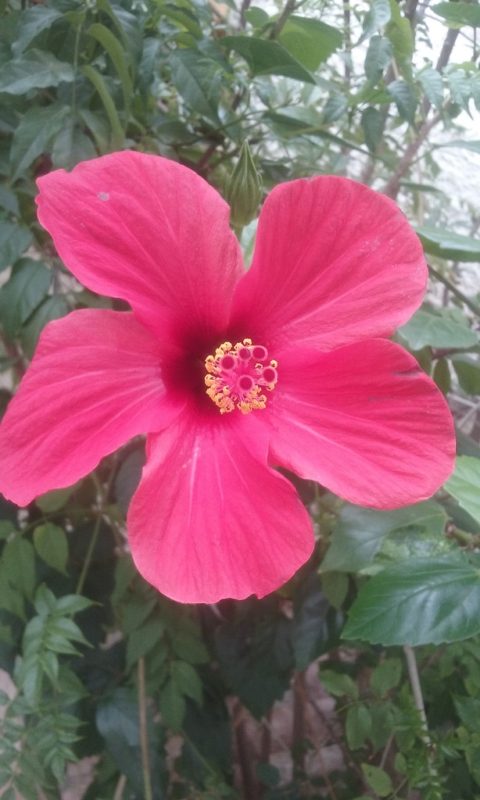 Hibiscus is Beloved All Over the World 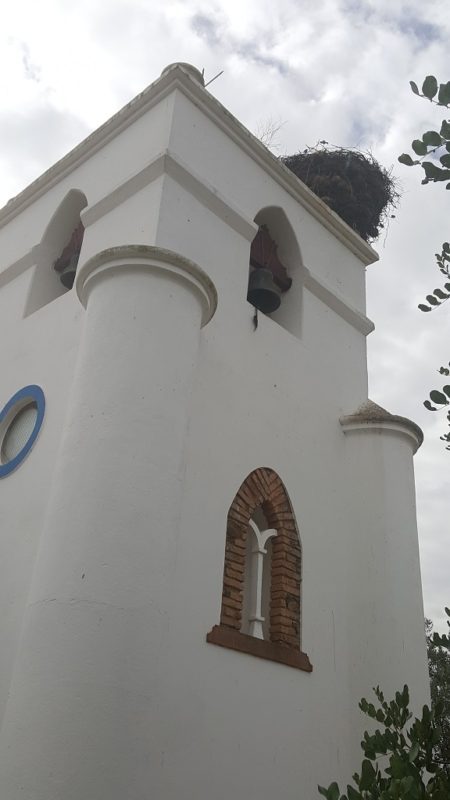 A Luxury Stork Condo on a Church Tower