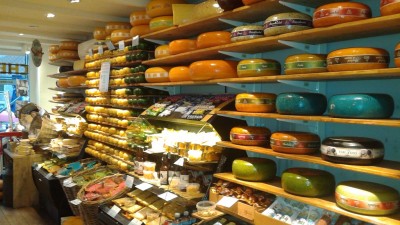 The Netherlands Have the Claim on Gouda

I woke up and was itching to get my body moving.  So I started with a long bike ride outside of the city.  The open roads and exercise felt incredible and the scenery, well, not so much.  I headed northwest from Amsterdam and basically got a good view of garbage barges, a lot of factories burping polluting smoke, and windmills.  But not the bucolic ones that make us think “the Netherlands”, just the huge, modern ones that get bad press for killing birds.  I had only seen them from afar before while driving, and now, getting right up to the base of one, gave me a sense of how tall they really are. 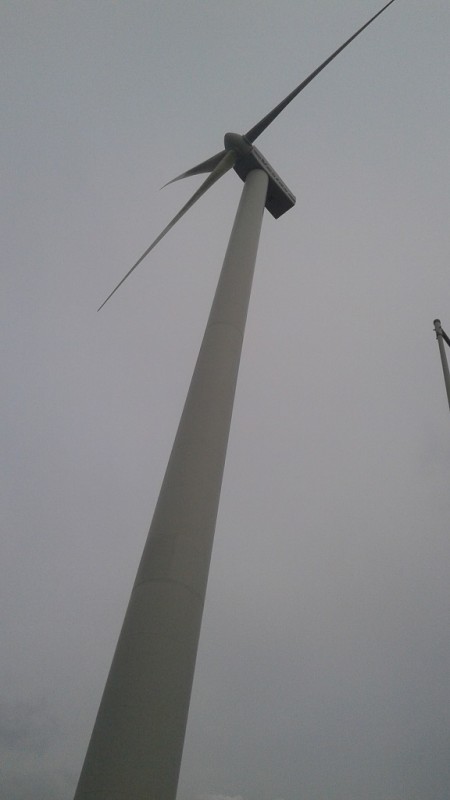 I passed the ferry at the end of the city and I realized that, if I wanted to get to a cute, rural town, with fields of tulips and old style windmills, it would have been more easily accomplished by taking the ferry north and then biking from there.  Oh well.

On the way back, I rode through the west Jordaan neighborhood – very cute!  Gentrified, if you will from what used to be a worker’s quarter and it now hosts lots of interesting markets, shops, galleries, and boutiques.  I was pretty hungry after all the bike riding so I did not linger, but if I have time, I think I would like going back there to wander a bit more.

I was looking for a particular café that got a pretty good write-up in the LP guide, but it apparently is no longer there, so I went to a nearby Argentinian restaurant.  The food was really not very good (the chimichurri, the national sauce was horrendous), but again, it didn’t take very long, and at this point in time, I was just fine trading in quality for a shorter meal.

It often seems like I prefer to give some of the big attractions in favor of doing a few, smaller, and more digestible ones and then target a couple bigger ones that feel like must do’s to me.  Anyway, just a block or so from Anne Frank Huis, I went to the Cheese Museum .  Upstairs, was a store with samples and downstairs was a small area with cheese making equipment and information on how the cheese in made.  In the Netherlands, Gouda rules the roost.  It seems like they make this one style of cheese, which happens to be from cow’s milk, and within it, there are many, many variations.  Just based on age alone, there are 7 different varieties.  And then when one considers the herbal additions – the variety is rather impressive.  I will admit, Amsterdam is not going to beat out Paris in a cheese contest (or any food contest, with possibly the exception of beer), but walking around, and tasting over 30 different types of Gouda was a lot of fun, and nourishing, after the bike ride.  Nettles gouda, cumin gouda, blueberry gouda, you name it, they have it gouda.  I ended up leaving with a goat cheese black truffle gouda, and the most flavorful of the whole place, a farmhouse gouda that was aged for 6 years (amazing!).  As it ages, it develops some caramelized sweetness that can only be fully appreciated by tasting it. 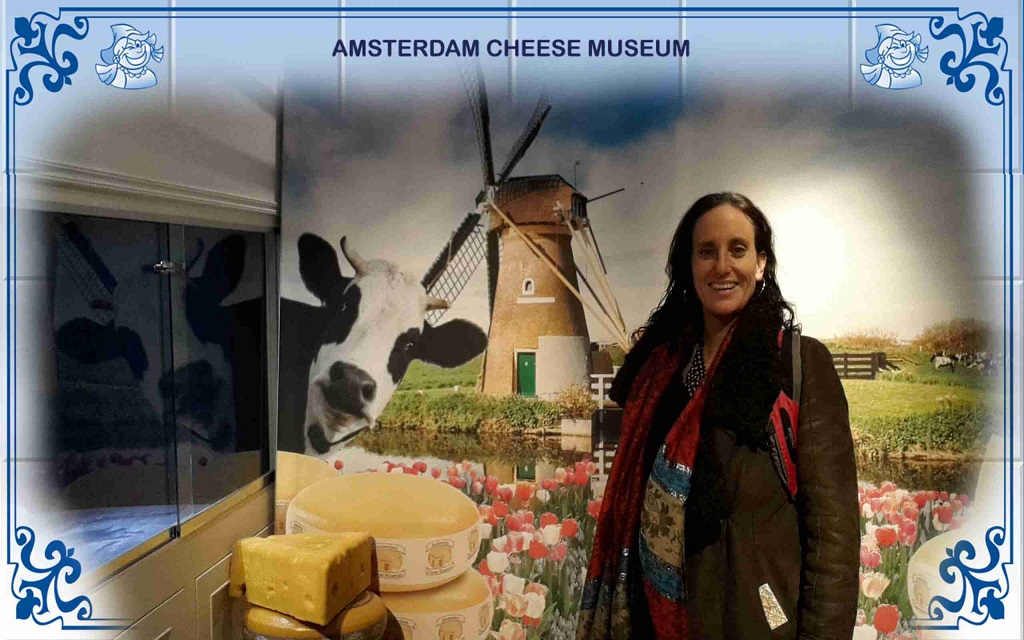 One of the Most Delicious Musems I Have Ever Visited

Right next door, was the tulip museum.  I had known a little bit about tulips from reading Michael Pollan’s, Botany of Desire, and this modest sized museum covered some of the same material as well as more specifics about the big tulip players from years back and about current cultivation practices.  Tulips were first brought from Turkey to the Netherlands in 1554 and soon the tulip trading frenzy had gotten so out of control that three bulbs of the most desired varieties were selling for as much as the most expensive canal home in Amsterdam.  Hard to imagine!  In 1637, the bubble burst, yet, interestingly enough, the most sought after variety, Semper augustus still held its value.  The tulips that were most prized, had streaked petals as opposed to single colored petals.  They are very enticing to look at.  Ironically, it’s a virus that causes this color variation, and it takes longer to breed them, henceforth, making them even rarer.  Eventually, they get very weak.  But in this state of compromise, the beauty is bold and draws us humans in.  Michael Pollan is so right – the tulip has tricked the humans into cultivating them in such abundance!!  In fact, the tulip has tricked us humans into building a museum in its honor and filling up an entire room with giant polychromatic pictures of these gorgeous specimens, making us plant lovers salivate and gravitate to the gift shop, stuffing our backpacks with bulbs that will yield the most unusual colors and patterns every April, taking us on some sort of virtual psychedelic trip.

Semper Augustus Is the Most Revered Tulip in History

Just a jaunt up a few streets, is Museum Ons’ Lieve Heer Op Solder, which translates to Our Lord in the Attic.  From the outside, it looks like any other canal house.  Inside, is stashed an entire Catholic church, which can accommodate 150 worshipers!  Through the years, the Catholics and Protestants have gone back and forth repressing each other.  At one point, when a nearby Catholic church down the street was converted to a Protestant church, a local resident Jan Hartman converted his home to a place of worship.  The home also has quite a few artifacts from 17th century living.  Art, furniture, kitchen equipment.  The LP guide listed this museum as one of the most unappreciated museums in Amsterdam.  I can’t compare to others, but this is quirky and fascinating and well laid out, and perhaps not as big on the tourist circle, but well worth a couple hours of your time. 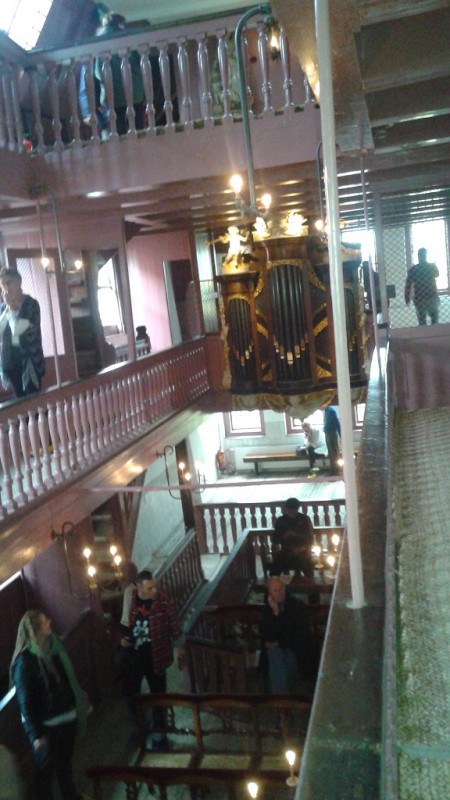 A Church Is Hidden Inside of a Canal House

It was a pretty rainy, dreary day, which I am used to living in Oregon.  It doesn’t bother me, it’s actually welcome after a dry, hot summer.  And with some time to spare before going out at night, I went to Sauna Deco for the spa like experience.  This is about the coolest version of such a place I have ever visited.  It is as large as gym would be and it was only focused around water and heat therapy.  There were private infrared saunas. Two larger sauna baths.  Showers with interesting tile work. A room with wooden lounge chairs to relax and cool down.  Regal chairs to sit in and enjoy foot soaks.  Steam rooms.  A very chilly pool to counteract the steam room.  And also a modest café, which served light fare, salads and smoothies and juices.  The entire place was decorated very comfortably, perhaps with a Parisian flair, with lots of turquoise used and a generous use of wood and metal for both decoration and to separate room and areas.  I can’t speak for the Dutch in general, but at Sauna Deco, people were very comfortable with walking around completely nude.  In the states, a place like this would have either separated genders, or required a certain level of clothing to be worn in the open areas.  It was a bit of a maze getting around as the place is so big with hallways to take you here and there.  I indulged for a couple of hours alternating between using the dry heat, the wet heat, and the cold water and the café and relaxation areas.  I could see if I had more time in Amsterdam, how I could laze away the better part of a day at Sauna Deco, moving from one treatment to the next, as well as utilizing their other spa services like massage and body treatments.  The Europeans in general, have a long tradition and greater understanding than Americans of the benefits of taking in the water.  They understand that doing so can help the body eliminate waste more effectively and tonify the immune system.  Sauna Deco is a living, breathing hydrotherapy spa and I would call this a must do in Amsterdam. 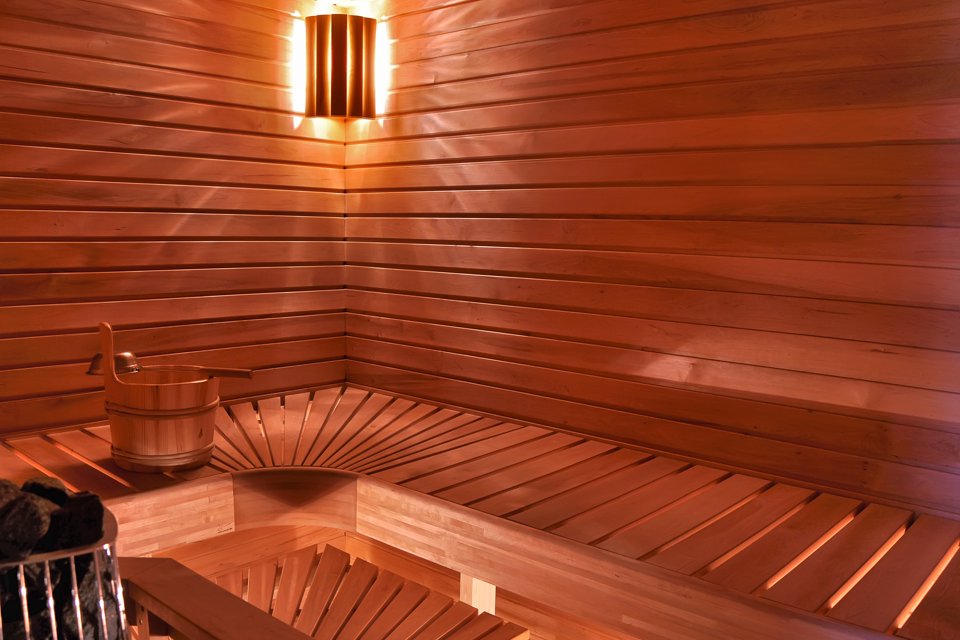 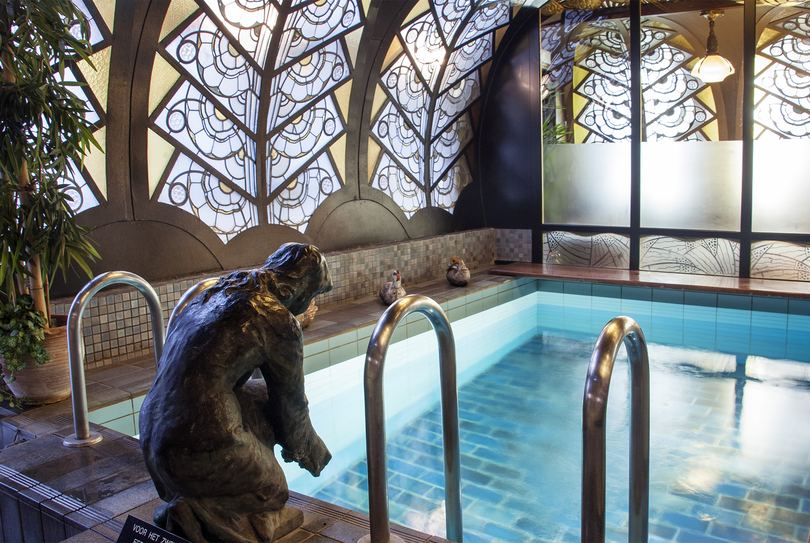 I went home to unwind before going out for the evening.  A man who works at Cocomama was giving a tour of the red light district and I thought it would be fun to go in a group.  I waited around, and as it turned out, there weren’t enough people to do the tour, so I went out on my own.  Now part of what makes Amsterdam’s red light district unique is the way it is just out there in the public, mixed in with the churches, and train station and residential apartments.  That is pretty cool.  Walking by and seeing about 80% of the women fidgeting with their smartphones was pretty boring, to be honest.  I can see why the hordes of young, drunk, male tourists are enamored, but honestly, this was about the most disinterested group of people I have ever seen at work.  Talk about overrated!

It was rather late at night and I enjoyed walking past the canals, admiring the lights that adorn them, and making it back to Cocomama to hit the hay.