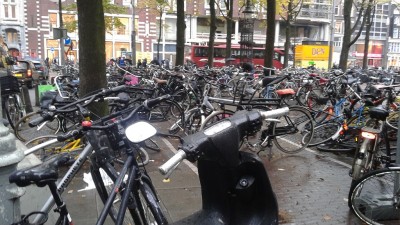 Bikes Rule in Amsterdam and Cars Had Better Watch Out

I was interested in doing a Jewish day in Amsterdam.  I had done one in France and, being Jewish, it just made sense.  I biked to Nieuwmarkt, which is very central to the city and where the Jewish history and current culture is centered.  First I had a late breakfast at an Indonesian deli, which was pretty good, although I asked for the spiciest dish they had and it was barely spicy.  The Dutch have had relations with Indonesia since the days of the spice trade and it was a colony until the mid-1900’s.  Yet remnants of this relationship live on and there are a good number of Indonesian restaurants in Amsterdam.

On route for the day, I did get sidetracked, into an English used bookstore.  It was cozy and crammed with books, with a general method to the madness, but the type of place, one needs to search to discover what calls to them.  A book called “Sacred Food, Cooking for Spiritual Nourishment.”  Anyone who knows me, knows I believe eating food can and should be a deeply nourishing experience that goes far beyond just the physical aspects.  I scored!!

Waterloopien flea market goes on six days a week.  It currently sells everything – funky clothing, pot medibles, bicycle gear, stickers, art, and the like.  The market has been around since 1880, and was started by Jewish traders living in the area, who needed a place to sell their wares.  I ended up with a second hand (if not third or fourth hand) hat and a scarf made from pole fox.  The scarf still has the fox head on it — one never knows when they may need this.  Plus, I can’t wait to freak out politically correct people at home. 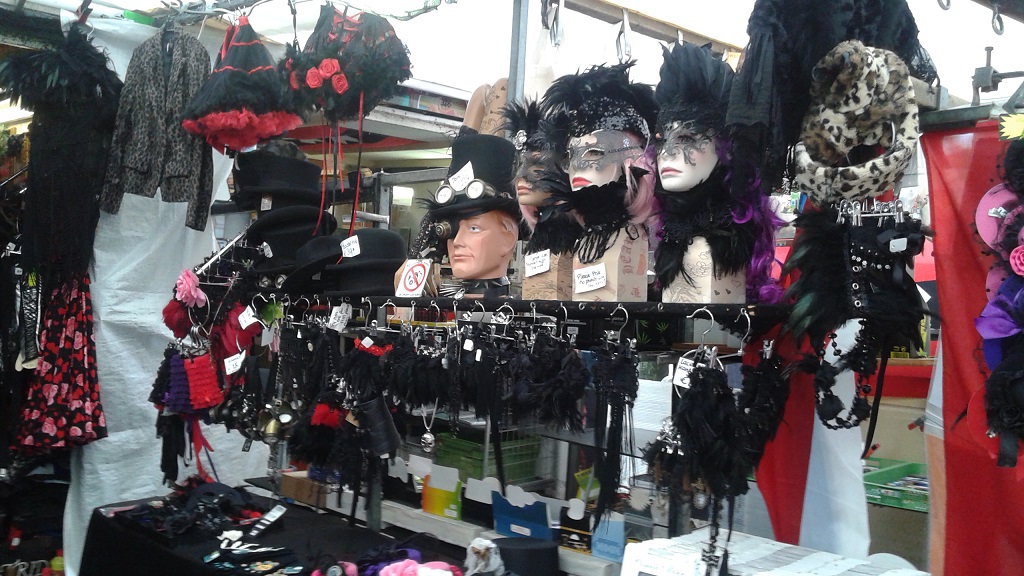 Woaterloopein Market Is Quirky For Sure

Next stop was Joods Historisch Museum, the Jewish History Museum.  It is housed in what used to be several synagogues.  The section that was about the general nature of the religion featured a lot of basic items used in ceremonies and everyday life.  Given my heritage, I was familiar with much of it.  The other two floors focused on history specific to the Netherlands, which I knew very little about.  The second floor focused on 1600-1900, a time when in general, the Jews were very poor and prohibited from joining many guilds.  Despite this, a small percentage of them prospered and started businesses in the industries of textile, diamonds, and finance.  The third floor focused on 1900-2000.  There was a section that explained how it was for the 18,000 Jews who survived hiding in WWII and who tried to assimilate into Dutch culture.  I was very much in appreciation of the fact that in 2010, the government make a public apology to the Jews for not having better protected them from the Germans.

Right across the street is the Portuguese synagogue.  The Portuguese Jews were fleeing persecution during the Spanish Inquisition, and the since the Netherlands was founded on the idea of tolerance of people’s differing worldviews, it became a safe place for Jews to settle. At the time it was built, in 1675, it was the largest synagogue in Europe.  If one has visited churches in Europe, this would be considered very modest in size.  It has no running water or electricity and the large candelabras are lighted to provide light, during the services, which still go on today.  I thought about how beautiful it would be to sit in there at dusk and watch the room glow with hundreds of candles. 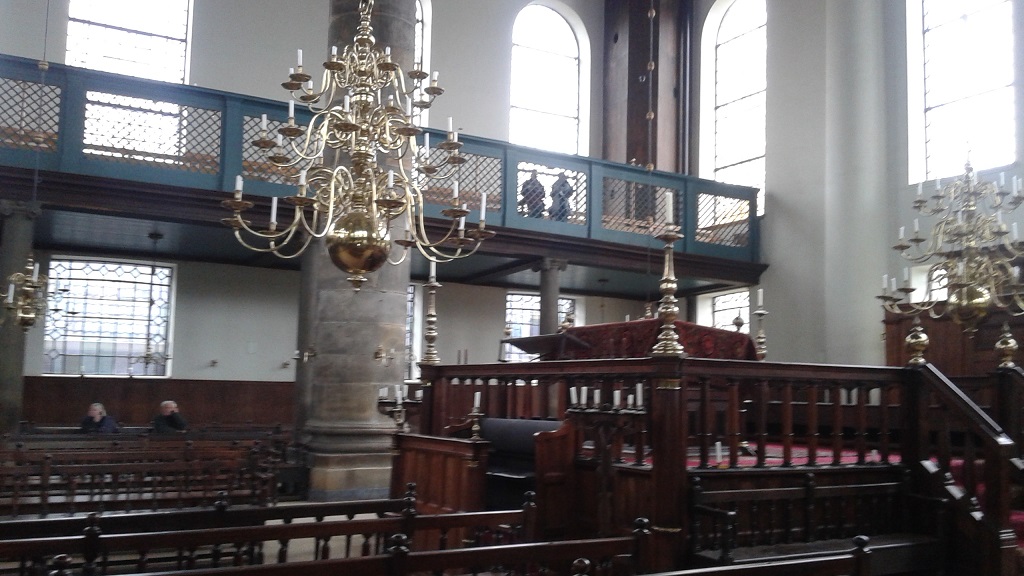 Inside the Portuguese Synagogue

A little way down the street, is a Holocaust memorial, called Hollandsche Schouwburg.  Although it is very specific in its purpose and despite its mostly having a dark story, there is a silver lining.  When I walked in, the man behind the desk went through a large photo album and told me personally the story of this building.  It was originally a theater for Jewish people to perform at.  They were not allowed to work in other theaters, but were allowed to have their own.  When the Germans invaded they turned it into a holding area, where once a week, a train came to deport the detained Jews to either a rural village, another holding area, or to Auschwitz.  The babies were separated from the adults and taken to live in a building across the street.  Apparently, the German’s had made the conditions of this area fairly tolerable, to avoid uprising.  The silver lining, when the train would come to load people, the view was blocked from the theater building to the building across the street.  Over time, there were sympathizers who successfully smuggled about 600 babies out of captivity to safety.  I asked the gentleman about the survivors and if there is a log of them.  There is not, but he said that over time, people have come to the memorial, now about 70 years old, and said they were one of the saved babies.  Like Anne Frank so eloquently stated, “Despite everything, I believe people are really good at heart.”

Once the war was over, the Jews got the building back, but they didn’t want it to be used for festive causes, so it was turned in a place of education and remembrance.  Like many memorials, there is a wall, with the names of people.  In this one, the names are specifically of the people who were held and deported from this building.  Of course, only a small number ever returned.

The last stop on my Jewish route was Gassen Diamonds, which sits on a rectangular island reclaimed in the late 1500’s by the Spanish and Portuguese Jews.  I am not sure, but I suppose that Samuel Gassen, who founded it, was Jewish.  It was a bit touristy/sales oriented, but the tour was informative, to understand how diamonds are assessed for quality.  And we could watch diamond cutters and polishers work their magic on these coveted rocks.  When the sales pitch component rolled around, I dodged out of there rapidly.

The Places Where Diamonds Are Mined

On the way home, I biked past the narrowest home in Amsterdam.  It is 2.02 meters wide by 6 meters deep.  The city, in general has very narrow homes, but this one is possibly the smallest self-contained home in Europe.  Why?  When the homes were built, they were taxed on frontage.  Obviously, someone did an exceptional job of avoiding the tax man at Oude Hoogstraat 22! 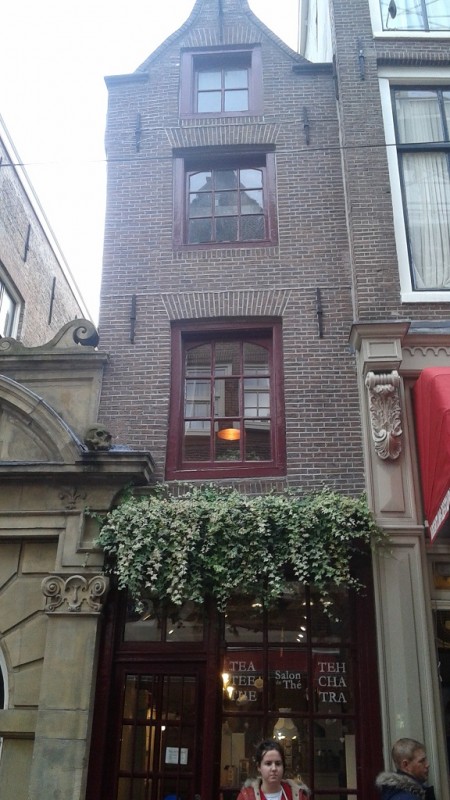 The Skinniest Home in Amsterdam!

I couldn’t resist a stroll through Bloemenmarkt, the flower market, on the way home.  They claim it is the only floating flower market in the world, but I thought I read about a floating flower market in Saigon when I was there, so who knows. Most of the bulbs were not permitted overseas, but that in no way stopped me from enjoying the seductive display that lay before me.  Tulips by far were the best represented, but lots of other bulbs that would yield colorful flowers found their way in bins there as well. 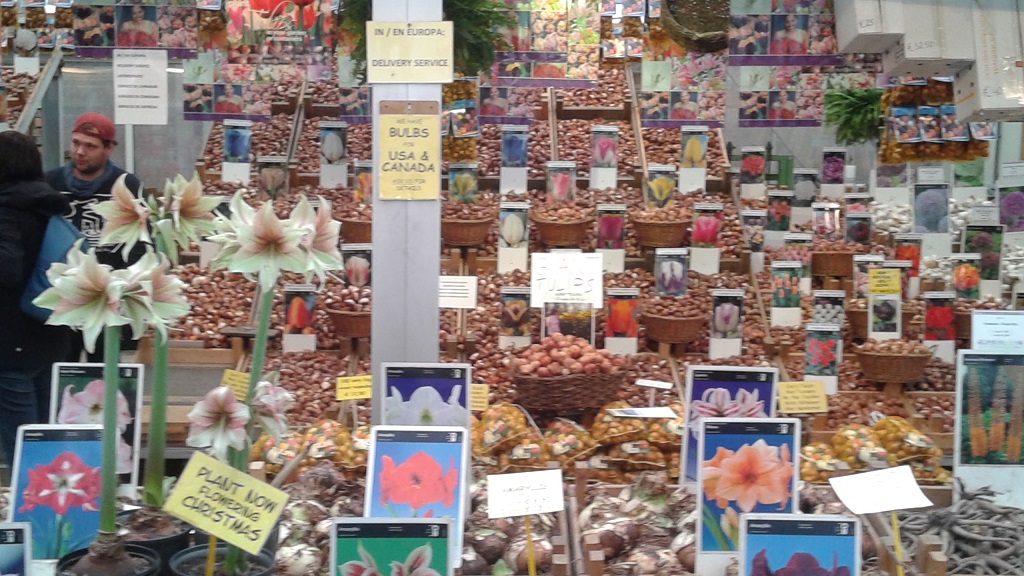 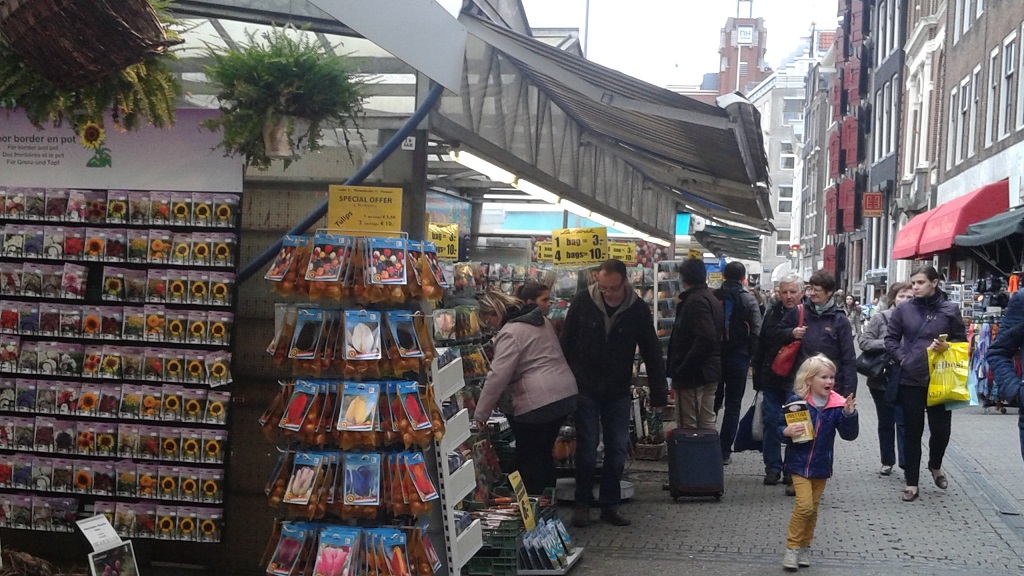 One of the Largest Flower Collections in the World

I quickly unloaded my stuff at the hotel and biked to the Vondelpark district to get some Ethiopian food.  It was pretty good, although they could have pumped up the spice factor a bit.  A very authentic place, friendly Ethiopian people and befitting African music – a nice find. 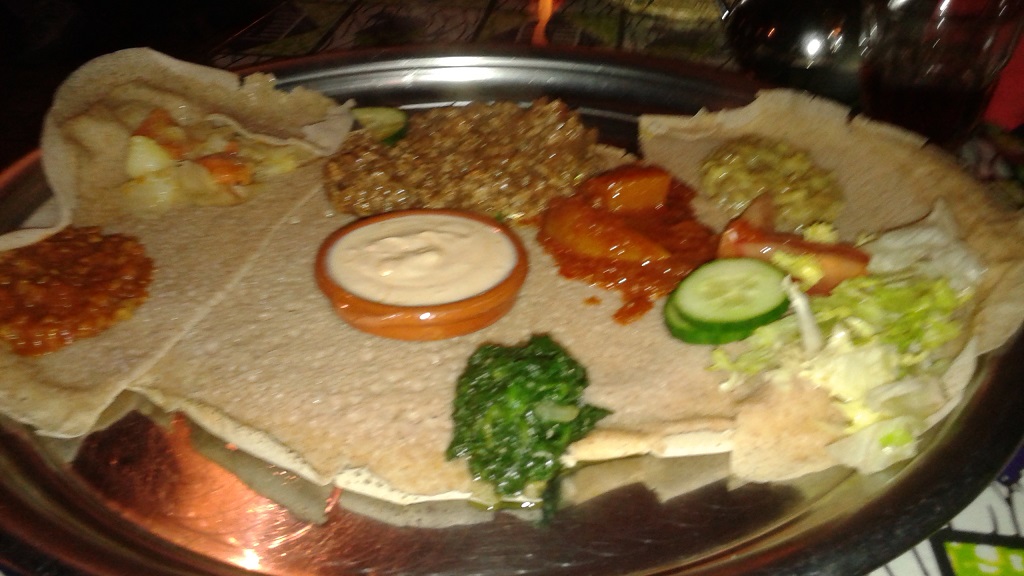 It Was Fun Eating Injera and Ethiopian Food in Amsterdam

On route to dinner, I passed by a yoga studio, saw there was an 8pm class, and decided to go.  Dinner was over by 7, so I took a walk for 45 minutes in Vondelpark.  It was just getting dark, so I couldn’t see much of it, but it was obviously such a wonderful place.  Tons of bikes, runners, groups of runners with red blinking ankle bands (looks very cool when they are moving in mass), tennis playing, happy children and more.  I am sure in the mix, were some lovers smooching and a fair share of stoners doing what they do best.  A great cross section of the citizens, all frolicking at this park that goes for over a mile.  Amsterdam’s version of New York’s Central Park! 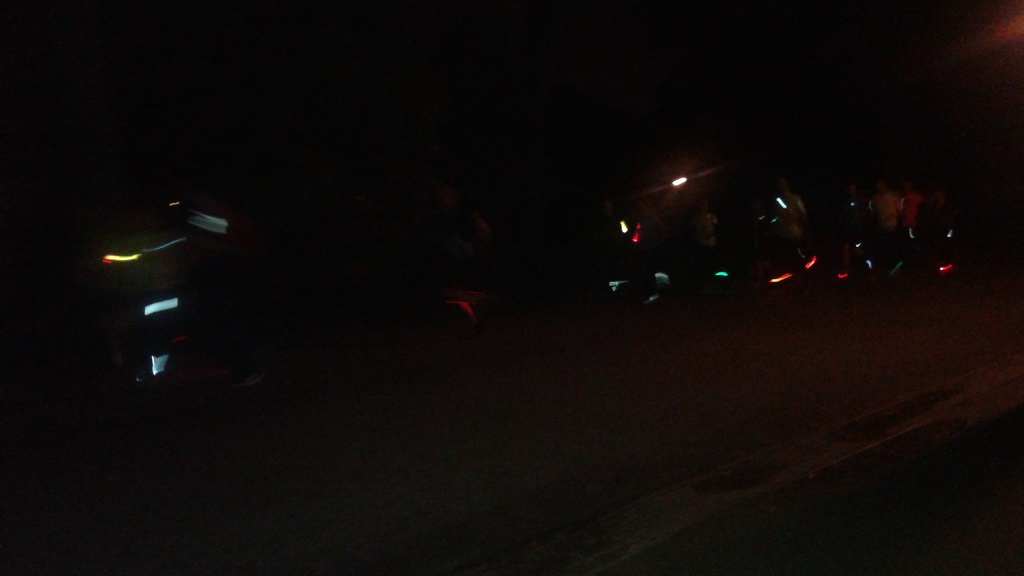 While This Photogragh Is Lackluster, It Was Fun Seeing Glow in the Dark Runners Pass me By in Vondelpark

When I got to yoga class, I discovered it was a 90 minute Bikram yoga class.  Let’s just say, I sweated enough to drench my clothes and then some.  Very intense, much needed – I felt so much better after going.

I went home, showered, and set out to cruise a couple of recommended bars from the guidebook.  Nice enough vibe, but the amount of cigarette smoke bothered me, more than a little bit.  I did sit down to enjoy a glass of lambic, which is a Belgium style beer.  I liked it a lot.  There is a lot of experimenting to do with beer in Amsterdam, but I am not the right person to do it.  For beer lovers though, Amsterdam is an enclave one could happily get lost in for a long time.  I walked home, along the charming canals and here I sit, writing about this little corner of the earth. 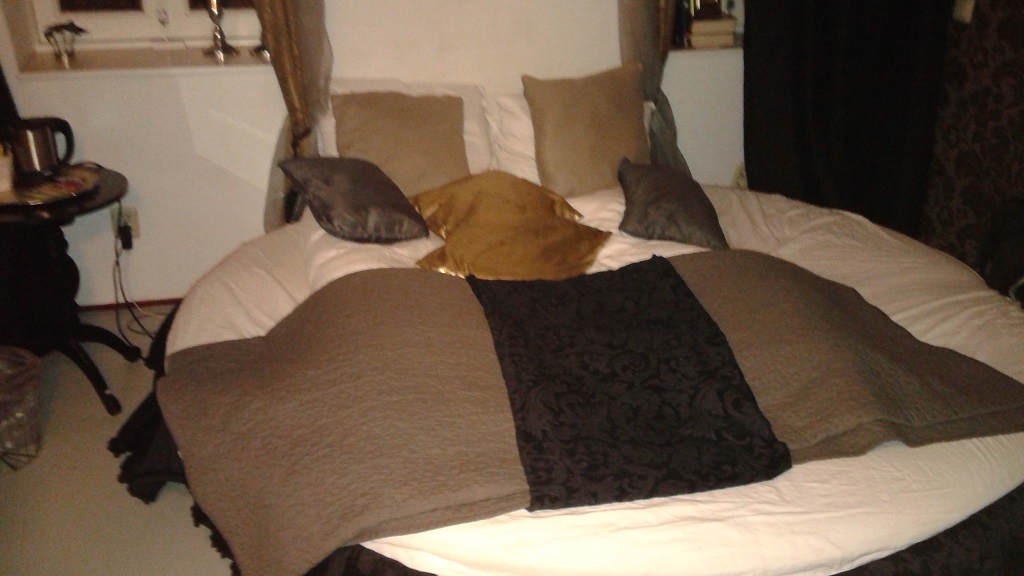 The Royal Room at Cocomama