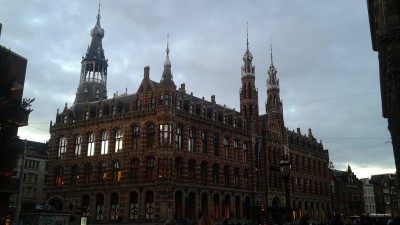 An Example of Dutch Architecture

Now I sit at Cocomama, an upscale hostel/hotel in Amsterdam, converted from a brothel 10 years ago.

Dan and I said our goodbyes early in the morning; he was off to the States (he’s probably going to land in San Francisco in the next couple of hours); and I was off to Amsterdam. I arrived by 2pm and went to Cocomama. They kept my bags and I went for a stroll as my room wasn’t going to be ready until 4pm. They gave me a nice map of this compact city and highlighted some of the areas that may be of interest to me. I stretched my legs exploring the southern canal ring, which will be my home base for the next few days. I got a bite to eat and I will tell you that while it really wasn’t very good, it was quick. Honestly, the two hour lunches were starting to give me ants in my pants, otherwise known as sphlikes, in yiddish!

I have to give the Dutch credit, in that they are all bi-lingual or at least the urban folks are. From the perspective of expansion, it’s wonderful to be in a place, listening to another language, and realizing that our world view is but one of many. From the practical side of being able to navigate logistical aspects of traveling, and the simple ease of communication, being in an English speaking area is quite nice. Also, when the Dutch speak English, they have an American accent. When they speak Dutch, they have a Dutch accent. I can only guess that they are taught English from a very young age. This is unlike the French, who often speak English with a strong French accent. 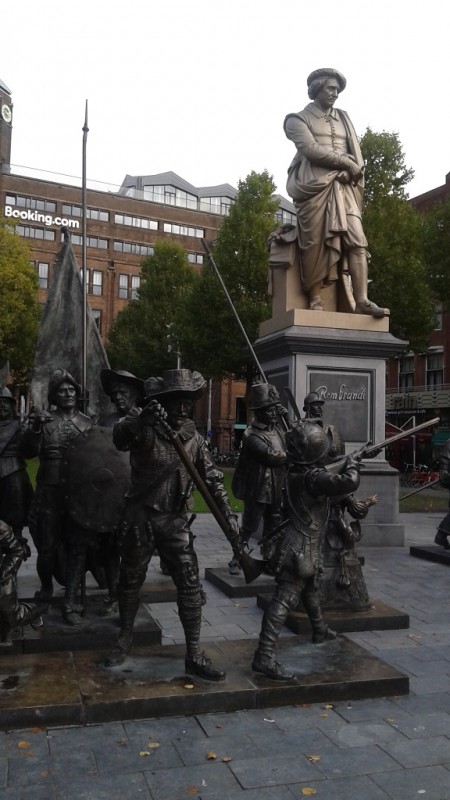 Remembrantplein Square Is the Place to Hang

I enjoyed seeing the statues on Rembrandtplein Square and the flow of people walking up and down the streets running alongside the canals, which are as cute as can be. I returned to my hotel and relaxed for a bit before heading back out to Anne Frank Huis. This was for sure, on the top of my to do list and since daytime queues can reach up to four hours, I purposely waited to enter at night. It was about a 45 minute wait to enter. The museum is set up in a way that one can only enter and proceed in one particular route. There are a lot of rooms and many of them are small. So to prevent further congestion, it was set up with the controlled circulation. Obviously her home holds historical importance and people from all over the world want to see it. But beyond that, it holds personal importance to me. My mother was conceived in Germany in 1939. She was born in the states in 1940. Her mother, was one of the very lucky people was able to safely escape Germany and avoid the fate of the concentration camps. Anne Frank, just one teenage girl, serves as a symbol for the thirteen million people who were killed by the Nazi’s.

The Queue Outside Anne Frank’s Home Is Often Four Hours

Touching, would only begin to describe what a walk through her home was like. The walk started in the part of the building where her father, Otto ran his business, making pectin which was used in jam. He went to work every day and the employees (except for a couple), didn’t know that seven other people were hiding upstairs, in the Secret Annex. There were quotes written on the wall, taken from her diary. Some of them, were very poignant. “How wonderful it is, that nobody need wait a single moment, before starting to improve the world.” When Anne had to share her bedroom, which was tiny to begin with, with Mr. Dussel and she really didn’t like him so much, she stated “But you have to make sacrifices for a good cause, and I’m glad I can make this small one.” People tended to be very quiet when touring the home, and I believe it is because it is such a deep experience, one simply doesn’t have words and they need to just experience their feelings.

At some point, we exited the pectin factory, and climbed behind the bookshelf which hid the stairway up to the Secret Annex. I was getting claustrophobic and couldn’t even begin to imagine being stuck there with no fresh air or daylight for two days, let alone two years. Anne decorated her bedroom with pictures from magazines her dad brought with them into hiding. The worn out pictures still remain on her drab walls and her comments about how much cheerier she has made her room brought tears to my eyes.

We eventually ended up in the room that has the famous diary. Seeing her small and neat writing, on the yellow pages was a gut wrenching experience. If anyone even gets close to Amsterdam, this experience is a must do. I hadn’t realized before tonight, but Anne also wrote short stories and was beginning a novel entitled “The Secret Annex” to describe her time in hiding. The diary was the centerpiece of the room, and along the walls were excerpts from other notebooks she wrote in once she filled up the original diary, as well as sections of other books she copied into her notebooks. 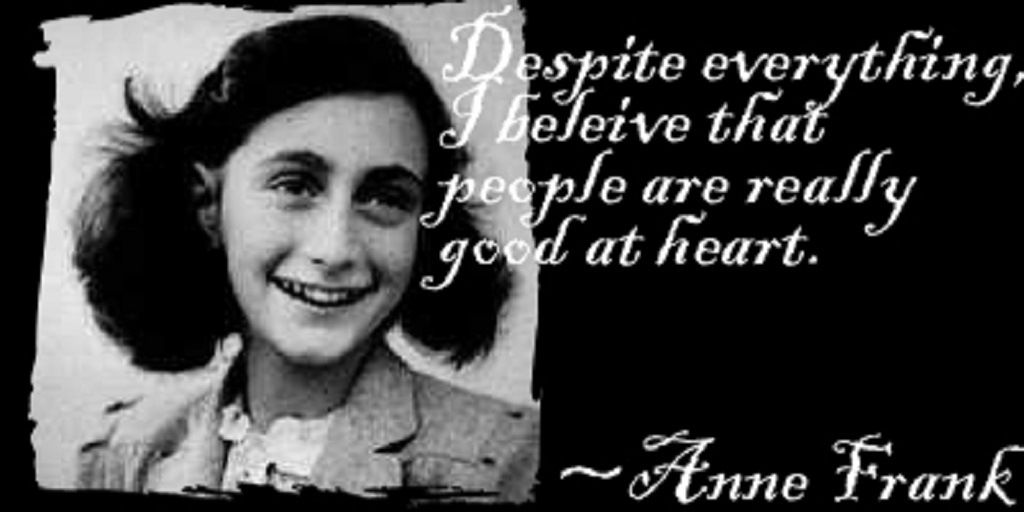 Anne’s Maturity and Wisdom Has and Continues to Inspire Millions

Another room featured the bag that Otto carried his couple of possessions home from Auschwitz. It was stained with blood. There was a story written about how he went to the train station every day in Amsterdam to see if his family had arrived. Day after day, he went, hopeful that some of his loved ones would emerge like a phoenix rising from the ashes. One day, he encountered a woman he knew before the war and she informed him that Margot and Anne were no longer alive. Once Otto read Anne’s diary, he worked tirelessly to get it published, in part, because it’s a story that needed to be told, and in part, because Anne wrote of dreaming of being a famous and accomplished writer someday. It became his mission to ensure that Anne’s wishes were actualized. Today, Anne’s book is one of the most circulated and well known books on the planet, being translated into 70 languages. In the gift shop, I picked up a book that was a new perspective on Anne. Very little is known about her life once she was captured and this book is a compilation of stories from six women who spent time with Anne in the last seven months of her life, in the concentration camps.

In a pensive mood, I went to a quiet brown café to absorb my Anne Frank Huis experience. Brown cafes are named such, because their walls have turned brown from the years of cigarette smoking that has taken place inside. Although these days, many of them only allow smoking outside the bar. These bars evoke feelings of coziness and in Dutch, the word to describe the feeling is gezzelig. I sat there quietly for a while having a light bite to eat (pub food was lackluster) and soaking in this quintessential Amsterdam experience. I did strike up some conversation with the bartender, who grew up in Amsterdam. I could tell she enjoys hearing the stories of the tourists who come in there. 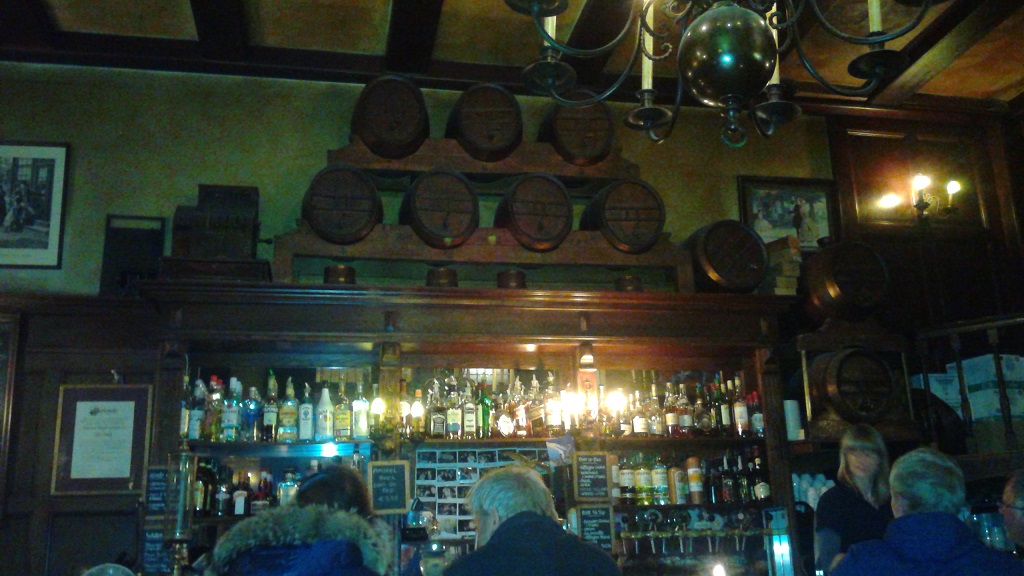 I was headed back to Cocomama, but got detoured on a night cruise on a canal boat. This one only had five people on it, and it had no glass roof on it, so it seemed considerably less touristy than the covered ones that cram tons of people inside it. The cruise took about an hour and while there was a bit of history, it was mostly a relaxing way to see the canals and quaint buildings that comprise the inner city. The boat ran so quietly, but had some power, and so I inquired what was making it run. Electricity!! They charge the boat during the day and run it at night off the battery. Wonderful. Some of the bridges across the canals are so low, that we had to lay down in the boat to get through them.

A Nighttime Ride Through the Canals Was Irresistible

When I returned to Cocomama, I did a quick email check and saw Dan emailed me from 35,000 feet up in the air. He commented about how great the internet connection was in the plane and it was a lot better than at Eileen’s. He had me laughing here. I drifted off to sleep, thinking that Amsterdam absolutely embodies gezzelig. 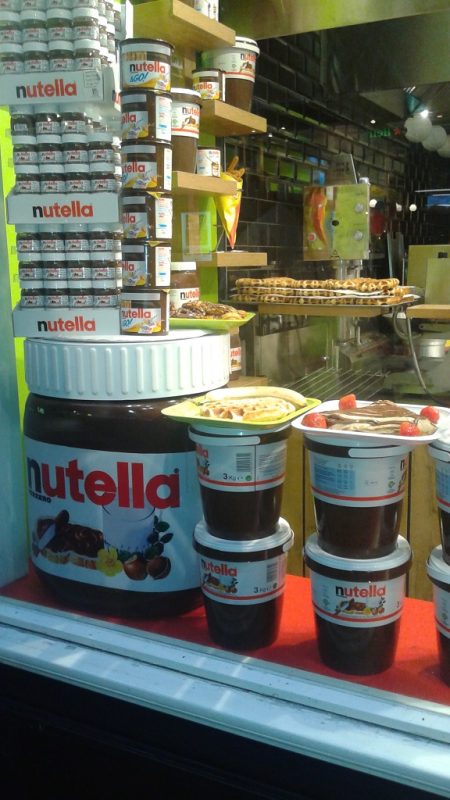 Fromageries in Paris Replaced by Nutella Cafes in Amsterdam