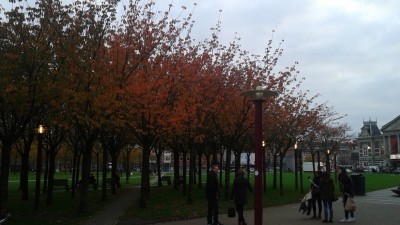 The Autumnal Trees on Fire Outside of the Van Gogh Museum

It’s my last night in Cocomama.  The Gastronomic plus Amsterdam Tour has come to a close.  Bittersweet feelings dwell in my heart.  The hundreds of hours of planning have come to fruition, birthing what currently feels like a lifetime of experiences, and yet, traveling, like eating, is temporal.

I woke up today with the intention of checking off a few of the smaller things I wanted to hit that are not as central to the city, as well as see the Van Gogh Museum.  The De Pip neighborhood is just south of Cocomama and it is known as being ethnically diverse, as well as having the best known market in Amsterdam, Albert Cupmarkt.  It was lively and plentiful. Many of the booths are extensions of the shops – so you can get fabric, toiletries, washing machines, as well as groceries and premade food.  Each day, the shop workers need to set up booths and haul their goods out of the store and then back in the afternoon.  Probably a lot of work, but it leads to a great spirited market to experience.  I got some food at a booth featuring Provencal style items and this made for a good breakfast (yes, I love savory things like anchovy wrapped olives and chevre stuffed peppers for breakfast). 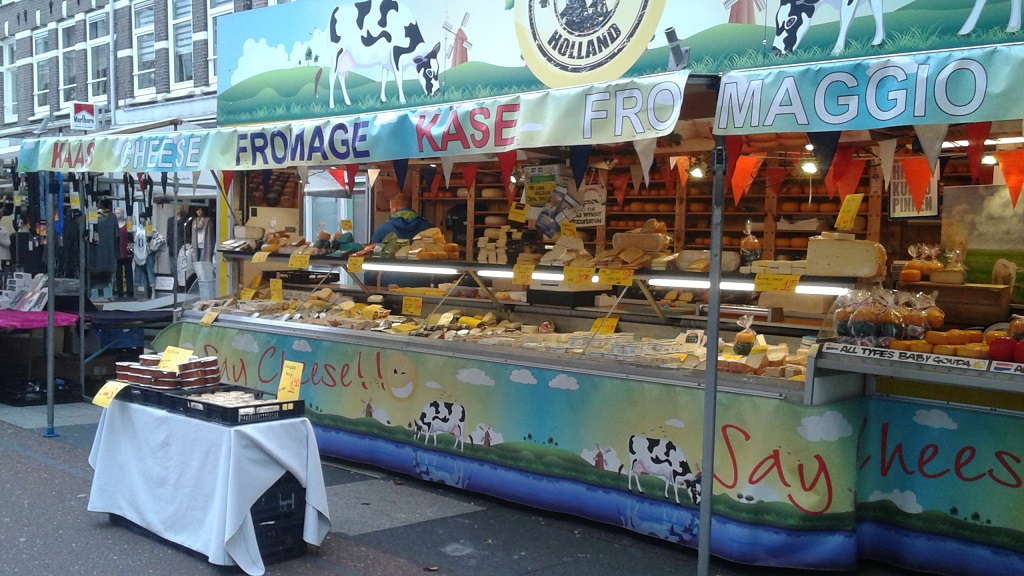 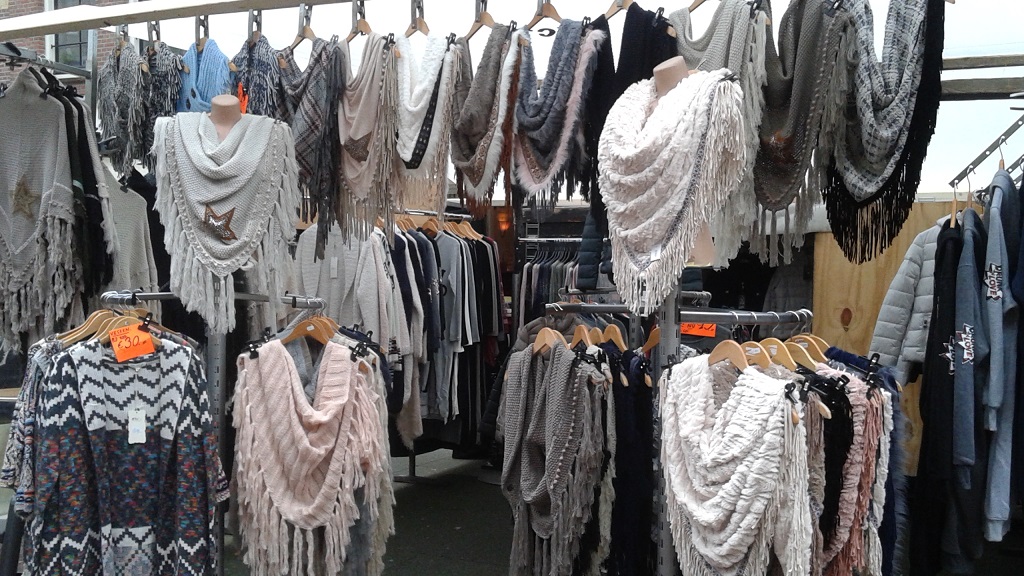 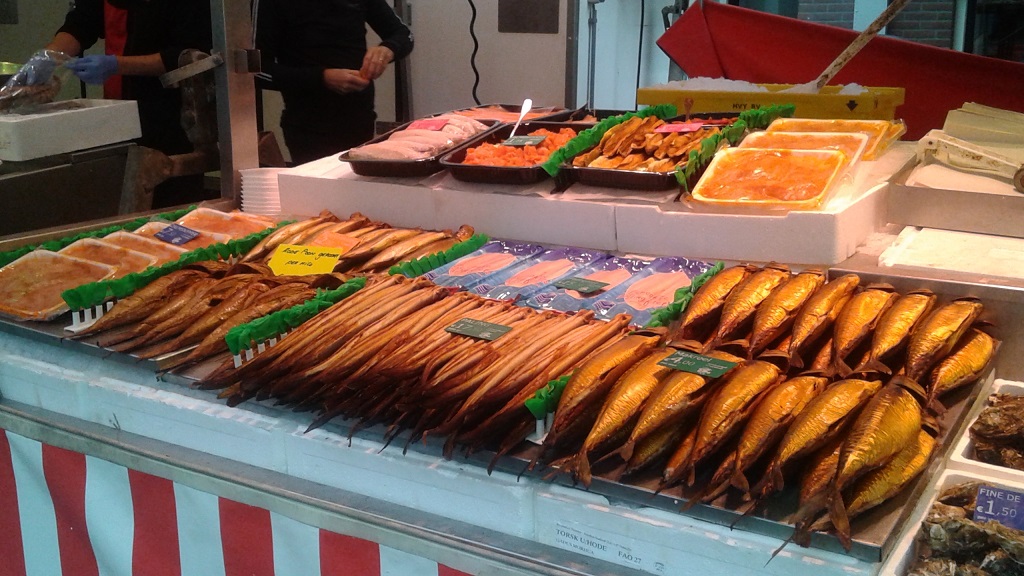 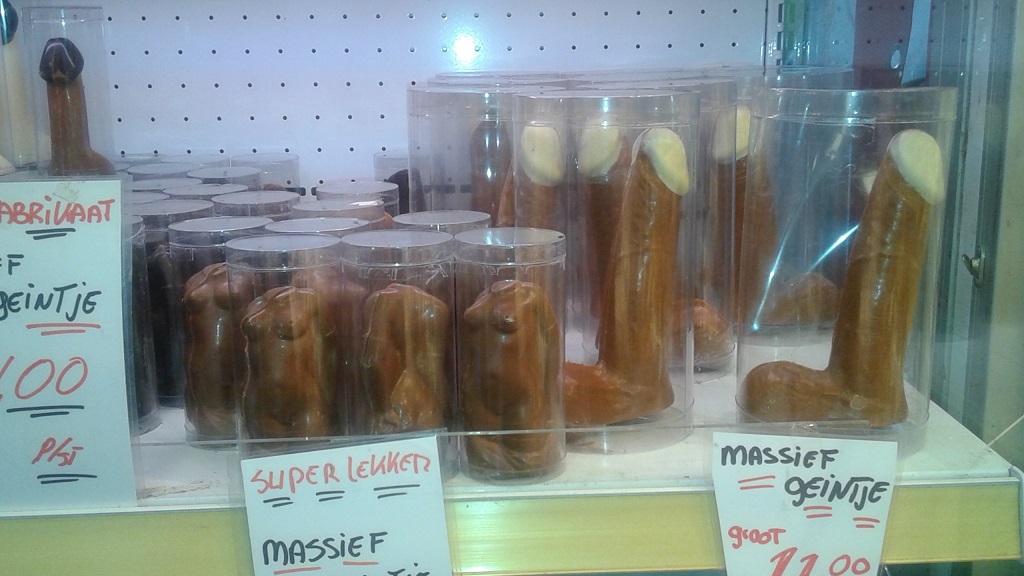 I rode my bike past the Rijkmuseum, which has very striking architecture that looks very similar to Centraal Station.  When I took the canal boat ride, the captain mentioned that the two buildings were from the same period and had the same architect.  I guess I am not as big of an artie, as I am a foodie.  I have somehow managed to skip over the major art museums everywhere I have gone.  It’s not that I am not interested, but they are just so big and events in and of themselves, that I have not wanted to dedicate the time that they deserve.  Anyway, perhaps someday I will trade in the gastronomic tour for the art museum tour. 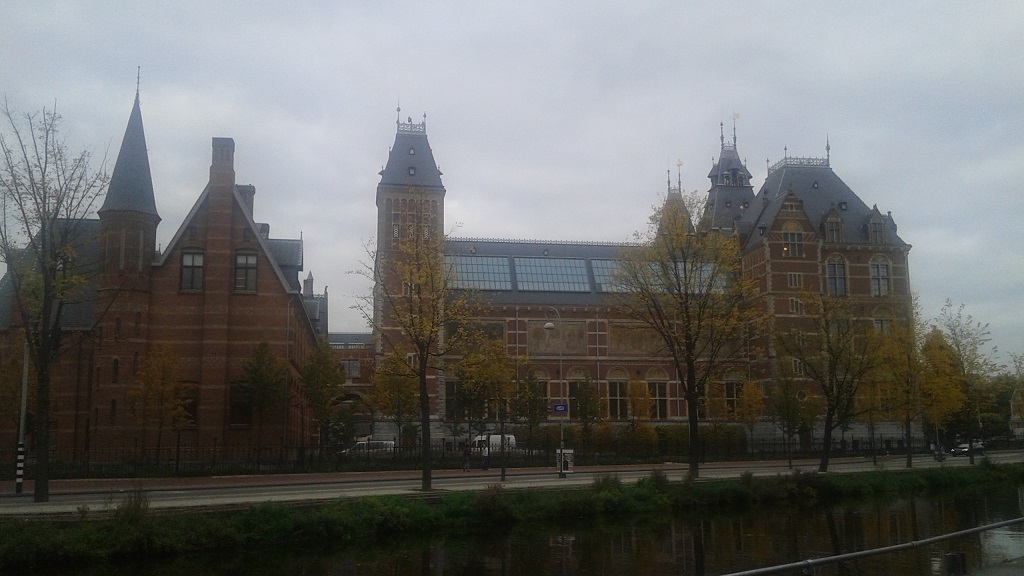 I biked to Oosterpark which is a smaller Vondelpark, and rode my bike around.  Oost (east) Amsterdam, being on the outskirts, is also more culturally diverse than the center of the city.  There are a couple of monuments in the park – one  to commemorate the end of slavery in 1863 and another to honor a film maker who was murdered in 2004 by a religious extremist.  The autumn colors in the English garden were quite striking and I took them in while biking briskly around the trails. 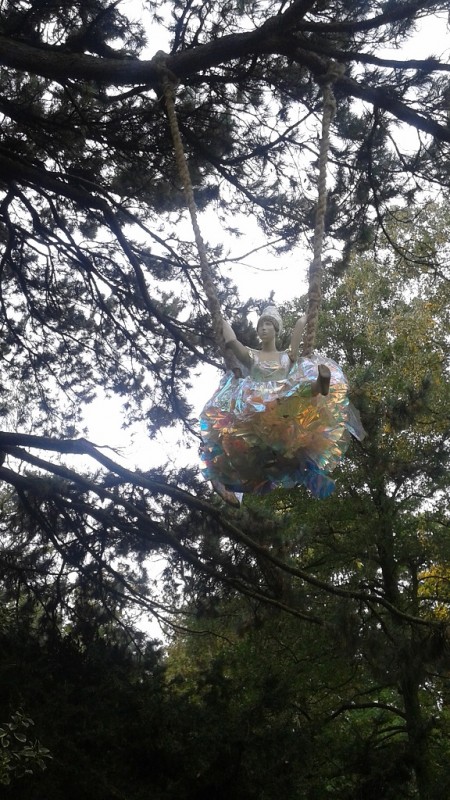 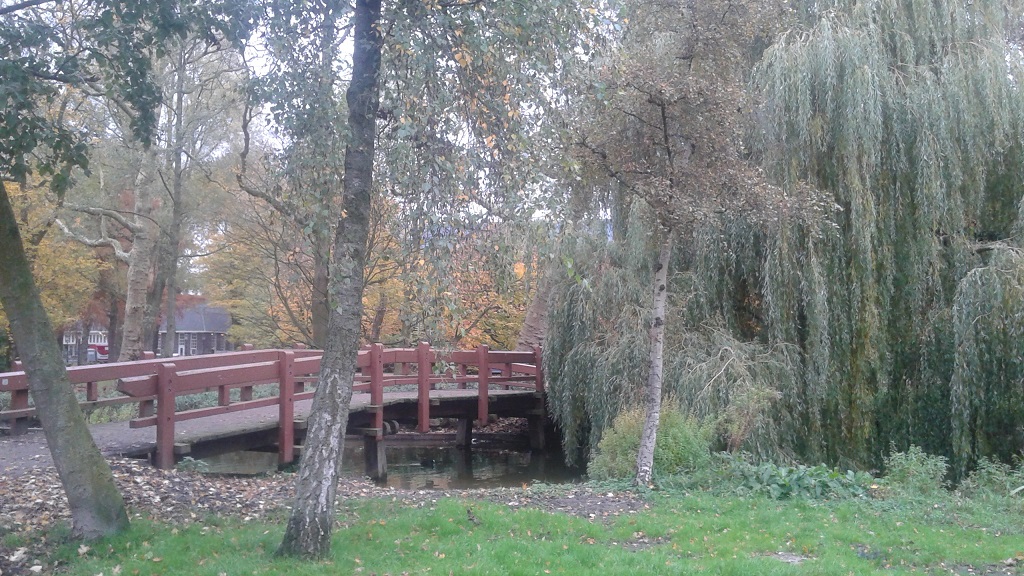 Also in Oost Amsterdam is Frankendael Park, which has Frankendael Huis, a 17th century country estate.  The house is now a café (food looked good, but I wasn’t hungry), with formal gardens in the backyard.  The gardens are modest, yet have some interesting topiary and, behind them, some more free flowing gardens are on display.  When the weather is nice, I would imagine it’s a delight to sit in the formal gardens and have lunch.

The Formal Gardens at Frankendael Park

I continued the bike ride to the east, to De Grooyer’s – one of five remaining original windmills in this part of the city, although it got moved to this specific location in 1814.  In 1985, it got converted to a microbrewery.  I thought it would be awesome to drink a local beer underneath an old windmill and I was going to do just that, but it was about noon and it didn’t open until 2pm.  I looked inside, confirmed it was a cozy and charming place and continued riding along. 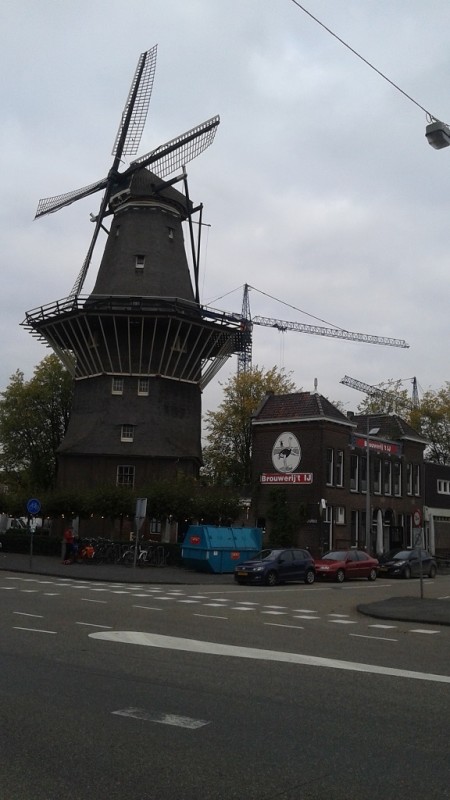 I had read about Ron’s Gastrobar run by a Michelin starred chef, who traded in his stars for a less formal, tapas based dining experience but with with the same creative flavor combinations as in haute cuisine.  The scallop tartare with potato and Beemster cheese foam sprinkled with powdered hibiscus for dramatic effect – to die for (or to live for!).  Even by French standards!  I thoroughly enjoyed the meal and let the staff know this was the best restaurant I encountered in the city.  They were very pleased. 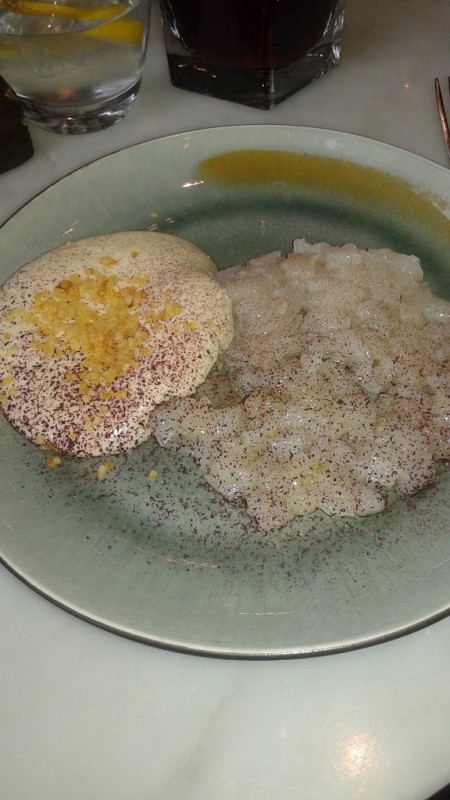 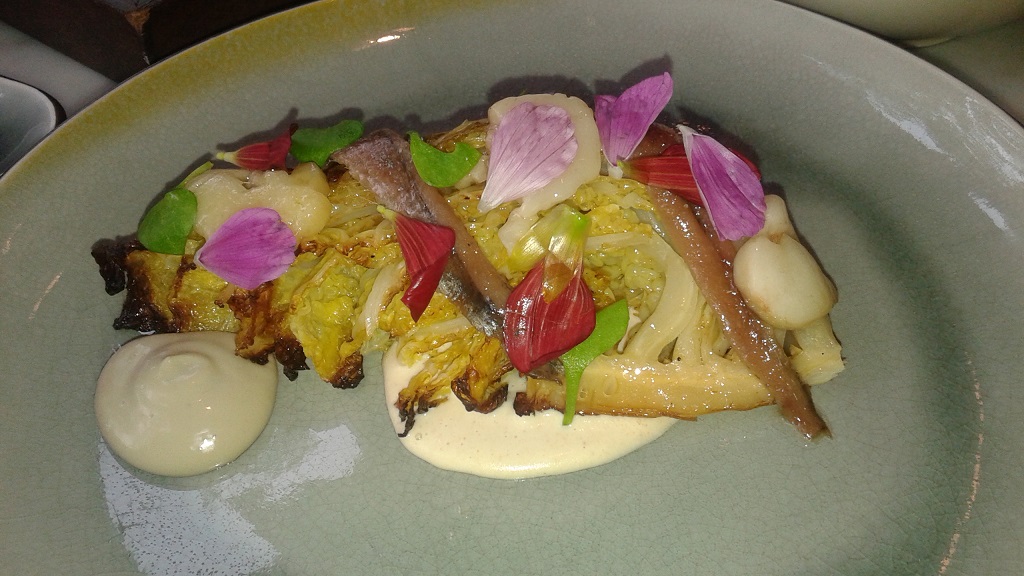 The restaurant was close to Vondelpark and since I wanted an excuse to go back there during the day, I rode all around the park afterwards.  It was full of activity from all walks of Amsterdam life.  I can only imagine on a warm day, the lawns would fill up with those having picnics and the like.  For sure, the best urban respite that the city has.

Biking home I tried to resist (since my suitcases were getting rather full) but I found myself involuntarily entering Europe’s largest bookstore dedicated to travel.  I could have gotten lost there, for hours, if not days or weeks.  Yet I stayed focused and picked up books on a couple targeted areas, places I hope to travel to in the next year or so (I am not going to give it away, but stay tuned, for future blogs!).

Today was the most biking I had done in the city and I was really getting in the swing of the bike culture here.  Now there are traffic lights for bikes and, when they are red, it is not because the cars have the right away, it is because there are streams of bikes coming the other direction.  At points, I am holding my phone for Google Map navigation and riding with one hand.  But you have to be careful, one doesn’t have much room for error in the bike lanes – they will bowl you over if you aren’t paying close enough attention.  On the other hand, the cars seem to stop, to watch for bikes.  My tendency is to stop for a car and let them go, but when I do that, the car driver just looks at me funny and signals me to keep moving.  In Amsterdam, the bikes really do rule the roost or at least the streets. 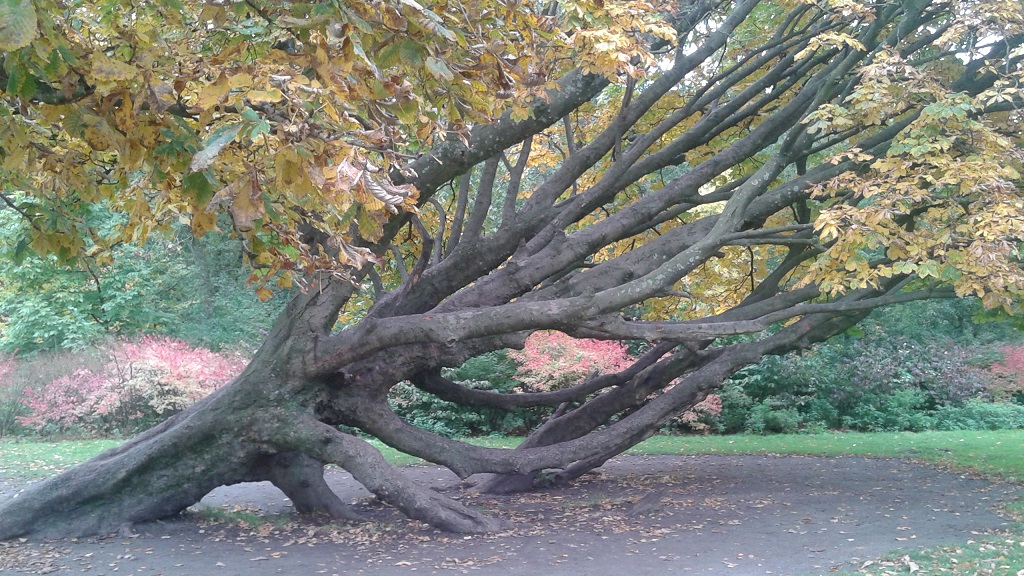 It Is Both Suffering and Beautiful at the Same Time

I kicked back at the hotel for a bit before biking back to the Van Gogh Museum.  It usually closes at 5pm, but on Fridays it stays open until 10pm.  There is quite the bustle of activity at Museum Square with street musicians and bike commuters whizzing by.  I was hoping I’d avoid a long line by going later and it worked.  I arrived and five minutes later, I was in.  I spent a couple hours there and it was pretty incredible.  The amount and variety of art Van Gogh produced in only ten years.  The museum was well laid out with themes and the audio guide was very helpful in explaining the history of certain paintings as well as interpretations of them.

He wrote over 800 letters to his brothers and other people and so this became a record of the way he thought and lived his life.  The museum incorporated many of his quotes and this gave the museum goer a further understanding of the passion with which he led his life.  There were many of his earlier sketches, as he first learned to draw, thinking this would be the foundation of his paintings, which indeed it was.  He also went through a phase of painting Japanese art.

Contrary to common belief, he wasn’t naturally brilliant at painting and his mental instability didn’t feed his art.  He studied art formally to learn the foundation of drawing and painting and he continued to tirelessly study other artists and improve his technique, his whole time living in Paris.  He painted most prolifically when he was at his healthiest.  When he was very sick, it not only impeded his ability to paint, it sometimes completely brought it to a halt. 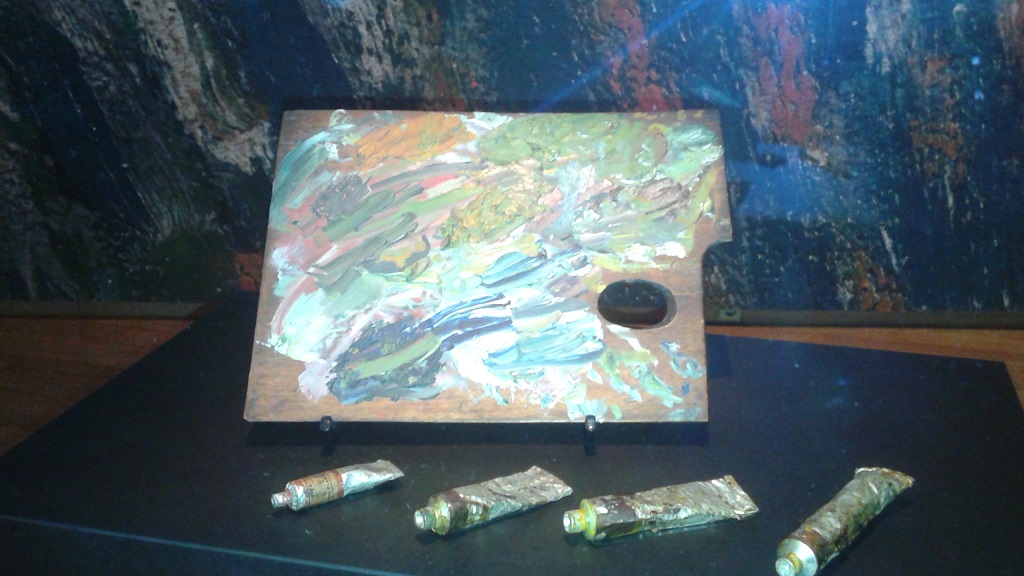 Six months after Van Gogh died, his brother and the most devoted supporter of his work died.  His sister-in-law then worked very hard at getting him the recognition he deserved.  When she died, his nephew, (named Vincent, in his uncle’s honor) was put in charge of his paintings.  As an aside, Van Gogh’s first painting in Arles was for his newborn nephew.  His nephew worked hard on his behalf and started this museum.  It’s a must do – it’s totally awesome!!

I went to a couple bars to close out the evening and my trip.  The people are very friendly people and the atmosphere is very cozy and there are lots of microbrews to try.  I can truly see the appeal of Amsterdam to many.  Since the foodie renaissance has yet to hit Amsterdam and they must not have gotten the notice about the ill effects of tobacco smoking, because everywhere smells like an ashtray (including me and all my clothes), I will admit it’s not my favorite city.  It has its charm and I am lucky to have had the opportunity to visit it, but there are a lot of other places I would visit, before making another visit here. 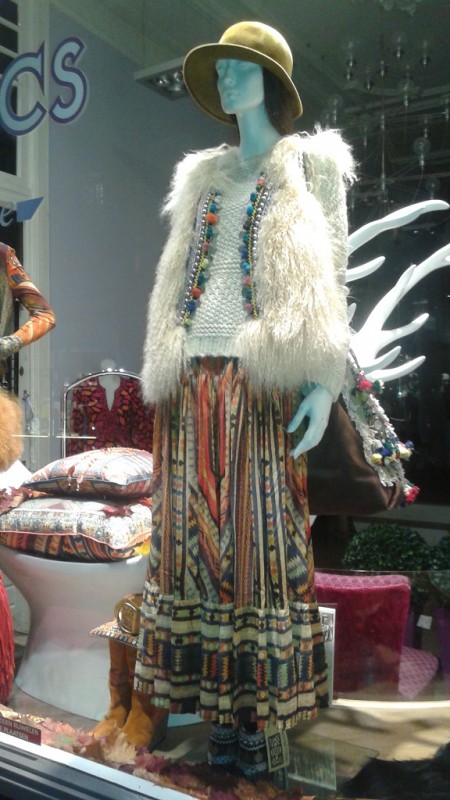