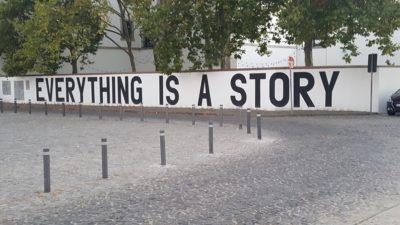 This Bit of Wisdom Could Be Anywhere, but It Is in Évora

Oct. 15:  We are loving our pousada and the features that make it unique.  We especially like that we now sleep where the nuns used to.  Our day began when we went to breakfast in the most gorgeous breakfast nook either of us have been in to date.  The tall arched ceilings in the medieval cloister with their mustard yellow ribs were like rays of sunshine.  Eighteen century azulejos decorated the walls.  Even the room where the breakfast foods were presented, had an intricately carved stone archway.  And we suspect it was originally a chapel in the convent. 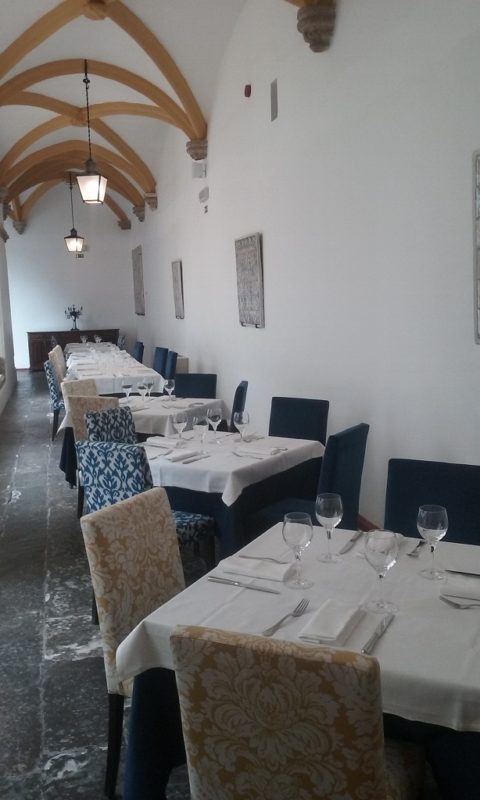 The Restaurant Was in the Former Cloister 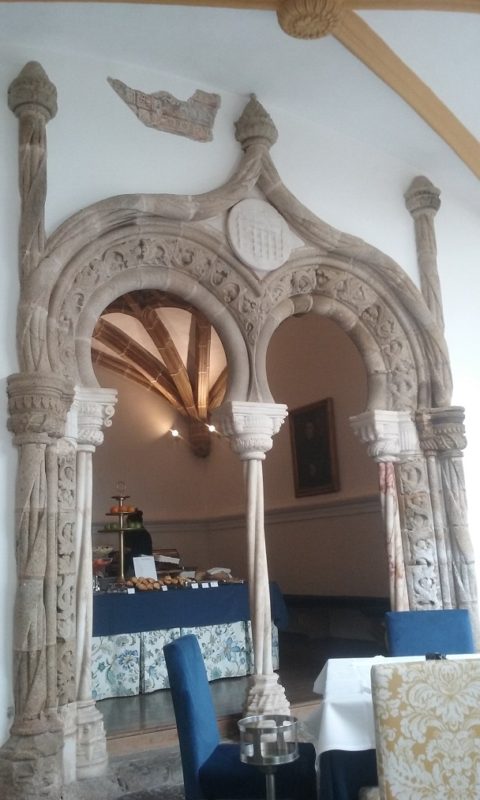 The Breakfast “Nook” Was Breathtaking

The pousada was on top of the hill and surrounding it was a handful of noteworthy sights.  An excellent starting point for exploring Évora.  The Roman Temple that may have been dedicated to Diana is one of the most well preserved of its kind in Europe.  You can stand close to it, but essentially it is blocked off so it can’t be touched, presumably to continue the presentation.  I am not sure how this came to be, but for some period of time, it became a slaughter house.  As funny as this sounds, the fact that this was the case, helped to preserve it, because if it were not in use, people would take the stones to build other things.  Similar to the way that the Muslims built their buildings from remains of the earlier culture Roman culture and the Christians used stone from the Muslim buildings in their buildings and so on. 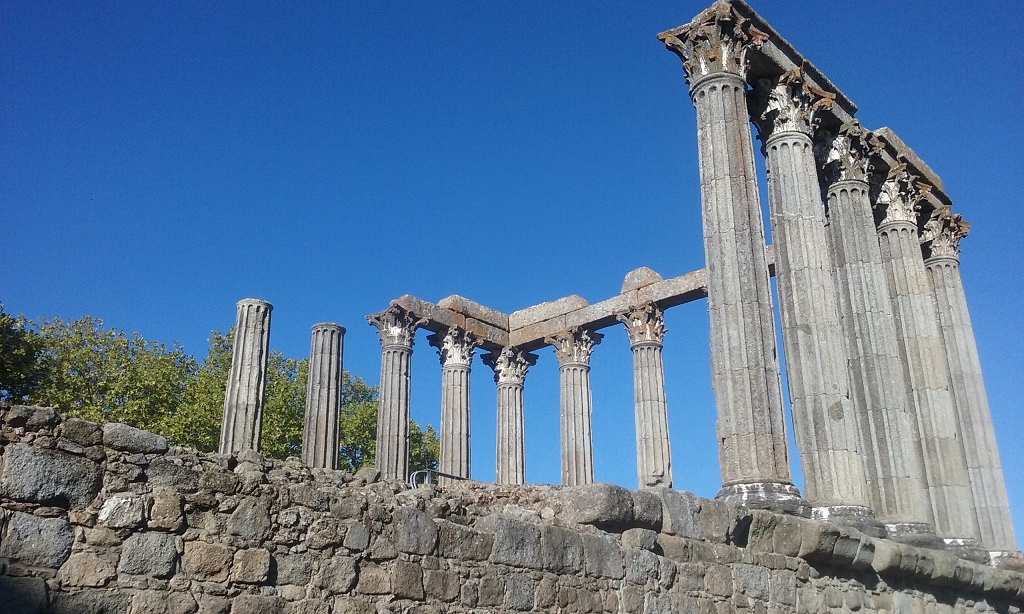 The public library, which is right next door to the pousada, featured a photography exhibit that was very moving.  It was all in Portuguese, so we needed to put it in context to figure out what the artist was wanting to convey.  The little part that I could translate, confirmed that all of the people were Alentejan.  The black and white photos had a very dramatic effect.  They all captured the life struggles of the people.  The older people revealed theirs in their deeply wrinkled faces long lives of hard work.  The younger peoples showed theirs by merely getting through their daily lives.

Can’t You Just Feel Their Struggles? 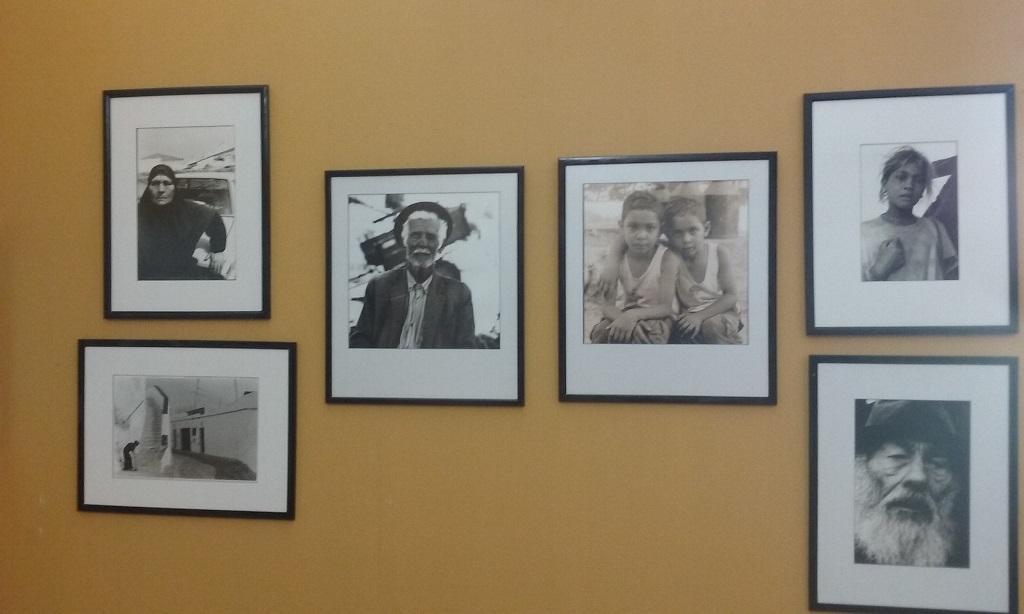 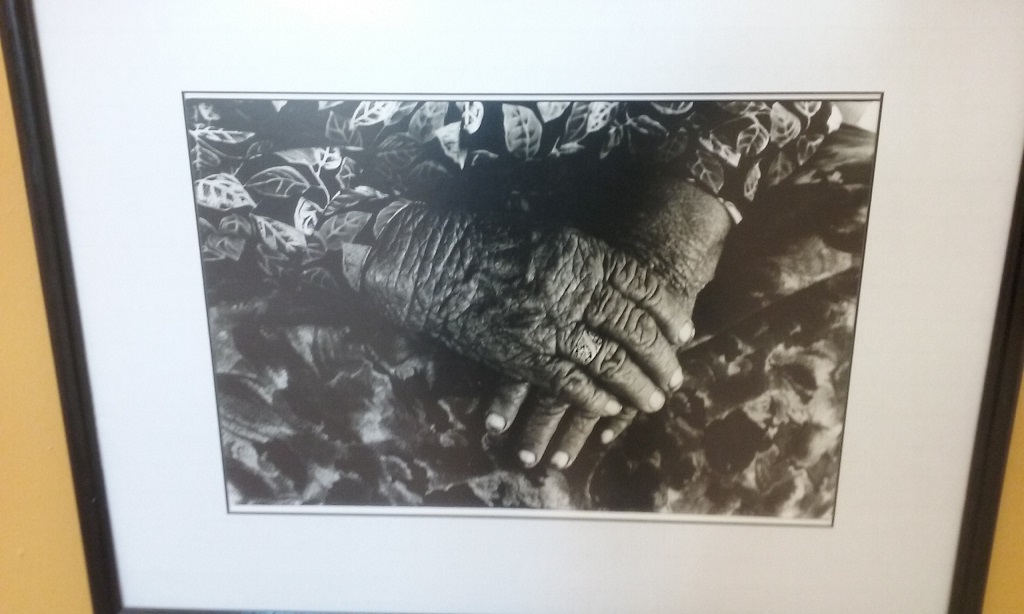 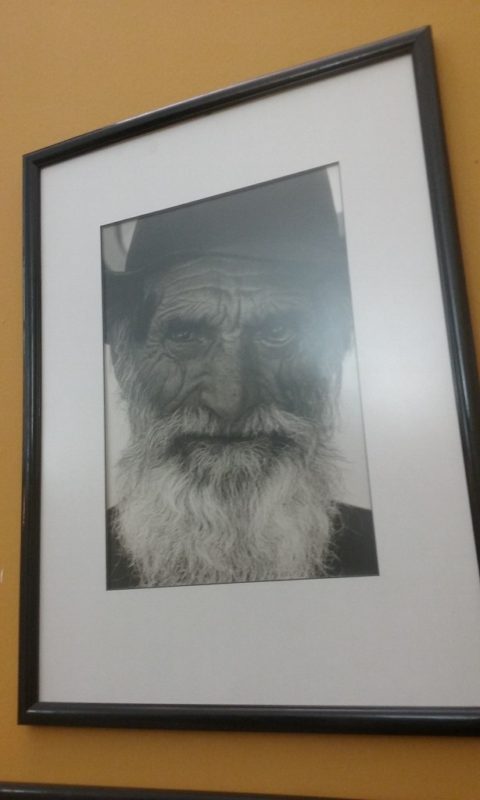 At the very top of Évora is the Sé, which translates to the cathedral.  Standing atop the tower afforded us a 360 degree view of the Alentejan countryside.  It’s mostly flat with a few rolling hills.  Olive trees, cork oak and grape vines dominate the landscape and looking north, we saw Arraiolos marked by the castle that we were in yesterday.  We had a very sweet moment while intentionally walking the cloister, when we were graced by the chimes of the late morning church bells. 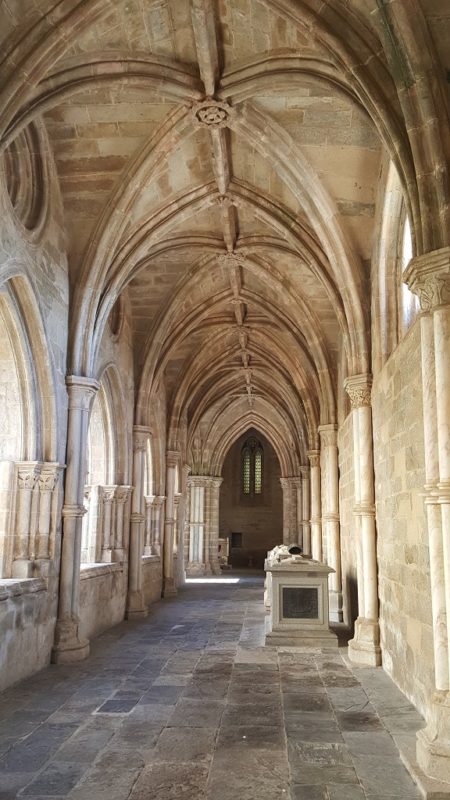 The Cloisters at the Sé

We felt lucky to secure a lunch reservation with Dias, at Quarta Feira (the Portuguese word for Wednesday).  He said that were only a few spots left and when we showed up, we saw that was true. After freshening up at the pousada we were off to dine at this very unassuming restaurant that was hidden in the maze of the medieval old town.  We were the only non-Portuguese people there.  Dan and I individually, and together, always relish such experiences, knowing we have tapped into a real slice of another culture.

We got the customary sumptuous Portuguese couvert and were expecting to get menus.  But we never did and, as I watched the other tables, I observed he just kept bringing them more and more food.  And eventually all these hearty and rustic plates were delivered to our table.  I am barely joking when I say there was enough food to feed an army.  He also gave each table a full bottle of wine to use at their discretion throughout the meal.  For myself, I can’t really partake on this level, but we saw other tables polishing theirs off as if it were water.

As the finishing touch of the meal, he poured some wine into a small glass.  I asked him if it was port.  He looked at me, somewhat in horror and said “this isn’t port, this is Alentejan vinha”.  It’s like asking in the Loire Valley in France “is this champagne” and he answers in horror “this isn’t champagne, this is Loire Valley sparkling wine.”  We sipped at it, while sampling a touch of the abundant dessert he brought.  Although we wanted to pass out in a food coma (carb overload), we forced ourselves to walk.

Dan had read about a Portuguese culinary custom and we saw it play out today.  It seems that it’s considered polite to leave some food on your plate.  It may explain the gargantum portions.  Anyway, it’s considered a compliment to the chef.  Just to put the finishing touch on the scene, picture Dias being the Portuguese version of your Uncle Mario in an Italian village. 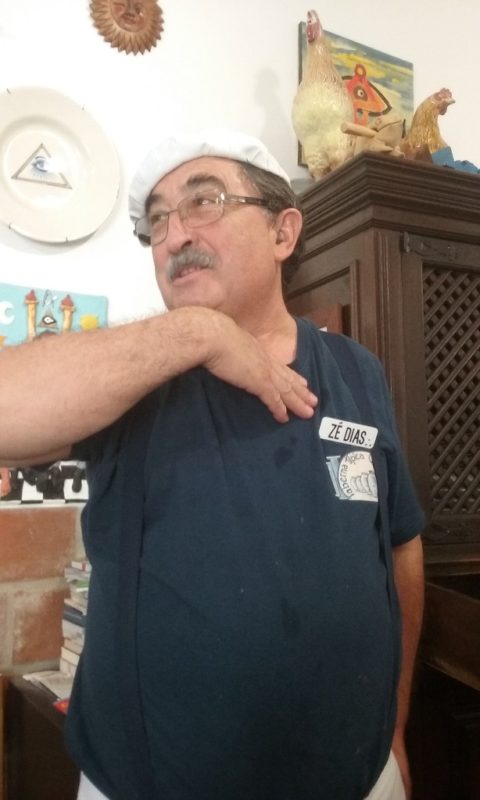 Igreja de São Francisco was a must do for us.  The church was built in the 1500’s in Gothic Manueline style, which was appealing.  But what really drew us there was the ossuary next door, called Capela dos Ossos.  It’s composed of bones of 5000 people, most of which were monks.  It was built primarily to free up space in nearby cemeteries, similar to the catacombs in Paris.  Another purpose was to prod other monks into contemplation and transmit the message of life’s being transitory.

Compared to the catacombs, this ossuary was just a chapel with all the religious trimmings.  It had a very expansive feeling, unlike the narrow tunnels of the catacombs.  Just for perspective, the catacombs had six million people and this has five thousand people.  Also the placement of the bones here were clearly more of an artistic design.  The columns and gothic arches were elaborately designed, along with patterns on the walls. 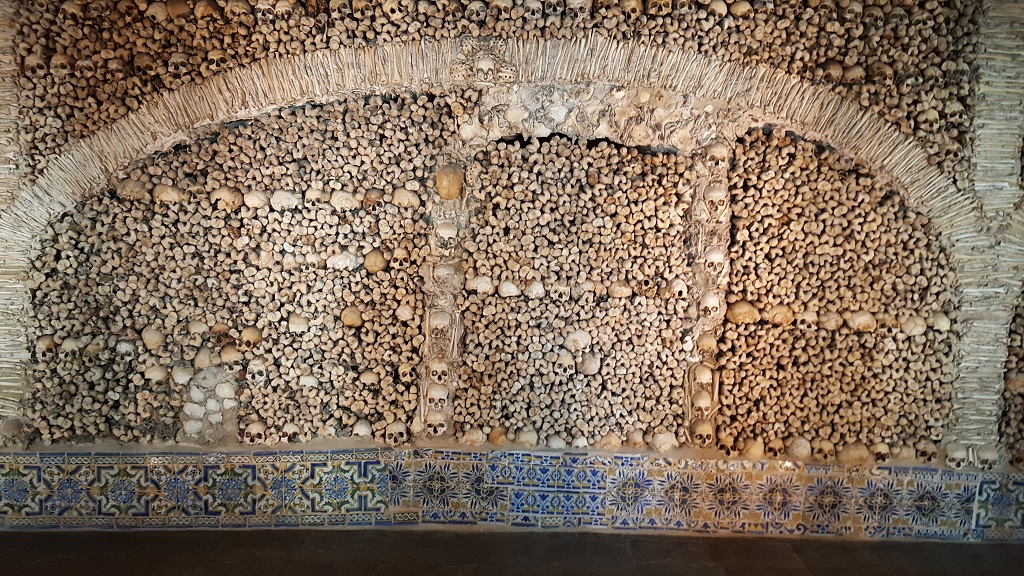 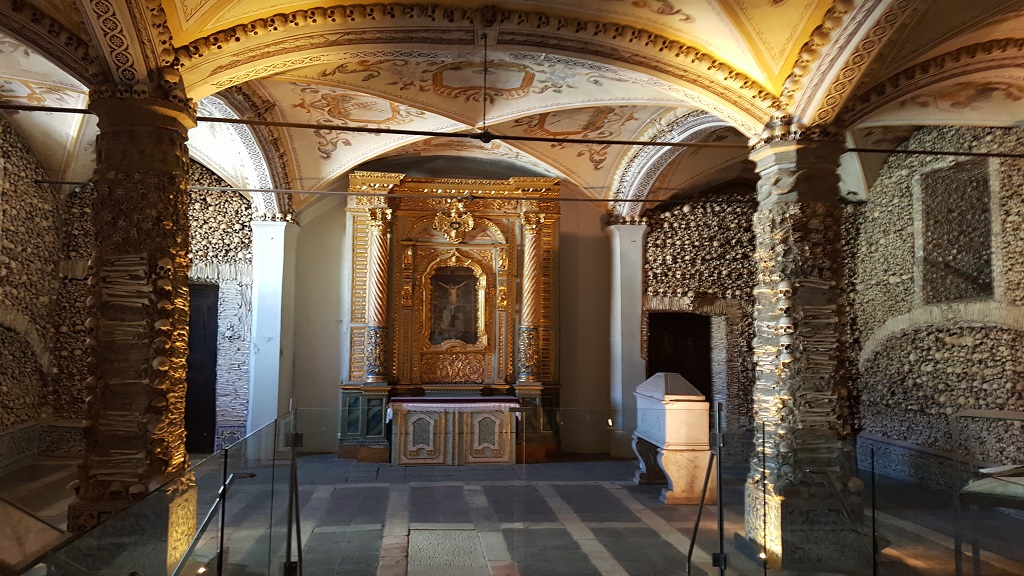 Out on the main plaza, Praça do Giraldo, we observed all the people sitting around and drinking coffee.  This is how the plaza is used in modern times, which seems like a logical use.  Historically, it has run the gamut of other uses.  In 1483, it was used to execute Fernando II Duke of Braganca.  During the 1500’s it was used for the public burning of the victims of the Inquisition.  And as recently as the 1970’s, it hosted fiery debates on agrarian reform. 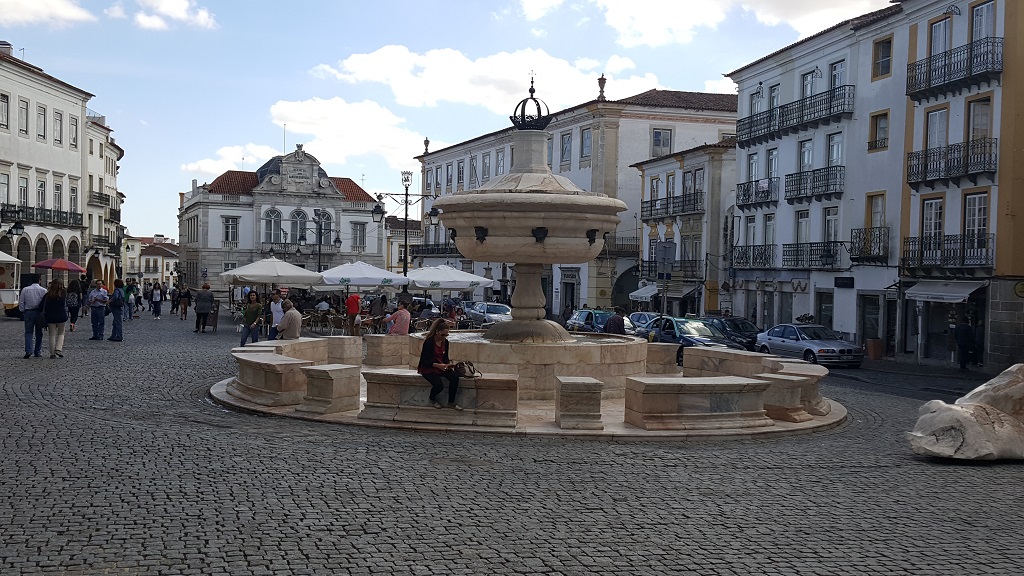 Praça do Giraldo Has Seen Many Things Through the Years

The Rua 5 de Outubro is a street that connects the Sé with the main plaza and it is prime shopping for local products.  The date, October 5th, signifies the day the Portuguese Republic was established in 1910.

Although I saw lots of cork items in Lisbon, I preferred to get mine closer to the source.  The uphill street featured many shops and they each had their variations of a million and one things to do with cork.  Hot plates, aprons, backpacks, change purses, hats, and almost any household item that you can imagine.  And then when you add in some of it was dyed and had patterns, the options were limitless.  I went back and forth between a couple final contestants, and, in the end, I found myself a dyed brown hat that could look very stylish with a lot of types of clothing.  I hadn’t even known cork could be so versatile.  They way that they make it so thin and pliable – it’s truly incredible. 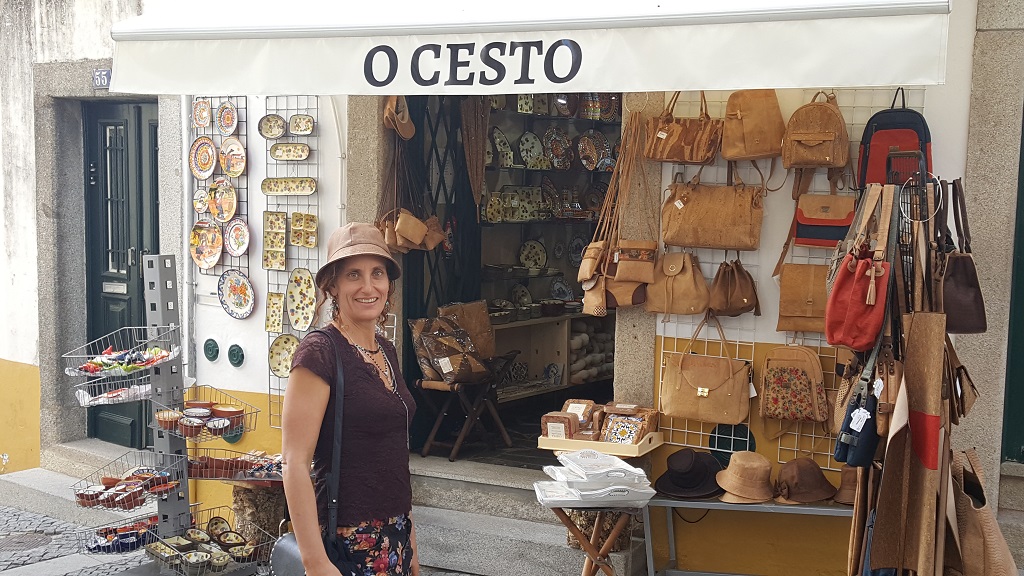 I Had No Idea Cork Was So Versatile, I Am Impressed

Even though quite a while had passed since lunch, we still were working on working off the carbs.  We purposely returned to the aqueduct that we happened upon last night, knowing a daytime visit would be fun, to marvel, and take some pictures.  The Áqueduto da Agua da Prata (of silver water) is a total of nine kilometes long, starting in the surrounding hills and ending up on a street inside the walled city.  It was built in the 1500’s and replaced a Roman aqueduct.  At the very end, it is only about five feet tall, but it quickly gains height.  There are homes that are built inside the contours of the arches.  And in one spot, it’s an overpass for cars to drive under.  It essentially has blended into the urban landscape through the years. 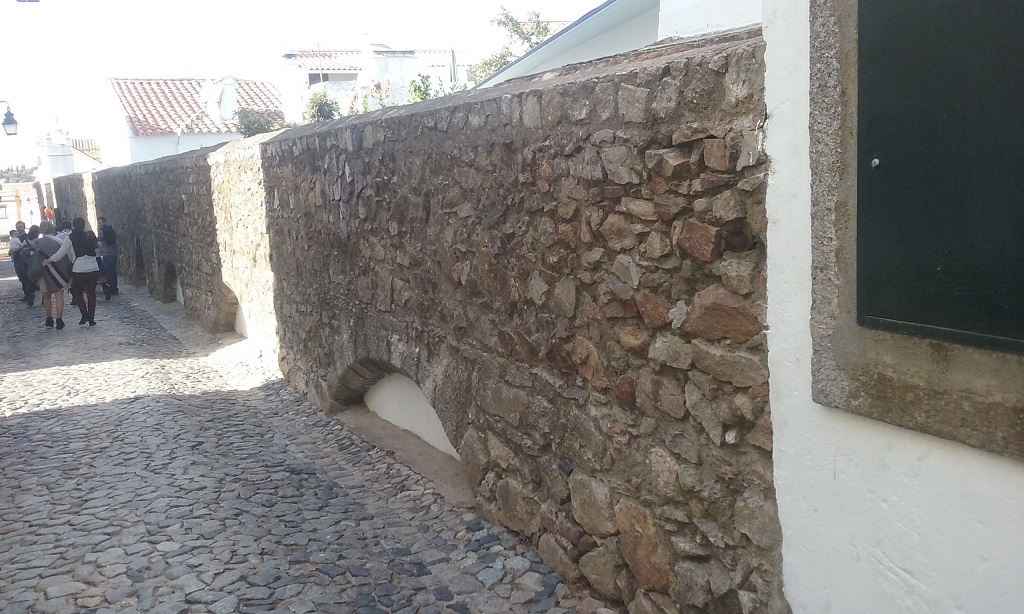 The End of the Aqueduct 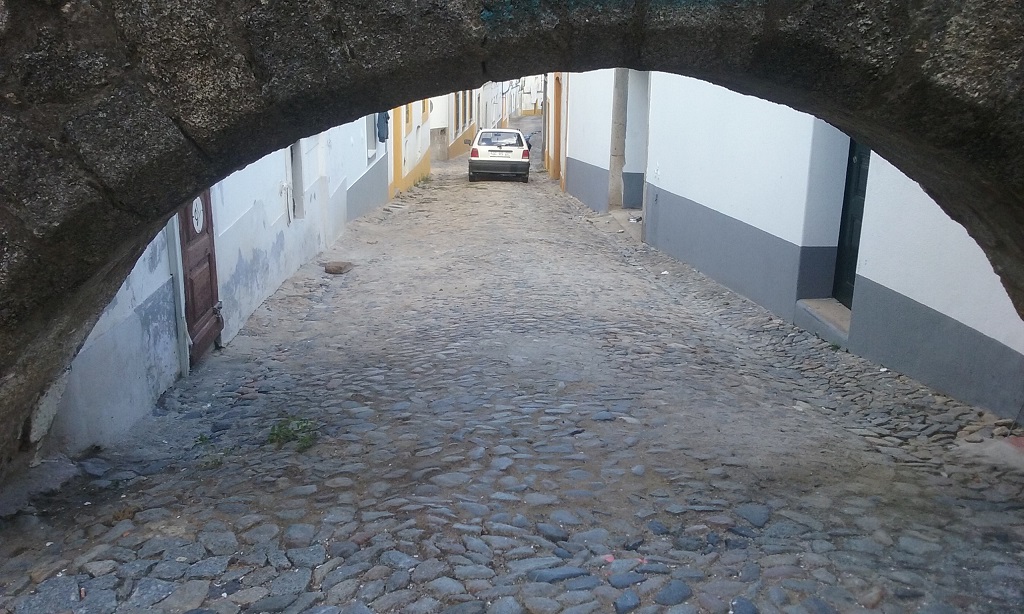 Now Tall Enough for a Car to Fit Under 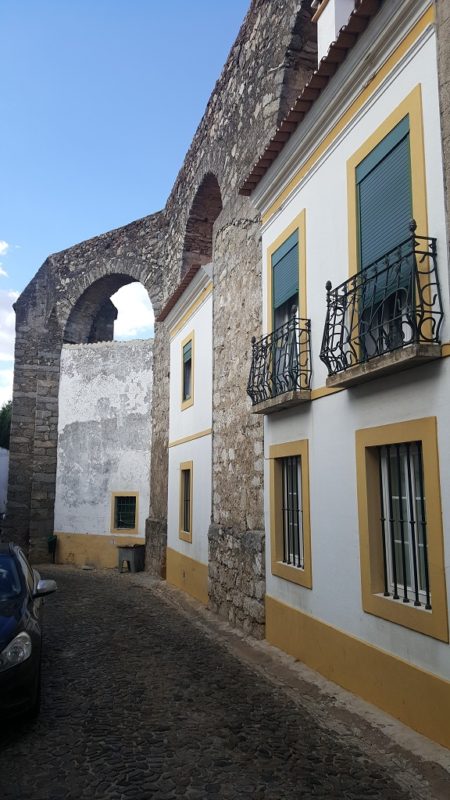 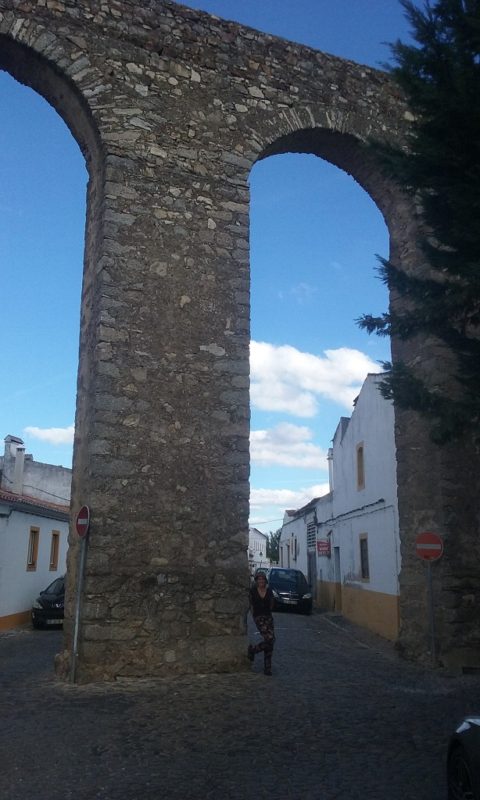 And from Here It Travels to the Hills

Walking back home, we got inspired in the spur of the moment when we saw horses pulling carriages.  We assumed we’d repeat seeing some of the places we have gotten to on foot, but that it would be a lot of fun nonetheless.   The carriage driver spoke Portuguese and French, and not English.  So Dan carried on the communications with him in French.  I thought it was cool that they were each speaking their second language, in a different country altogether.

We actually ended up seeing some new sights and picked up new tidbits of information about Évora from the driver.  For example, there are 24 churches, just in the old town!  And lots more outside.  The horses were very sweet and well behaved and we lingered while they were watered. 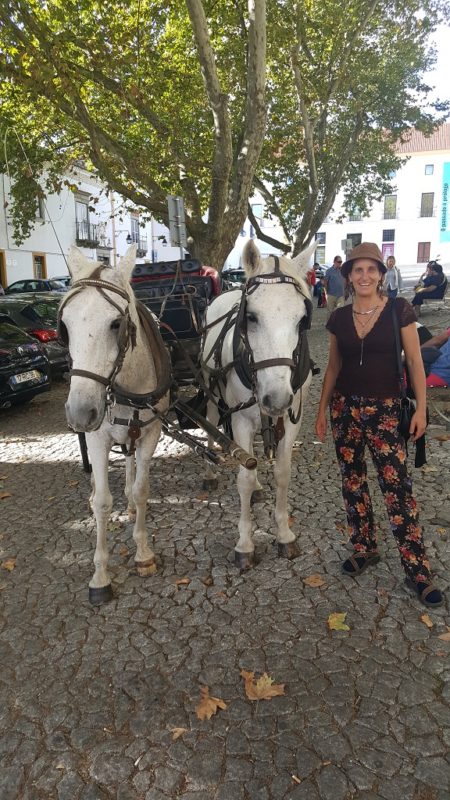 Carriage Rides Are a Sweet Way to Experience a Town

We relaxed a bit at the pousada before we went to dinner at their restaurant.  Eight pousadas in the region were offering a gastronomic event the second half of the month.  They called it a hunting fortnight, and it featured dishes made from regional game.  We had some light soups and some savory rabbit pastry.  After a full day exploring Évora a simple dinner totally hit the spot.

A Smattering of Évora Pictures 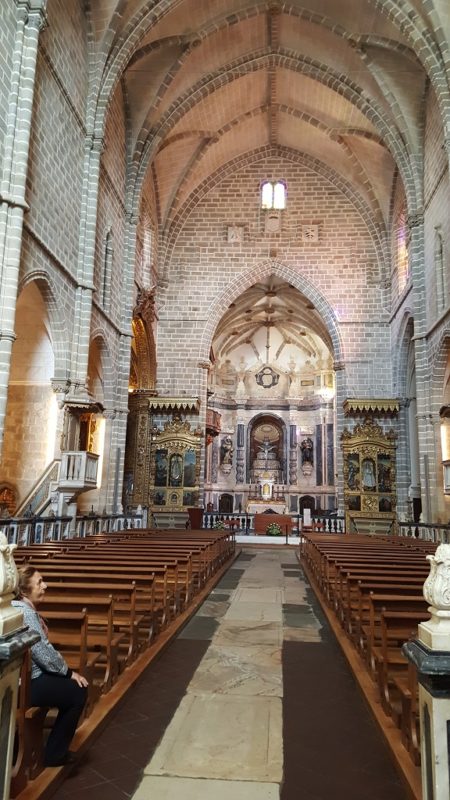 Igreja da São Francisco Was Uniquely Simple on the Inside 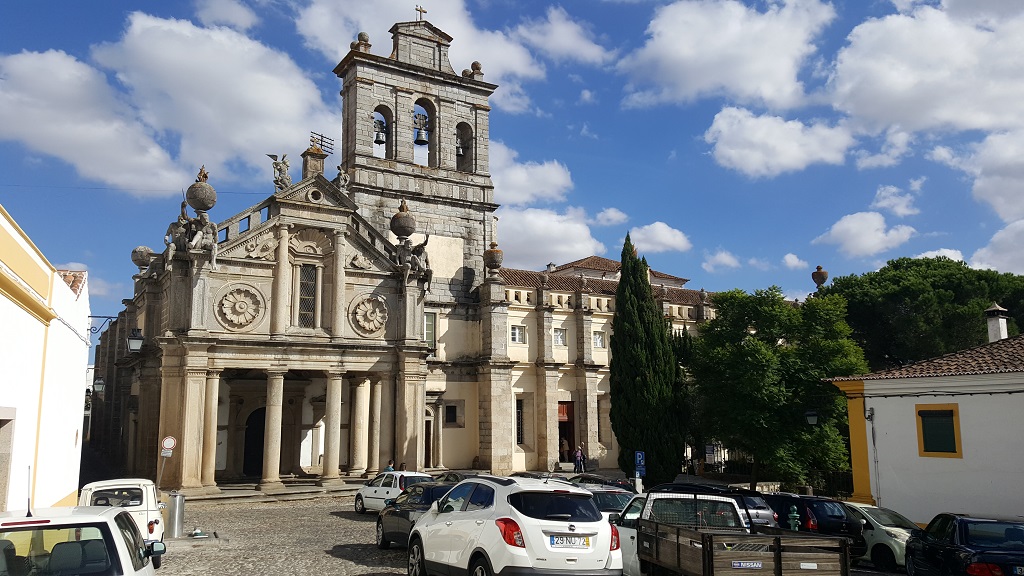 And the Nearby Igreja da Nussa Senhora da Graça 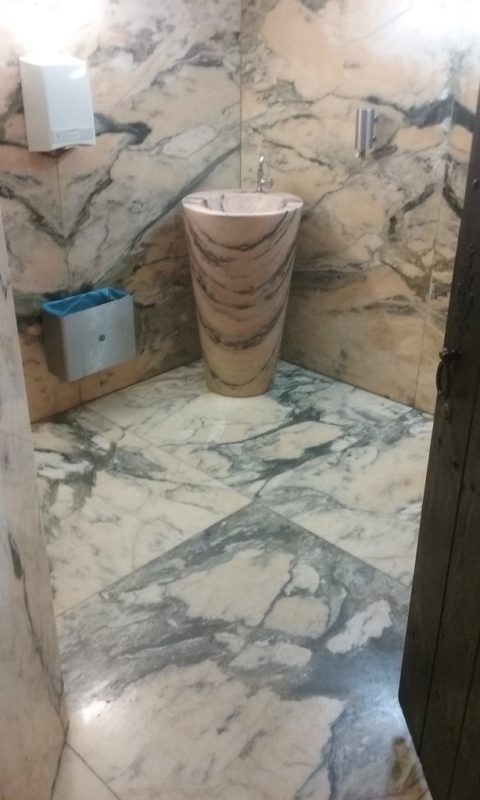 Luxurious Marble Is Liberally Used in the Region