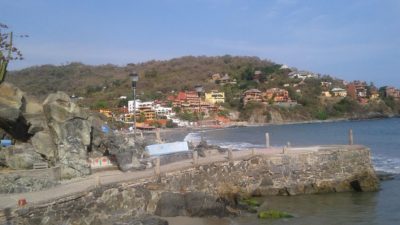 The Malecon With Playa La Ropa in the Background

The appeal of Zihuatanejo is undoubtedly the beaches.  Of course, the geography gives rise to the food and shapes the people and the culture, so it’s hard to separate them all (the way I am attempting to do when writing about my trip).  But still, at the end of the day, the locals and the tourists flock to the beaches.  There are five of them in Zihuatanejo and many more when you head north to Ixtapa and south to the villages.

Starting on the north end is Playa de Municipal and next to it, closest to downtown, is Playa del Puerto.  And following the bay south is Playa Madera, Playa la Ropa, and Playa Las Gatas. 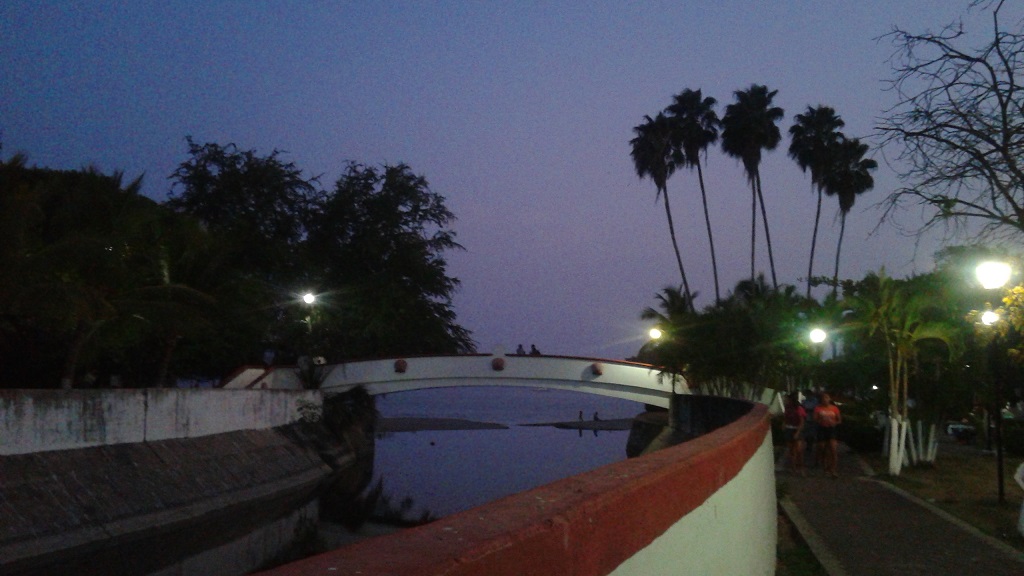 The first two are right along the malecón  and are close to the action of the boats.  Zihuatanejo was a quiet fishing village before the airport arrived in the 80’s.  It in no way has given up its identity, but the town has adapted to the increase in tourism.  The boats are a result of fisherman doing what they do best (fishing!), as well as small charter boats that bring people across the bay to Playa Las Gatas, and also boats used for recreation in the bay – such as parasailing and pulling around huge red plastic tubes that hold a dozen people.

The most visited beach is about a 25 minute walk from downtown.  It’s called Playa la Ropa, which means the Clothing Beach.  Hundreds of years ago, a boat carrying textiles spilt its wares and silks galore washed up on the beach.  The name stuck.  The beach is lined with more upscale, but still very tasteful hotels.  I could see how one may just want to stay right on this beach, although they would do so at the expense of not being close to the town, which is where the local action is.

Playa la Ropa is about a mile long and it attracts a variety of people.  Tourists and locals alike love it.  It has the best sunset view of the five beaches, as it faces west (although the land wraps around the bay, so you never see the sun interface directly with the horizon).  Boats are not parked on it like on the beaches closer to town.  There is probably a good 50 feet of beach, which is plenty of room to escape the waves.  While one can’t really find total privacy on Playa la Ropa, there are a smattering of groves of coconut trees that avoided development with hotels and their accompanying restaurants and they make for nice spaces to set up camp for the day.  All of the beaches are protected by the bay, which makes swimming much more feasible than in the ocean.  There was enough of a current to need to swim with awareness, but I never felt in danger of being swept away by a strong undertow.  Paddle boards and kayaks were being rented underneath some pop up tents along the shore. 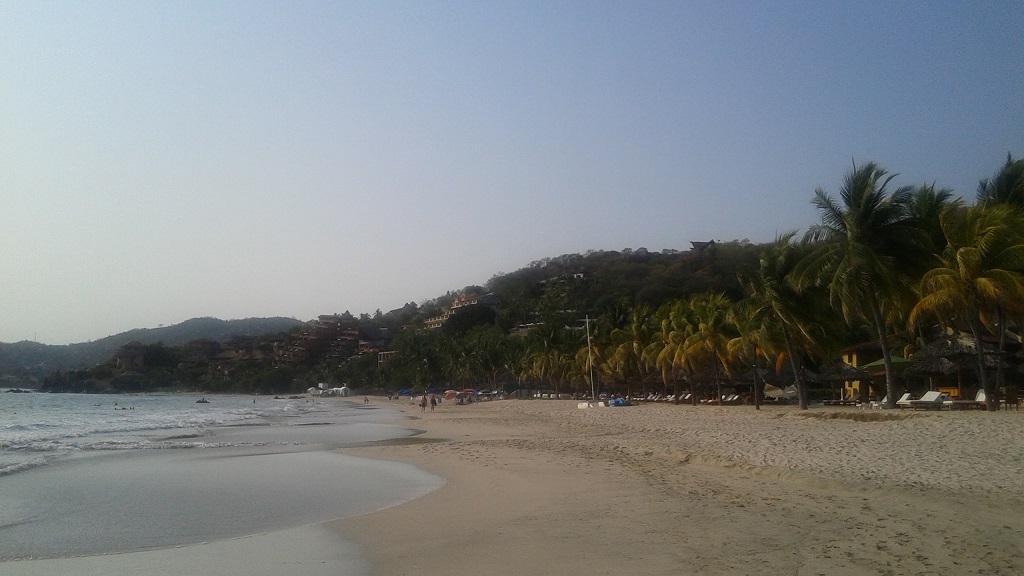 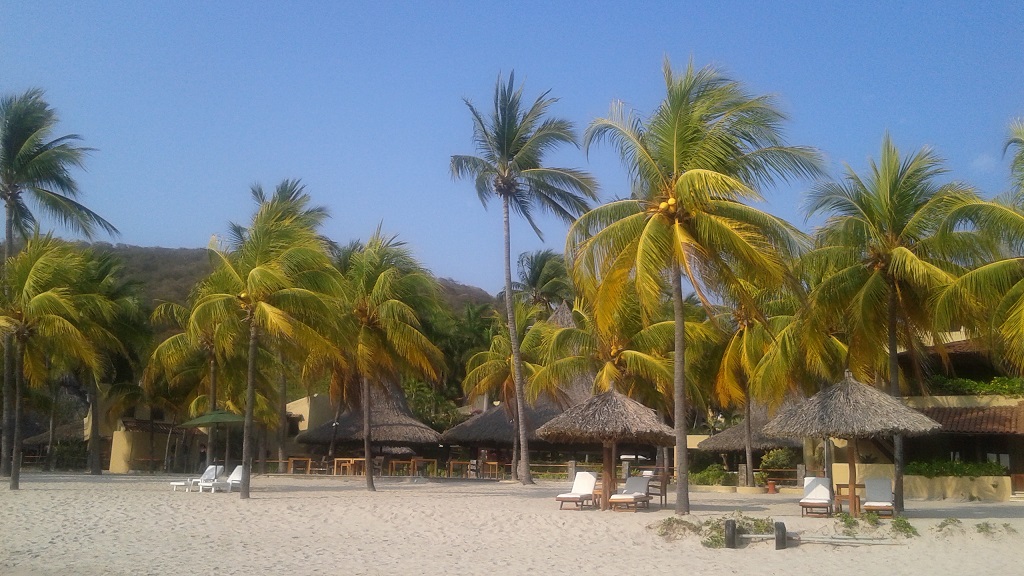 The Development Is Tasteful on the Beaches 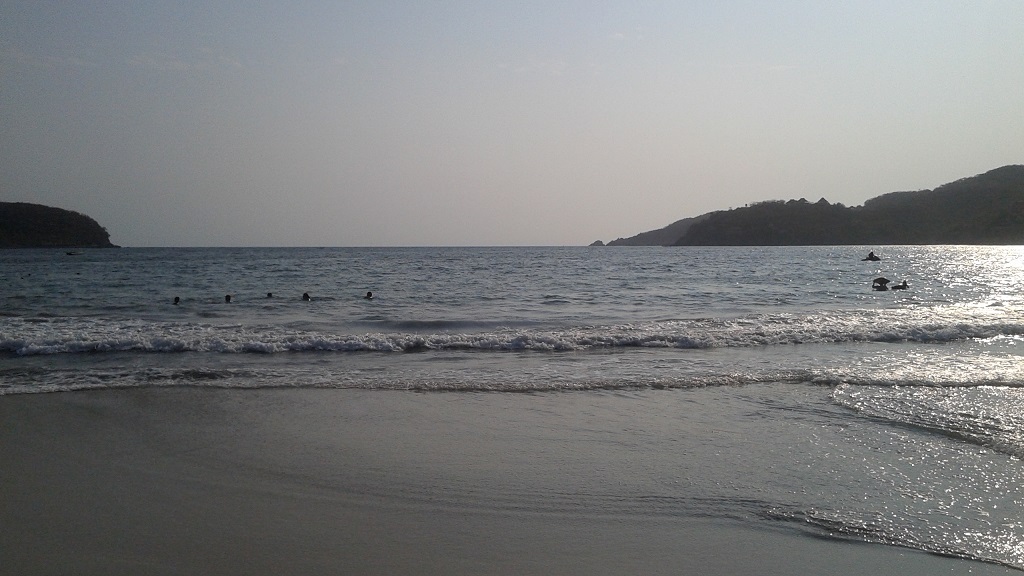 The Sunset as Seen From Playa La Ropa

And you know what perhaps the best find on the beach was?  The massage therapists!  They too worked under pop up tents.  There were a few tents in a row lined with tables and a handful of massage therapists eagerly waiting for your business.  The first massage I got was on my fourth day in Zihuatanejo and it was done by a woman named Vicki.  She incorporated several techniques, including hot stones.  I was impressed by her massage as her hands were strong and intuitive.  I had asked the man who ran the business component and he let me know that there is a massage school in town that the ladies attend.  Throughout the trip, I noticed the massage business end is run by men and the massage therapists are always women.

The next day, I got a massage on Playa Madera and, the following day, another one on Playa Las Gatas (Cat Beach) and the next day, yet another one back on Playa la Ropa.  Can you tell that the massages are habit forming?  You can get massages all week long and it still amounts to the price of getting one massage in the states – which is amazing unto itself, but not nearly as amazing as I felt each afternoon after being pampered to the max. 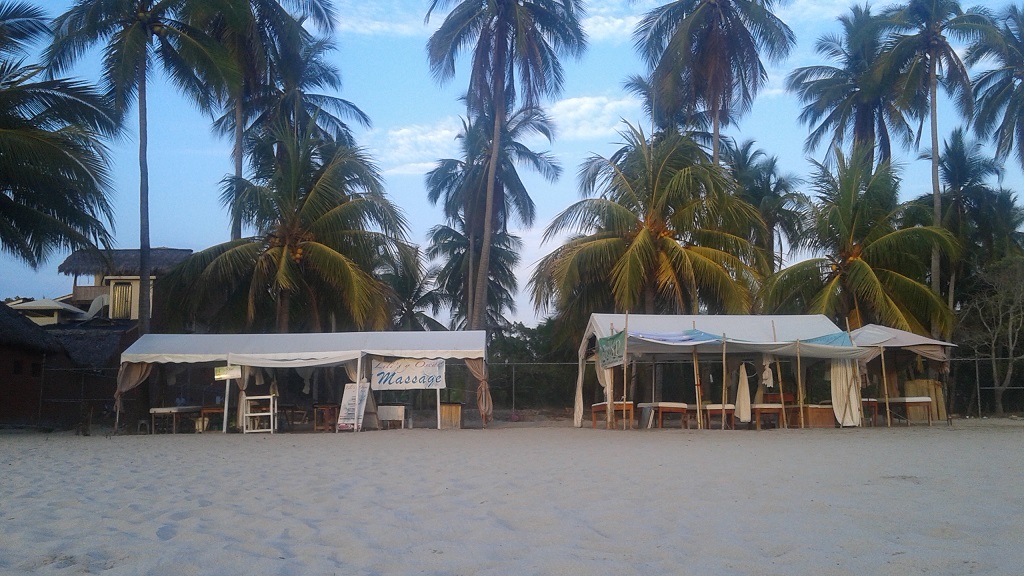 The Massages Were Some of the Best I’ve Had Anywhere, Anytime

One could technically walk to Playa Las Gatas and, if I had been staying on la Ropa, I may have done just that, but since I had already walked 30 minutes to la Ropa, I opted for taking a boat across the bay.  I went down to the marina and rented some snorkel gear and walked to the pier.  The boats arrived and someone came and shuttled people onto the boats and then in less than five minutes, voila, we were across the bay.  A met a man named Miguel on the boat and he let me know he worked at a restaurant on the beach and, if I followed him, he could give me a chair to get comfortable in for the day, for which I was very grateful.  The beach was smaller than la Ropa and clearly it was a favorite of locals as it was on the crowded side.  I realized he took me under his wing so I would patronize his business.  This was OK with me, since I needed to eat and drink somewhere.  He also set me up with a man who would be my snorkel guide.  I could go out alone, but the guide could take me to the best spots.  Six of us went snorkeling and we all held onto a surfboard that had handles on it.  I was on the end and held on with one hand and swam with the other.  We were out snorkeling for perhaps almost an hour.  I saw some coral on the sea floor but mostly it was rock with plants attached to it.  The fish were not as abundant as other places I have snorkeled in, yet the ones I saw were colorful with unique designs – stripes and patterns, almost psychedelic in nature.  My eyes were treated to shades of turquoise, fire engine red, and Easter egg yellow.  Oh yeah, there were also lilac fish and black fish and cobalt blue – it was a lot of fun and a feast for the eyes.  There was a boat a ways out and it dropped anchor near a statue of Jesus that was buried nearby.  Locals refer to the statue as the King of Kings.  One local told me the statue was put there for the tourists, but I don’t know if that’s true.  I held my breath and dove down to see the statue.  It was a bit scary looking to see a stone Jesus staring back at me! 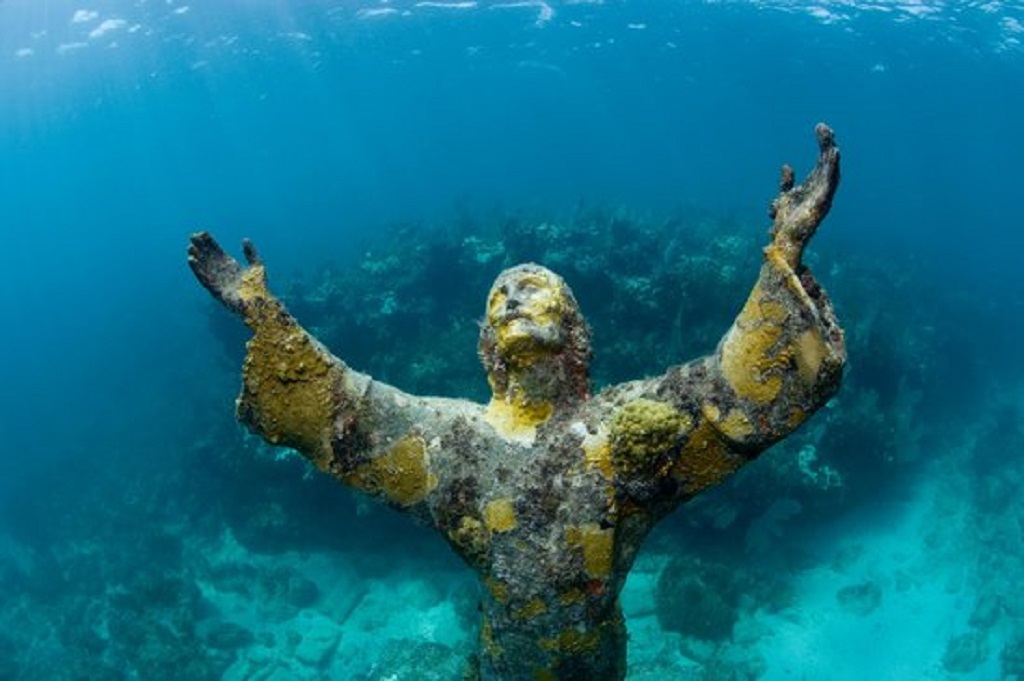 Back on the land, Miguel made sure my needs were being met and I was comfortable, and hydrated.  He also encouraged me to get a massage from the woman who worked at his establishment.  I am not sure how it all works, but I am sure they all work as a team to encourage beach goers to patronize their friends’ businesses.  This being said, Mexicans consistently deliver service with a smile and grace and it seems like they genuinely like their work and make it fun for all parties.  Add in the mariachi band and the occasional solo guitarist within earshot and it made for a sumptuous day.  I saw hotels on this beach, so with planning, one could stay here away from the activity of town.  But, if you need to get back to town, the last boat leaves at 5:30pm.

I did have one day that was not a beach day.  I shopped at El Mercado Central, cooked a bit, shopped at the craft market on Cinco de Mayo, went to the Museo de Archeological, and relaxed at the hotel.  I certainly enjoyed that day for what it was, but it was totally evident that the main appeal of Zihuatanejo is the beaches.  Relaxing in the shade, basking in the sun, swimming in the bay, getting massages, eating at the beachfront restaurants were the memory makers of this trip.  And while I tend to generally have a more active style of travel, for where I was at in life of late, fully indulging the relaxation experience best served my travel needs. 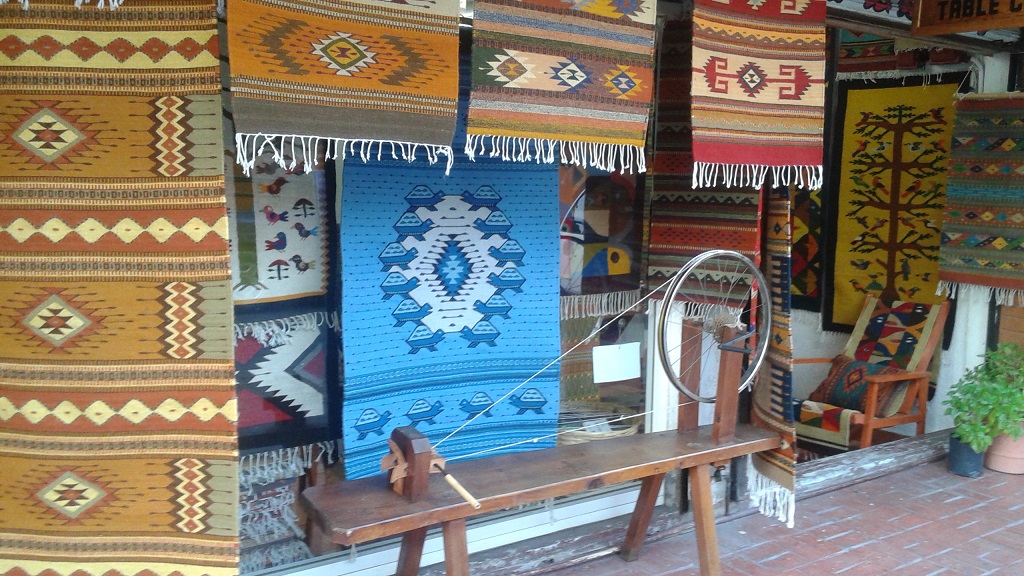 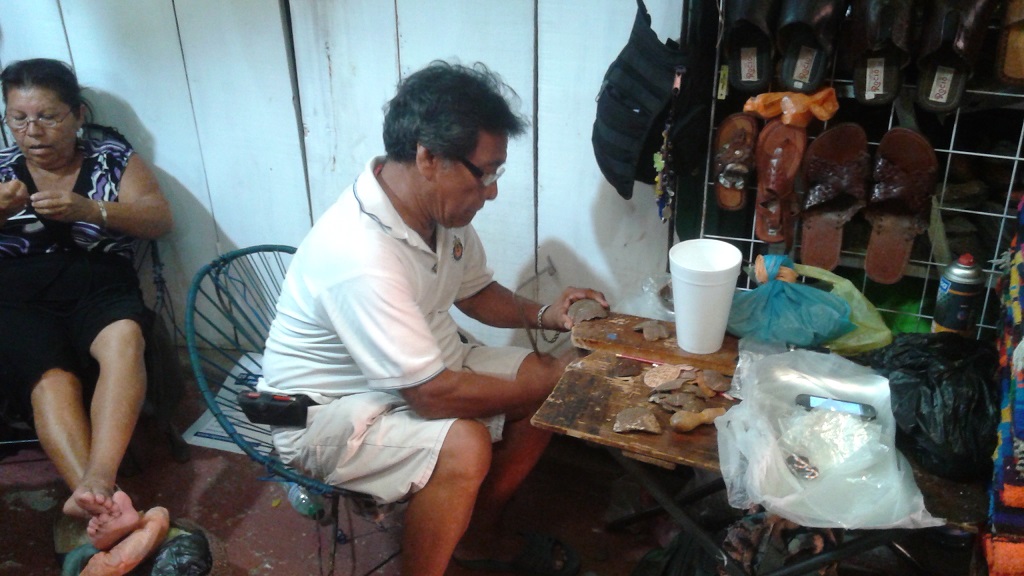 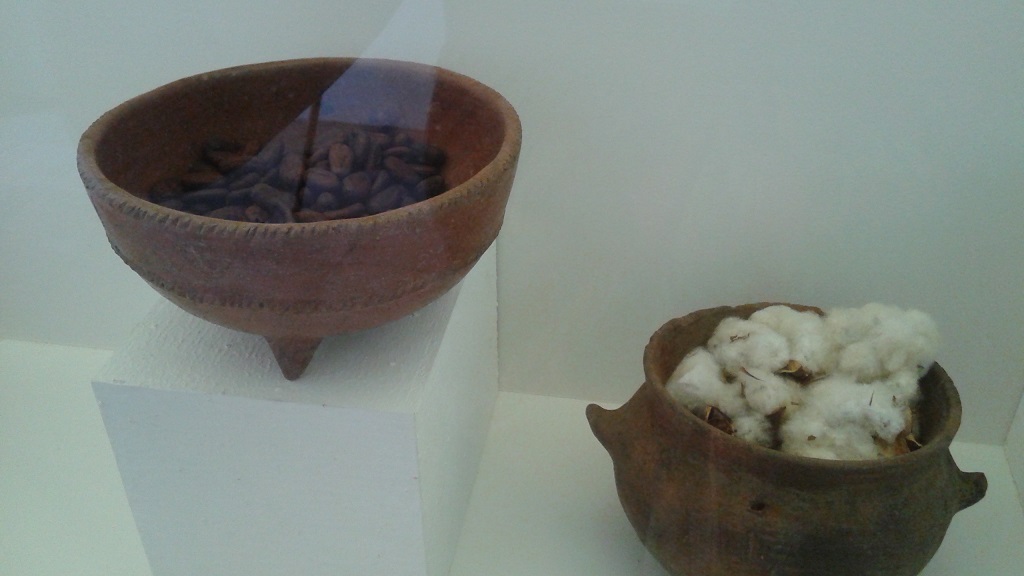 Cacao and Cotton Are Useful Plants Grown in the Region, Featured at the Archaeological Museum

It’s so easy to pass the days at a beach.  The waves coming to shore at regular intervals become almost hypnotic, like a mother who rocks her baby to sleep.  It seemed like before I knew it, the sun was setting, but alas, I knew tomorrow would be another opportunity to relish.  If I stayed for weeks, I am sure I would at some point feel the need to be more productive.  Yet for the week I spent in Zihuatanejo, I rose with the sun, was pulled by the tides to the beaches, and allowed myself to melt into the island time way of life that defines a large segment of Mexican culture.