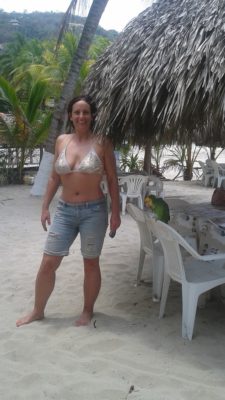 At the end of the day, the magic of travel is about the people.  It’s arguable, since certain styles of travel are scenery and geography based – but that aside, it’s all about the people.  It’s the people who raise the food and develop the architecture and create the history that any particular region is steeped in.  For the most part, when I travel, I find that locals are very friendly and accommodating and eager to help me make the most of my time in their country.  People have a lot of pride in their homeland and with good reason – it’s the land that they know and love and it has provided for their needs throughout their lifetime.

With ten days in the region, I interacted with many people and I am going to highlight but a few to show the variety of interactions I had.

Christian was a Frenchman who married a Mexican woman.  He spoke French, German, English and Spanish – all them with a French accent, which was interesting to listen to and try to decipher what he was saying.  They had four children and their whole family lived in the hotel I stayed at, Hotel Las Salinas.  The older child worked there and I am sure the younger ones will too, when they are old enough.  The reason I picked Christian’s hotel is that it had many rave reviews on TripAdvisor, all mentioning how helpful he was.  My experience mirrored others and I appreciated being at a small hotel with a relaxed vibe.  My second day there, he noticed that my back was sunburned (I wasn’t able to reach my back to apply sunscreen) and he told me to approach the maid or his wife tomorrow to have them put on the sunscreen.  He taught me how to say my back is red- Me espina es roja.

When it came time for me to book a room at my next hotel, I asked him for help.  I had called the hotel and I knew from how fast they were speaking Spanish, that I wouldn’t be able to communicate my needs to them.  So Christian called and the funny thing was, he even had trouble speaking to them – I heard him repeating himself and enunciating, getting very frustrated.  I was glad it wasn’t just me! 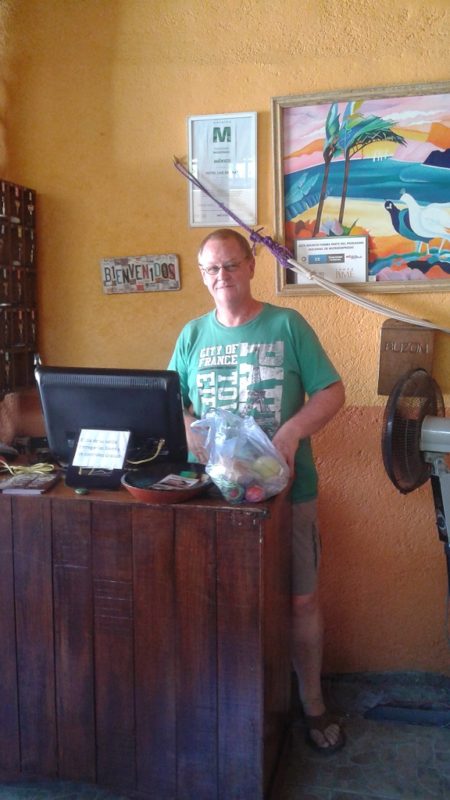 Christian Is a Super Hospitable Host

As I was checking out, Christian offered to drive me to the bus station and I accepted.  I got in the car and within seconds, he took off like a bat out of hell, weaving in and out of lanes, beeping and then he said to me “you in Mexico now, we drive loco (crazy).”  This being said, he was super helpful and made sure I got on the right bus and bid me a hearty farewell.  He and his family live a very simple life and although I would feel a lack of personal space with a big family in a small section of a small hotel, it clearly was a very reasonable way of living for Christian and his family.

The day I was at Playa Municipal and experienced my own mariachi band, I was also approached by Roberto, who sells silver for a living.  He came up to me and chatted me up for a bit and then mentioned his silver and I agreed to look at it.  He said that Mexican’s don’t like plata (silver) – they like gold.  But Americans and Canadians like plata a lot.  Roberto spoke some English and explained that he was from Acapulco and currently his family is split between there and Zihuatenjo.  He did get me to buy some silver jewelry and he told me that he can sell it cheaper than the stores and that sometimes stores sold fake silver, but his was the real thing.

Well, the next day, when I was shopping at the craft market, one of the vendors approached me, trying to get me to buy his wares.  I was actually shopping for gifts, but not necessarily silver.  I mentioned I had gotten some silver on the beach, which at that point he informed me that the silver people sell on the beach is fake and what he sells is real.  Although he spoke very little English, he was very adept at yelling the phrase “Let’s make a deal!”  I laugh thinking that I do the same thing when I travel.  I learn a phrase or two and overuse it, just because that’s all I can say – how funny it probably sounds to the locals.

On my second evening, when I got back to Hotel Las Salinas from a day on Playa la Ropa, I met five beautiful Mexican children in the lobby.  They were all between age two and nine.  They live near Mexico City and were on vacation with their parents.  They were very excited to meet an American and wanted to learn to speak English.  For well over an hour, we traded language lessons.  One of us would point at an object and say the word in our native tongue and then the other one would give the translation.  Shell – concha.  Door – puerta.  Hair – cabello.  And so on and so forth.  When I retired to my room that evening, I left the window and curtains open to get some fresh air.  Well, in a matter of minutes, guess who was climbing in my ventana (window) to give me some flores (flowers).  The sweet Mexican children – a whole pack of them with smiles and an eagerness to learn. 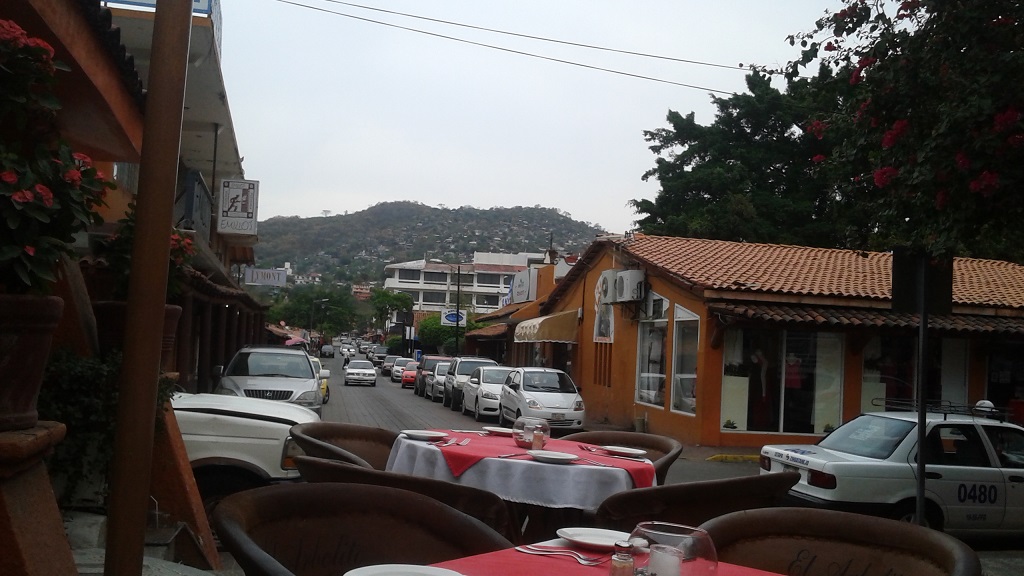 A Typical Busy Street in Zihuatanejo

I came home one evening from the beach and, while filling up my water bottle in the lobby, one of the guests greeted me and engaged me in conversation.  He was with his wife and there were two other guests that I had seen on the premises the night before.  I sat down to chat with them and ended up doing so for a couple of hours.  The four people were all interesting and had their own unique set of circumstances that brought them to Zihuatanejo.  The two young men were European – a Frenchman and a Portuguese man.  They were well traveled, the Portuguese man spoke six languages fluently (including Lithuanian) and he was currently working in Mexico City for the secret service for government officials.  He and his French friend were on a short vacation to Zihuatanejo.

The other two people, Alan and Angelika live in Vancouver, BC five months a year and travel the world seven months a year.  They have been living like this for the better part of a decade, since they are both retired.  They sold their home in BC, and have a houseboat there instead.  And they have homes in Thailand and Panama as well, so much of their travel involves living in their homes.  But this year, they did less of that and spent more time visiting other countries, sometimes staying for a month or more.  They had just come from the inland part of Mexico after taking Spanish immersion classes and this was their first night in Zihuatanejo.

Alan used to work in the business world and honestly I could totally see him as the type of person who knew how the grease the wheels when a complex situation got sticky.  He just had a quality about him that makes you want to open up and trust him.  He shares his thoughts on matters, but never in a way that has airs of arrogance or pretense.   He is also equally interested in whomever he is speaking to, as I observed him interact with others through the night.  He mentioned that he prefers to stay in small, family run, budget type hotels, because to him, so much of travel is about the people.  I smiled and told him I feel the exact same way – which explains why we met in our mutual hotel lobby.  At the end of the night, when one of Christian’s sons told us it was time to disperse from the lobby, I said goodnight and commented to Alan “I bet you and Angelika are the type of people who just have friends everywhere you visit on the planet.” And he smiled and confirmed my statement.  He was on to something – traveling is all about the people. 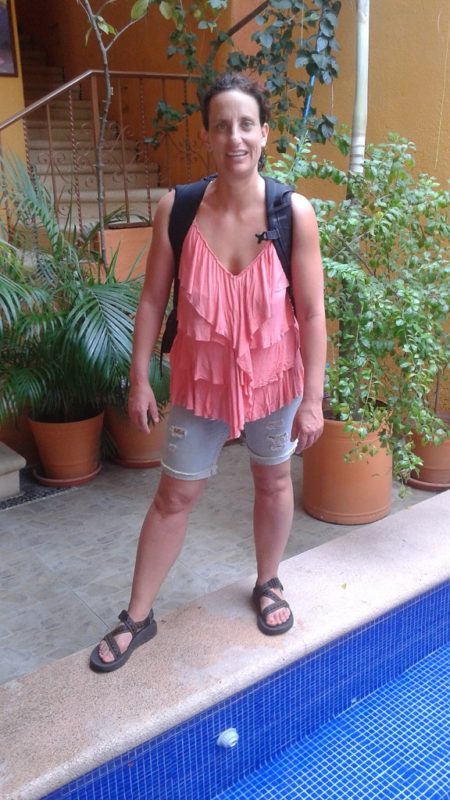