Sep. 4:  The loft is decidedly a noisy place on a holiday weekend.  It wasn’t obvious at first, but if it wasn’t the noise carrying from the bar downstairs, it was the neighbors having a party.  And when they settled down, the seagulls starting conversing loudly.  But there are a lot of benefits to urban living, so who’s complaining?

We were heading to the Hotel Grand Pacific, which had a gym, and, on route, we saw a boat show in the marina.  Each and every boat appeared to be handcrafted and extremely artistic.  We walked down and took a closer look at the boats.  Each one had a sign about where it was harbored, what year it was built, what style it was built in, and who built it.  The boats were not ostentatious, even the bigger ones.  They were labors of love, built by hand by sea lovers around the Pacific Northwest.  My guess is that a lot of the sailors know each other and that there is a community between these kindred spirits. 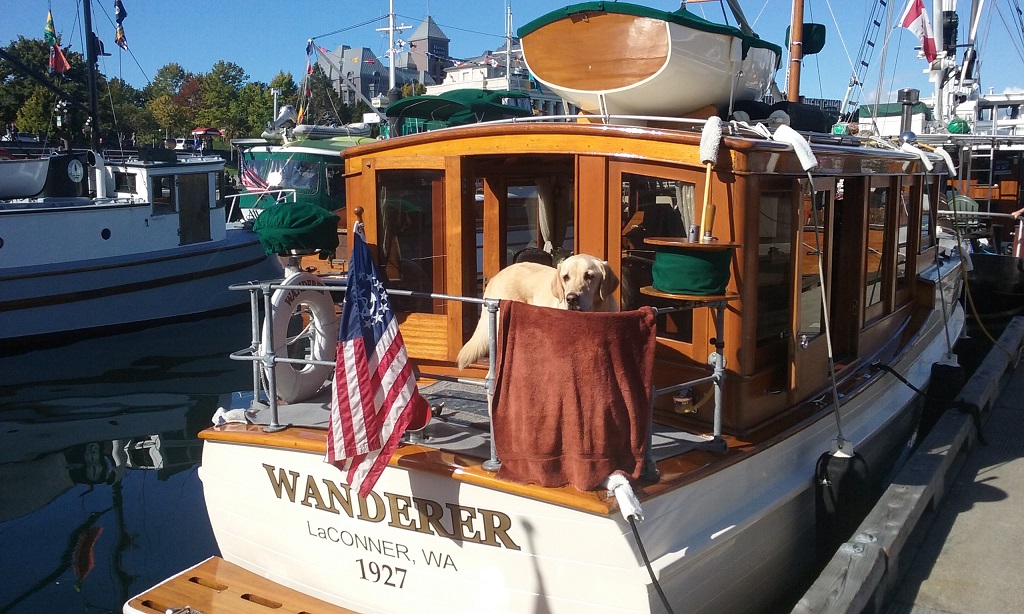 These Handcrafted Boats Are Labors of Love

In another area of the marina, there were water taxis.  Some were painted yellow like a taxi in NYC.  They literally looked like a taxi, with the black and yellow checkers on the side.  Scooting in and out of the harbor, you could take a designated tour or simply use it to transport yourself up the waterway to a destination.  I saw advertisements for pub crawl tours via water taxi – innovative. 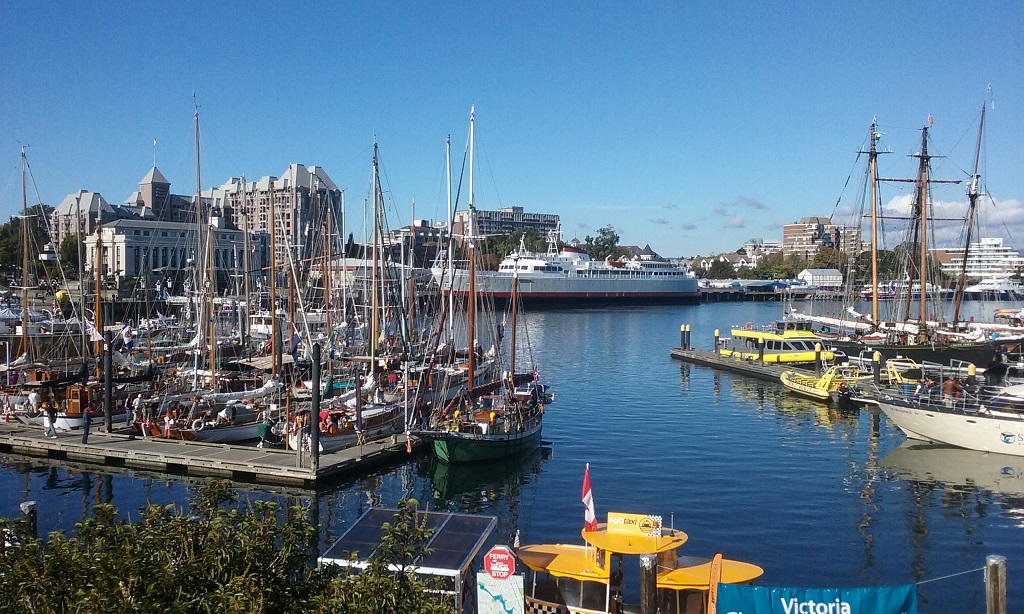 Notice the Boat Taxi in the Foreground

While going to the woods on a holiday weekend can be a drag because of the crowds, a city can be a fun place during holidays, because there is even more going on than usual.  The Inner Harbour was abuzz with activity.  The Empress Hotel and the Parliament Building lay at the heart of Inner Harbour and both had European Style gardens in front of them.  Although we took our time, we eventually did make it to the gym and spent 90 minutes working out.  We met some locals there and learned (much to my surprise) that there is no real health food store in Victoria.  Although a Whole Foods may be coming in.

After the gym, we opted for renting bikes for the day.  The walk to the bike store took us through the back of The Empress Hotel, where painters were set up selling their wares, as well as setting up their easels to paint.  The art focused on scenes of Victoria or portraits, which made a lot of sense.  It looked like a slice of Central Park in New York. 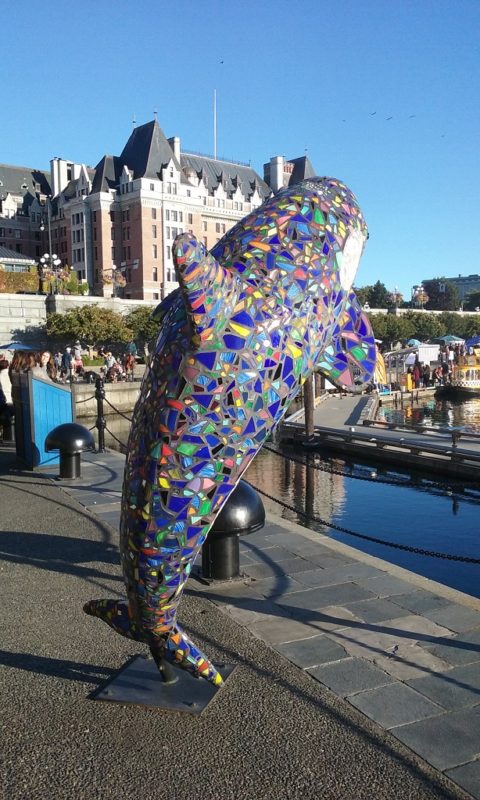 At this point, we were starving and a food cart serving smoothies did the trick, at least for the moment.  Although for something more substantial, we headed up to Chinatown for lunch and stopped at Ocean Garden.  We looked at the portions others were being served and we opted for just soup!  The sheer amount of rice or noodles that constituted a plate of food was overwhelming.  In fact, it would have filled two weeks of allotments of carbs, in one sitting.  No thanks! 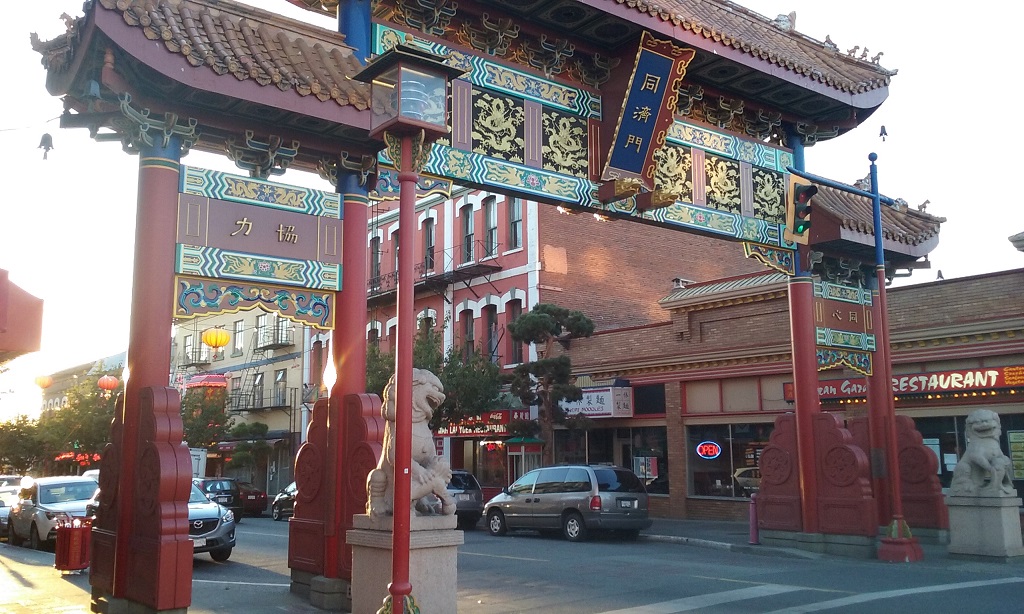 The Arch Marks the Entrance into Chinatown

After being satiated, we got out our bike map and we decided to head out to Oak Bay, which would take us along a trail following the coastline.  In town, it is busy and bikes are not allowed on the path, only pedestrians.  For much of the way, the trail  took us along a curved road and followed the rugged coastline.  We got to see lots of sailboats and barges in the distance.  We later learned that the barges were carrying containers that were in a holding pattern before getting into Vancouver.  Containers are such an important aspect of global commerce these days that I see them every time I am by the sea.  For example, there were stacks of hundreds of them when I was in the wild Camargue of France.

The Olympic Mountains appeared regal in the distance with puffy clouds floating over them.  The water breaking into the mostly rocky shore completed the picture. 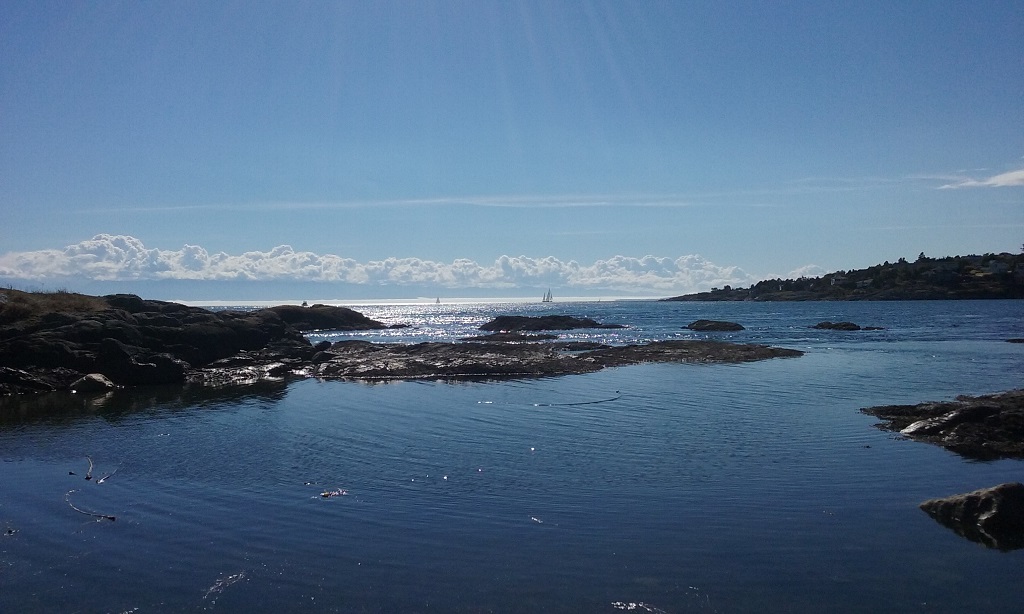 On Route to Oak Bay 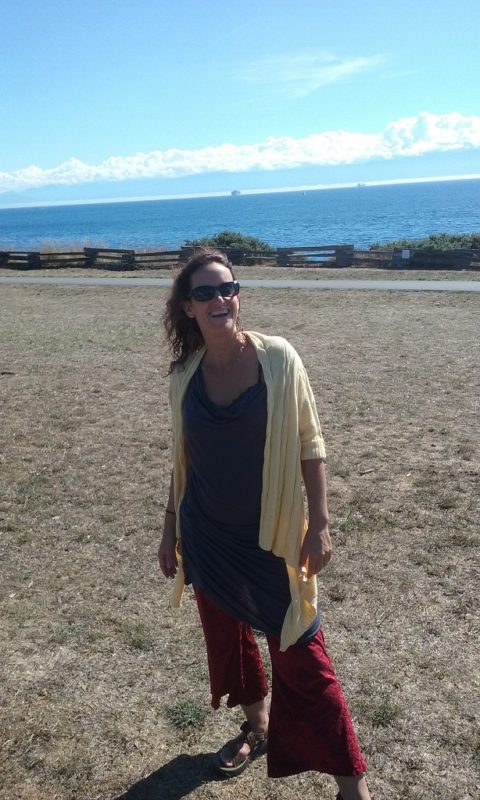 A Photo Op Was Calling

The road we were on wound through some older neighborhoods with charming homes.  In spots, newer homes were being built.  And while the gentle hills got our legs working, the reward of the expansive panoramic views was well worth it.  Eventually we wound our way down and found a beach of sorts.  There were a couple of driftwood huts.  And I smiled thinking that I see these wherever I go and imagining the fun people must have had creating them.  You know what looked very enticing?  Two wooden painted chairs perched up on some rocks.  I noticed a couple sitting there and thought “they really have the right idea”.  When they got up, we spoke to them and I found out the chairs are public and grab ‘em while you can.  Sitting in them and becoming part of the very picturesque scenery was delightful.

A Very Sweet View Was All Mine

At some point, we continued east and then the road headed north up to another marina.  We decided to follow the suggested route from the map we got at the bike store and this directed us back west on streets inland.  We stopped when we hit a very cute village called Oak Bay.  Oak Bay is a small community outside Victoria with its own bistros and banks (four banks for a town a few blocks long!).  I wonder what’s going on there?.

A modest Turkish grocery store caught our eye and we wandered in.  It had a lot of ethnic foods on narrow, packed isles, but it also focused on local foods and so we stocked up on local veggies, including strawberries that looked especially luscious.  The friendly staff leaned over the deli counter and gave us some banana bread on the house.  We also went next door to the fair trade chocolate shop and tried some samples and picked up some high percentage chocolate for ourselves and gifts.

The bike ride home brought us by The Government House, which is a remnant of the English rule.  As we were looking at the House, we met some locals.  When we told them we were from the States, they said if Trump got elected, they were building a wall to prevent Americans from coming in droves. 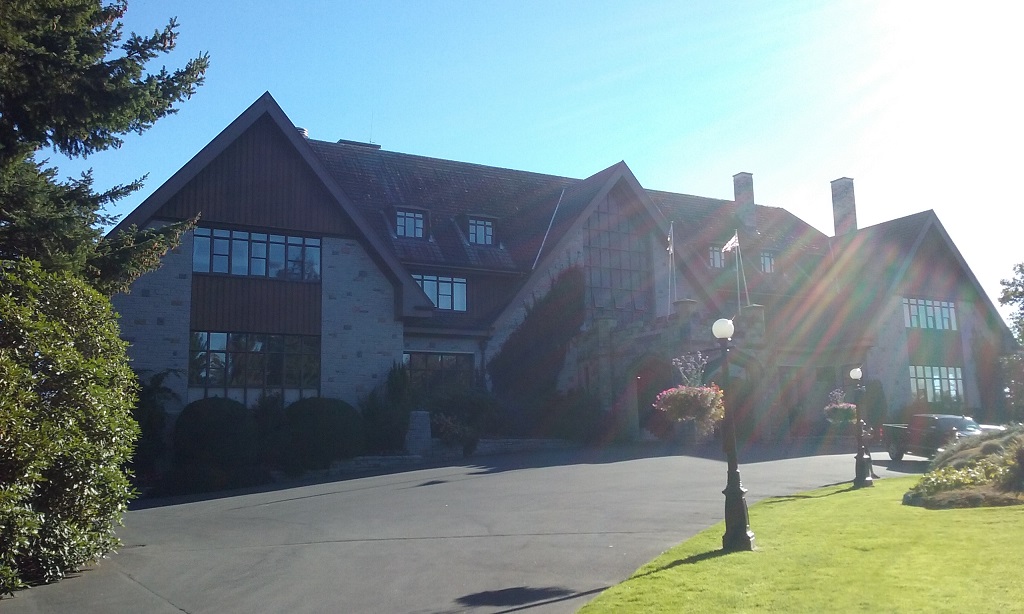 Prince William and Duchess Kate Stay Here When They Visit

Nearby was Craigdarroch Castle, also reflecting a British style.  We admired it from the outside, but decided to keep moving thinking we might see it another day.

We thought we would sample more ethnic food and between getting a recommendation from a local and from the guidebook, we went to Don Mee’s.  The food was a tremendous disappointment.  The ambiance was nice and the food was not as bad as Chinese food in Oregon, which is a pretty low bar.  But it lacked flavor, it had no salt and no spicy zing to it.  The pork ribs were breaded and fried, so we could barely taste the meat.  The veggie and scallop dish had overcooked and chewy scallops.  Not fun.  The green beans were acceptable at best.  And I guess if I want to be nice, the fried rice was acceptable at best as well.  The service was not very good.  It took a lot of effort on our behalf to keep getting more water to drink.  The chili sauce and hot mustard were barely hot and so I needed multiple portions to give the food any flavor.  And it was a lot of work on my part to even get the sauces from the wait staff. 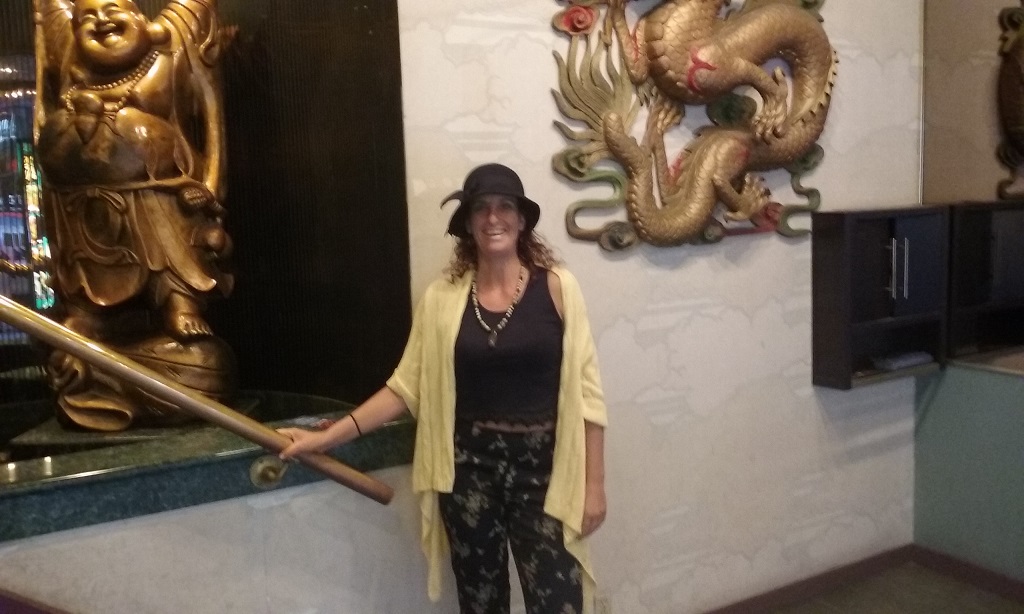 A Meal at Don Mee’s Was Not Worth a Repeat

Since these days, I rarely indulge in a rich meal, it was even more of a disappointment.  I tried to console myself and found what looks like a top rate northwest inspired French restaurant, named Saveur.  But they are closed Sunday, then closed for Labor Day and because of Labor Day, they are closed Tuesday.  I did however look at the website longingly!

After dinner, we walked downtown to try to move that non-satisfactory meal through our bodies.  The music was still jamming and the vibes were running high.  The people at the boat show were having their own parties and I bet a lot of camaraderie to boot.

The prettiest and most notable sight was the Parliament building decorated with Christmas lights.  Although I believe it is lit up every night of the year, it truly looked stunning and celebratory.

Once we returned home, I whipped up some dessert and we enjoyed it on the rooftop.  I warmed up the banana bread and drizzled melted dark chocolate over it.  And to top it off, I doused it with fresh strawberries.  All of the components of the dessert came from Oak Bay just hours before.  The dessert was honestly nothing to write home about, but it was not as bad as dinner.  And the tea was excellent. And the scene from our rooftop completed the experience for the evening. 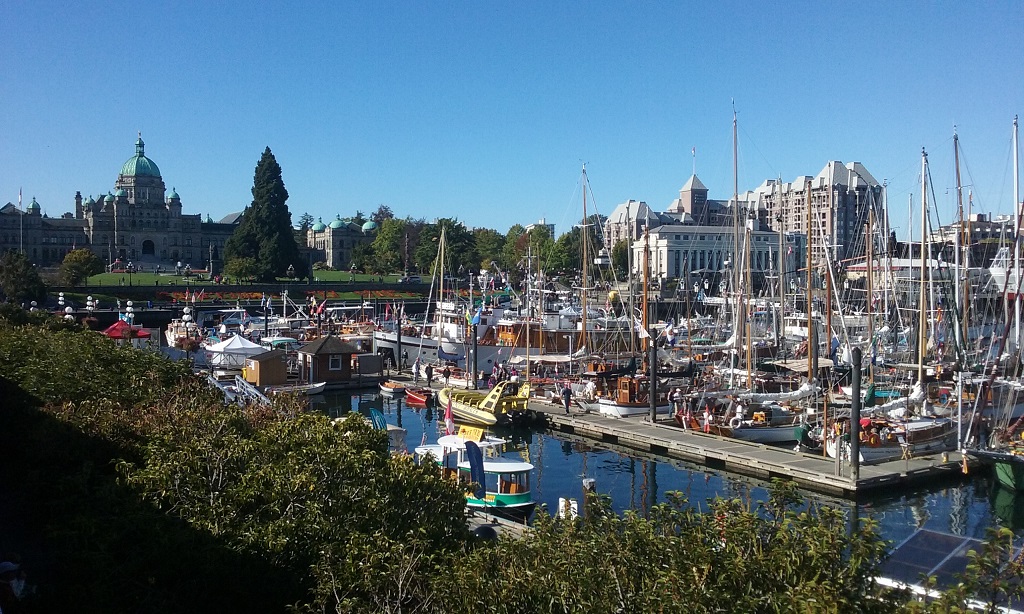 The Inner Harbor Is the Heart of Victoria