Royal BC Museum and Downtown Victoria 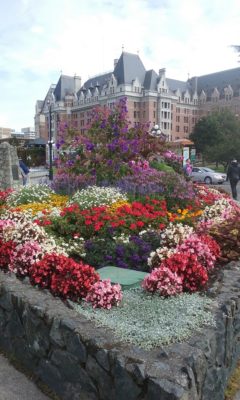 High Tea Is Served at the Empress Hotel

Sep. 5:  We had a bit of a groggy start to the day.  I slept like a rock, but my body was running slow due to the shitty Chinese food from last night.  Michael did not sleep well, due to the party in the alley and in the apartment next door.  But we were determined to get moving, because we have get moving personalities.  Today we wanted to explore the Royal BC Museum and downtown Victoria.  A trip to the gym provided rhythm and seemed to work out some of the funk.

After the gym, we saw there was a festival on the Parliament lawn and checked it out.  I got a total kick out of female vocalists doing renditions of Stevie Wonder tunes.  The feeling from the people dancing and celebrating was contagious.  Kicking back and celebrating is absolutely something that must be done in places where the summer is short.  The Pacific Northwest has short summers, but they are dependably warm and dry.  This creates the perfect environment for summer festivals. 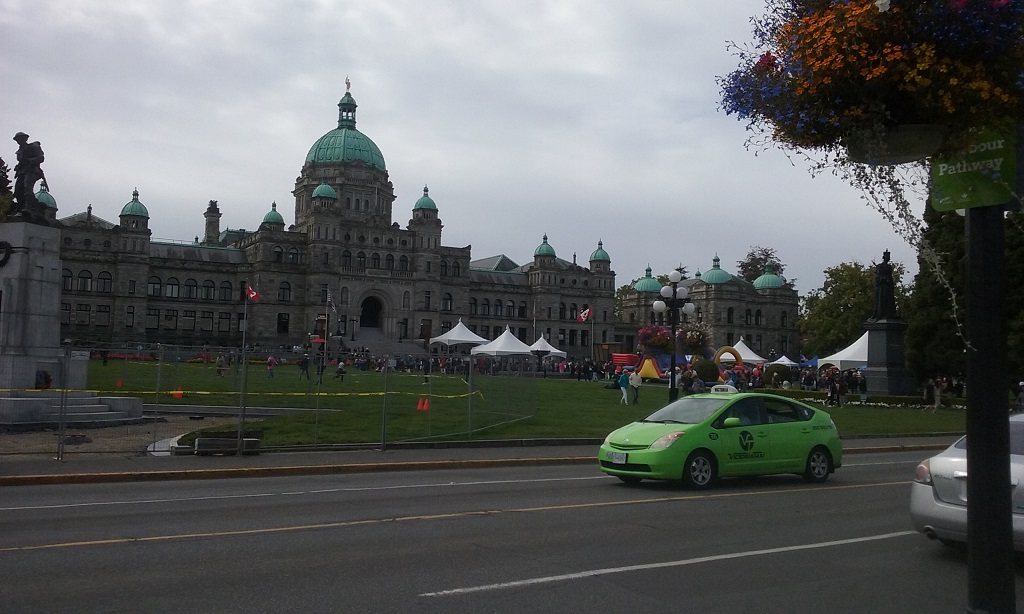 For Comparison I Pictured the Lawn of the American White House

We stopped in The Empress to research high tea.  It sounded like it would be a fun one time experience.  Yet, I learned it was a huge amount of pre-determined food, a lot of which was sugary, so we chose to skip it.  I was hoping for tea and scones, not endless platters of sweets.  We opted for lunch à la Chez Brown.  Roasted chicken and veggies – very simple – totally awesome.

From all that I had researched, it sounded like the Royal BC museum  was a must do.  It was ample sized, but not overwhelmingly large.  It was currently featuring a six month exhibit on woolly mammoths.  All sorts of interesting factoids were presented.  Visitors could touch the teeth of ancient mastodons on display.  They even had a whole one month old mammoth preserved!  Her name is Lyuba (the Russian word for love) and her 42,000 year old body was discovered in Siberia in 2007.  It is believed that wooly mammoths went extinct in part due to climate change and in part due to human hunting.  They were not adapted for the warming world, post ice age.  And with an ebbing population and humans continuing to hunt them, it wasn’t long before they were goners. 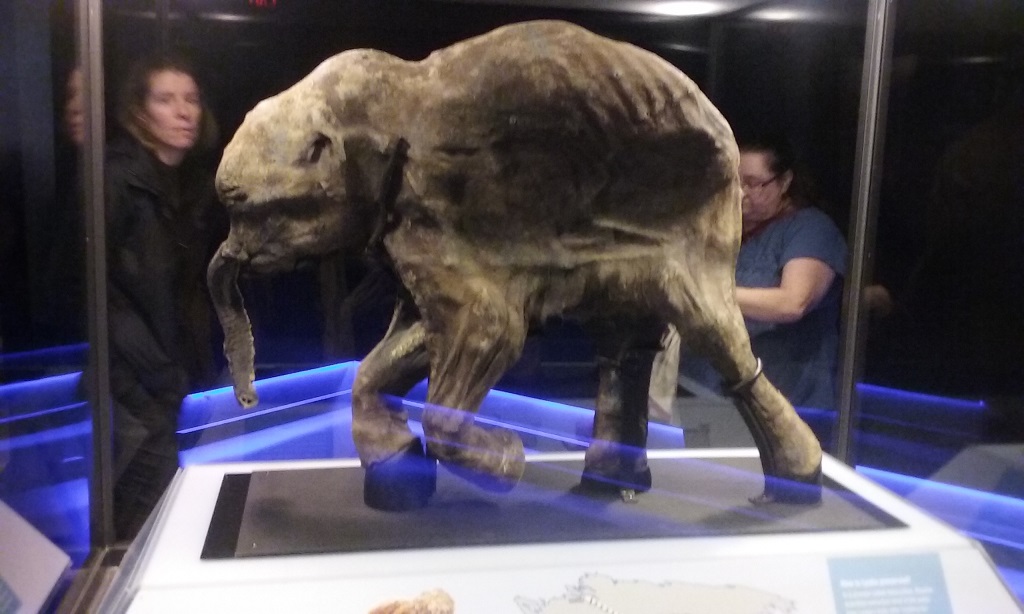 These Mastodons Used to Be Abundant in North America

The museum featured another permanent exhibit on the people and history of British Columbia.  There was a section about 1700’s and beyond, yet we were more interested in the native section, so that’s the one we checked out.  The First Nations Languages represent 34 different languages that used to be spoken in British Columbia.  Like in the Unites States, the natives were forced to learn English and it was just one way that the native culture deteriorated.  Another area compared and contrasted the inland and coastal natives.  A lot of how they needed to survive, mirrored the exhibits I have seen on the Alaska natives.

What was very cool was the Totem Hall.  The room was filled with about twenty totem poles.  A wide variety of tribes were represented.  At first glance, they all looked more or less the same.  But upon further examination, there are different carving styles, and this gives insight to the tribes that created them.

Exiting the museum, we saw signs for a Food Cart Festival.  Curious, we followed the signs and it brought us to a small parking lot with a handful of food carts.  Victoria has not yet caught up with the Portland food cart seen.  And I’ll leave it at that. 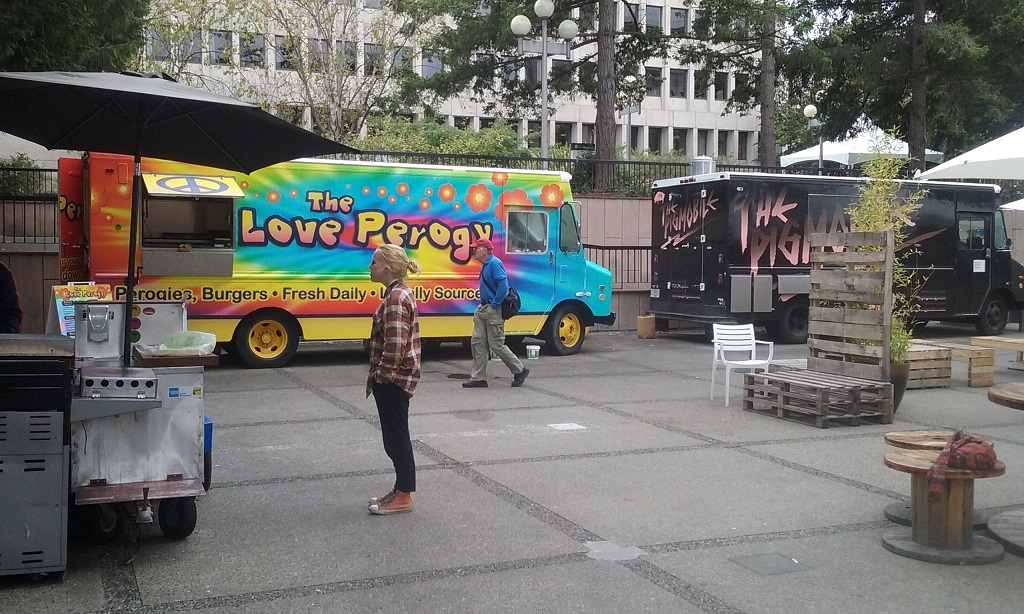 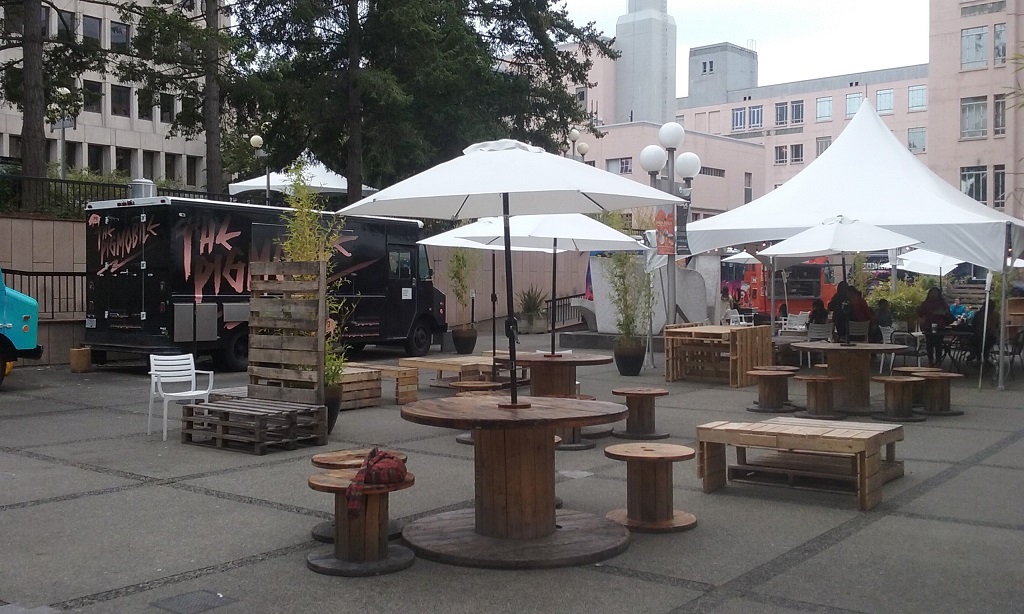 Calling the Food Cart Festival a “Festival” Is a Stretch

For dinner, we went to The Commons, a place I found out about online, before we took the trip.  We started with two dozen oysters.  They had a map at the table to show the sixteen different places in Vancouver Island that the oysters could possibly come from.  That night, they were serving the Paradise Cove oysters from Deep Bay.  These were literally the BEST oysters either of us have even had.  Rich, creamy, sweet with a smooth aftertaste.  Paris oyster bar, eat your heart out.  Instead of the traditional mignonette, the oysters were served with four different types of condiments.  Mignonette in a glass jar that you would expect to see maple syrup served in (with the spring loaded top).  Ponzu sauce.  Green tomatillo sauce. And cocktail sauce.  In short order, we slurped them all down and ordered another dozen as well as a salad, whose greens I could tell were picked that day.

The service was efficient and upbeat.  And the setting – The Commons could have been plopped down in Portland and it would fit right in.  Part of the walls were made into chalkboard and on them were hand written signs talking about the restauranteurs’ farm.  For example, they produced two tonnes of squash this year.  And they compost the restaurant remains on their farm.  Both their menu and their website list what’s in season.  The farm is not limited to vegetables, not that there would be any shame, if it were.  But they also raise animals.  All the elements of The Commons fit together nicely to make for a relaxing and positive dining experience.

They also have a restaurant right next door, a more upscale version, all based on the same farm to table principles.  I am sure all the food is awesome, but if you only stuck to oysters, you would still be a very happy and healthy camper.  I am a bit bummed that Saveur is closed for three of nights that we are here, so maybe we will go back to 10 Acres tomorrow night. 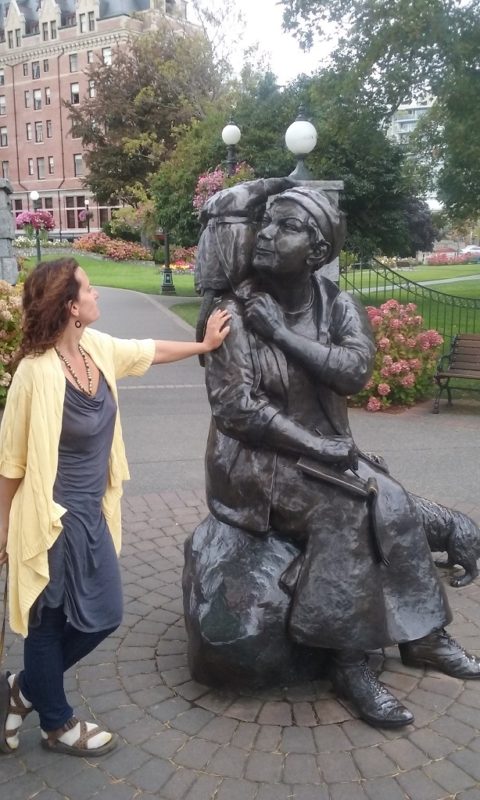 Art in the Form of Sculpture

There was still some daylight to be had, so we spent the evening strolling a bit further into the Victoria reaches to see the neighborhoods where Victorians live.  Walking down one random street we noticed four churches and a synagogue.  Some of them imitated the Gothic Style.  All in all, the buildings were very appealing from the outside.  We met a local and in striking up conversation, she mentioned that while the inside of buildings can be renovated, the outside must remain the same.  This building code is what helps maintain Victoria’s old town feel.  Without any particular destination we enjoyed the sensation of the cool rain while we eventually made our way back home. 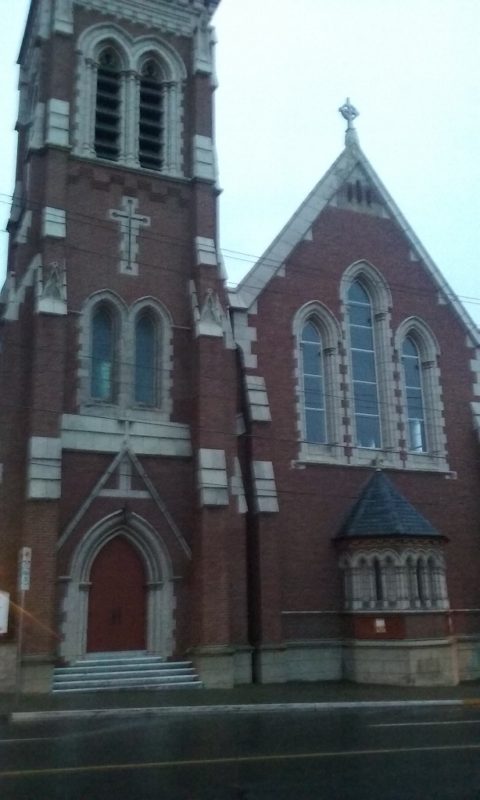 Another Church a Half Block Away 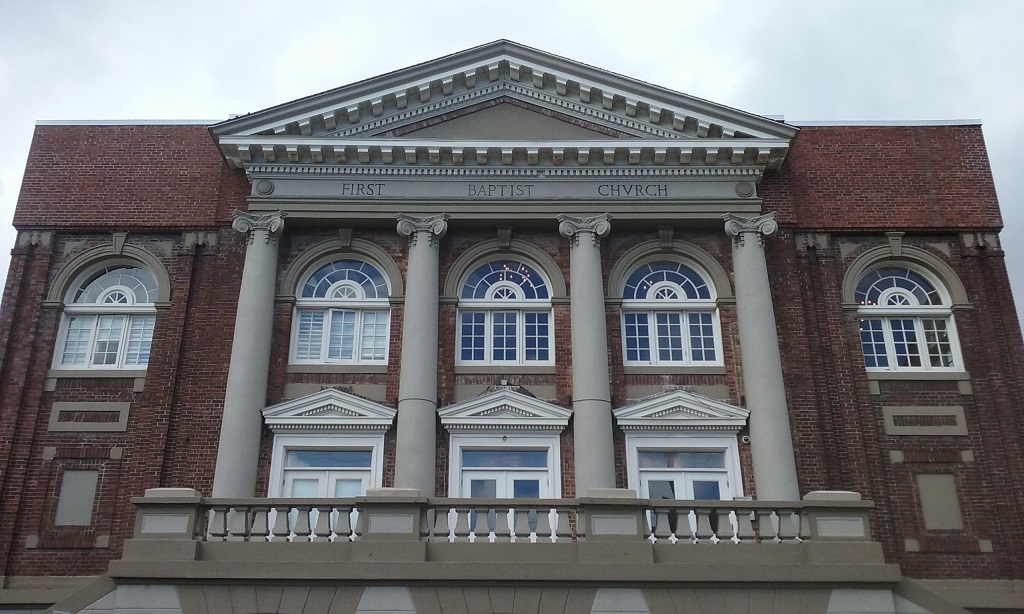 When we got to our apartment on Yates Street, we saw that Lucky Bar had a line of literally hundreds of people packed onto the sidewalk.  Now this explains why we hear such a racket in the loft!  But it’s Labor Day and people like to celebrate by partying and not laboring. 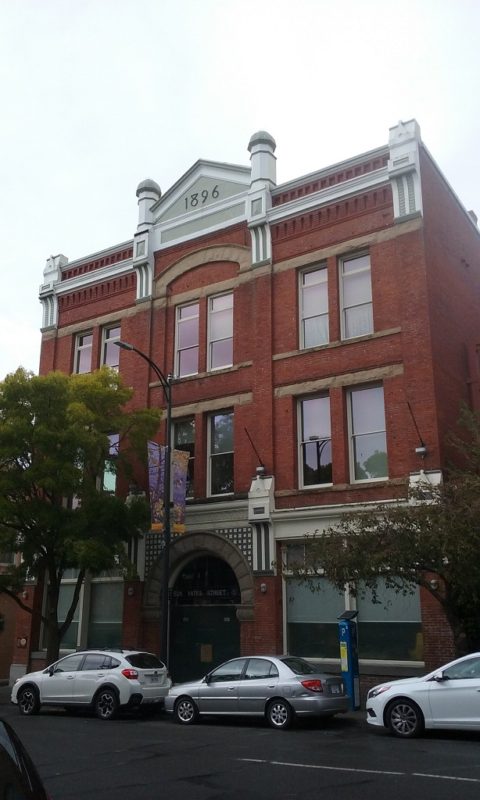 The Lieser Building on Yates Street