Sherri’s Top 5 Things to Do in Vancouver 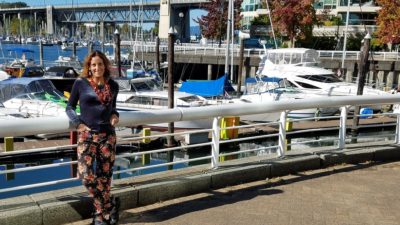 Oct. 2-6: It is not always easy to come up with only five favorites of a city.  There’s always an extra handful of contenders.  Though, I have cultivated a ritual that helps me sort the “that was great” from the “must do’s”.  At the end of a trip, usually on my last evening, I take a few moments to meditate on each region I visited (or in this case, there was only one destination), and come up with the experiences that moved me most and I believe will leave an impression.  If I am traveling with someone, we each come up with our two or three favorites.  But I digress, so here goes. . . .

Sherri’s 5 Top Things to Do in Vancouver

Poetry Slam at Café Deux Soleils Is Not for Slouches!

After house management gave us a careful screening to make sure we were not reading and did not know anyone who was reading, Dan and I were asked to be judges.  To say the least, this upped the value for us, as we embraced practicing our skills as esteemed literary critics.  The slam is held every Monday night at 7 PM, but get there early because Cafe Deux Soleils fills up and you could be left without a seat.  Come even earlier, if you want to stroll through the lively Commercial Drive district.  People watching, independent shops, and lots of ethnic food dominate this hood.

Duncan Shields, a long time Vanslam poet, did a guest reading before the competition started.  He attracted quite a draw as was evident when seats opened up once he was finished.  He is published and would it be cliché to say he had a way with words.  Well, it may be, and he did.  From a literary perspective he was the most accomplished of the evening.  Since we were not judging, we were able to just sit back and absorb his wisdom.

The contest has a modicum of rules – mainly dictating how long you have to read your poem in each of two rounds.  There were five sets of judges, ranging from just a couple like Dan and myself to a set that had five or six collaborators.  After each poem was read (or in many cases recited) each set of judges had just moments to come up with their score and hold it high up for the Master of Ceremonies to see.  Each scoring was greeted by cries of agreement or disagreement from the audience.  On our night the initial set of twelve contestants in the first round was whittled down to five contestants for the final round. 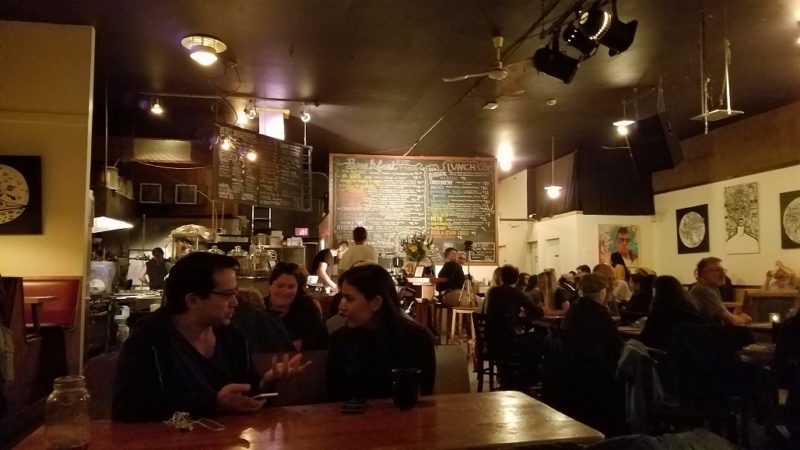 This Cafe Serves Up a Wonderful Cup of Poetry

Lots of ideas around political and social and environmental justice were to be had.  It is Vancouver, BC after all, the liberal city that it is.  I really liked the trans person’s poetry and was pleased when they moved on to round two.

Round two consisted of five contenders and at some points, the air became thick with tension and strife.  In many cases the poets had the courage to stand before a crowd and reveal their raw selves and the anguish that they live with.  Sometimes there was a light moment – perhaps about the kid that picks his nose and all the implications of it.  The poet wants to meet him, but not necessarily shake his hand.  No matter who won the slam, all of the offerings were engaging and moving.

Let me sum it up by saying this is a great reason to get out on the town on a Monday night.  Have a couple drinks, kick back, and have your mind stimulated in unexpected ways.

It’s a new hotel with an old history and Dan and I had the pleasure of staying there.  I am happy we did and I would definitely consider staying there again.  I like the hotel enough, but mostly, I like what is behind the scenes.

The building is a few blocks off the heart of Gastown and it used to provide rooms for First Nations people who were visiting Vancouver, BC for health care or to see relatives and did not have the resources to pay for lodging. 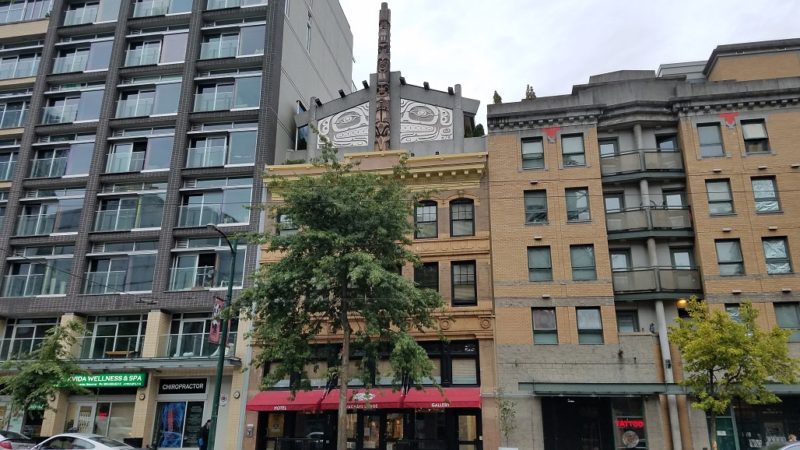 The Totem Pole Atop the Building Honors First Nations People

The fifth and sixth floors have been converted to hotel rooms that fund at least partially the housing for the First Nation artists who reside in the first four floors.  Maybe a bit of the Robin Hood theme going on?  And I say that in a good way.

The artists have access to a multi-media studio in the basement where they work at their own pace, creating art that is showcased in the gallery. The gallery is open to the public and serves as the lobby for the hotel.  For art collectors, it is a real gem. 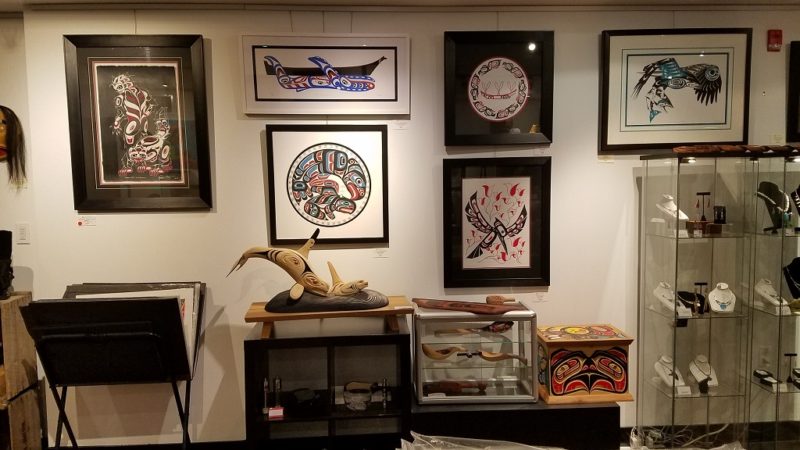 On the sixth floor, there is also a traditional smudge room and a sweat lodge.  With the art and the traditional experiences the residents contribute to Skwachàys in the ways that they best can.    The community feel is evident.  For instance, every time we came across a resident (walking down the hall, in the elevator), they asked us if we were enjoying our stay.  Very concerned and attentive!

I do have one funny thing to share with you about our stay.  It should not deter you from staying at the hotel, but it might possibly deter you from staying in room 604.  The area code for Vancouver is 604.  One night, around 2 AM, the phone rang and someone was asking for a taxi to come to the hotel.  Although we tried to explain that we were not a cab company, I am afraid they may have had a little too much to drink.  They called back three times!  I believe someone was dialing a local number, but forgot to dial 9, to get out of the hotel phone system. When they dialed 604, it went straight to our room.  After the third time, we unplugged the phone and that was that! 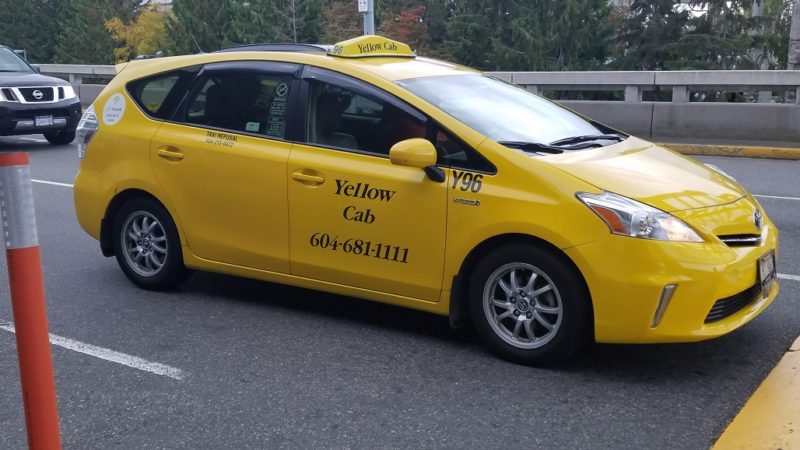 Bike Trails Galore, and, Better Yet, They Bring You to Vancouver’s Beaches!

Vancouver, BC is simultaneously cosmopolitan and down to earth.  This can be said of other cities in the Pacific Northwest as well.  Well, part of the down to earth quality means having a lot of outdoorsy type folk.  While we didn’t get to North Vancouver and Whistler for some hardcore hiking, we did take full advantage of the bike trails in and around Stanley Park, Kitsilano, and the University.  The fact that we were blessed with glorious weather only helped boost the experience.

I am keeping this brief, since I wrote a more in depth article about biking in Vancouver.  But do me a favor, or better yet, do yourself a favor.  Get pedaling and of course take time to sit on the beaches and drink in the stupendous views.

Being a foodie, I thoroughly researched restaurants in the weeks before my trip.  Food blogs, TripAdvisor, and a couple of guidebooks, as well as personal recommendations from friends who have been to Vancouver.

There were certain restaurants that came up time and time again and I did my best to hit at least a couple of them.  My trip was five days, so I could not hit them all.

But I sure am happy I made it my business to get to Bao Bei. Many of the ingredients are local and organic.  And that cannot be said for many Chinese restaurants.  They don’t take reservations.  If you don’t get there at least 20 minutes before, they open, you won’t get a seat.  This fact alone says I am not the only one enthralled with this hipster, Chinese fusion restaurant.

Some of the Best Pickle’s I’ve Ever Tasted

Each mouthful packed a flavorful punch.  House made assorted pickles such as rainbow colored beets and carrots was the perfect appetizer.  The sour may be needed to cut some of the richness of the irresistible crispy pork belly.  I respect any chef who can properly caramelize the fat on pork belly, so I can just feel it melt in my mouth.

We ordered six dishes to share, tapas style.  Each and every dish received two thumbs up, with no one clear winner that emerged.  We were impressed with the bold use of spices.  Lots of coriander on stir fried cabbage can transform the humble vegetable.

Since the dumplings are made every night in house, I put them on the must try list.  You haven’t tasted dumplings until you have Helen’s homemade ones!

The service was quick and attentive, yet unrushed.  The décor was stylish and modern as you might expect for a self-described Chinese brasserie.  The food was inventive and creative, while still being casual.  It was the perfect dinner experience in Chinatown!

A tavern that just feels like a slice of Vancouver, BC anyway you cut it.  That being said, the Alibi Room could fit in very well in Portland or Amsterdam.  It is housed in a historic building next to the railyard in Gastown.  Walk inside the dimly lit building and you will either be elated or overwhelmed at the selection of craft beers.  Over 50 rotating brews on tap, many of which are from BC.  Although they feature some imports as well as a modest selection of wine and cocktails.

Since Dan and I are modest drinkers, we opted for a tasting flight of four.  Our selection spanned the variety of what was available.  And the shades of colors were an artists’ palette of earth tones.  Our taste buds were dancing with notes from the spruce tip beer, a not so sweet raspberry beer, an apricot sour, and an espresso stout. 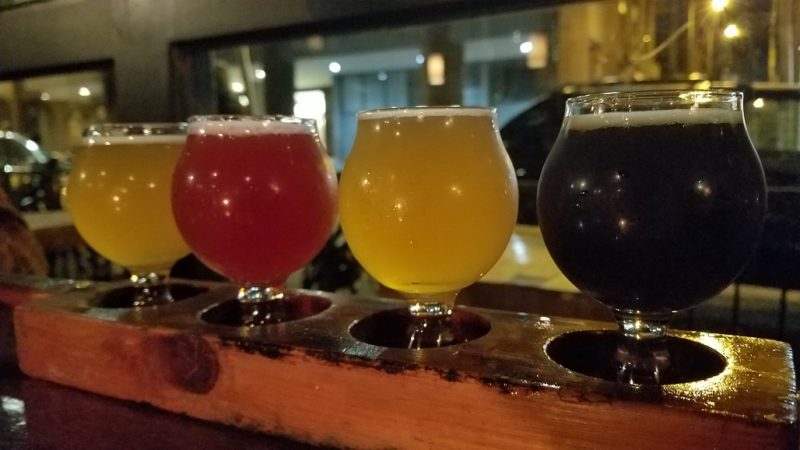 The Alibi serves pub food as well.  Since we had already had dinner, we skipped the meal and went straight for dessert.  Which happened to be a platter with three mini desserts, all of which incorporated alcohol into them.  Irish stout ice cream and bourbon cheesecake anyone? 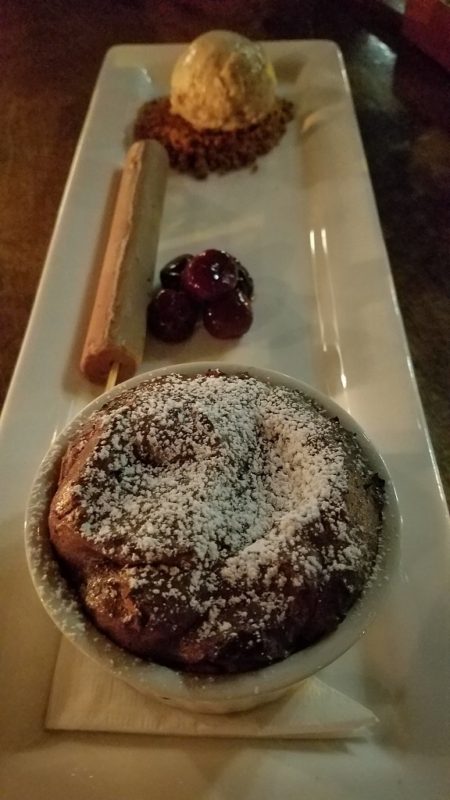 It would be no problem to go back to the Alibi Room a few times a month and never repeat anything.  Throwing in that they rotate what is available on tap ensures you don’t need to repeat unless you want to.  The craft beer is notable, the ambiance is very befitting for Vancouver, and the people are friendly.  What else do you need?

If you have some of your own top 5 things to do in Vancouver, let me know.  I am always looking for more gems!