One of Many Remarkable Tile Facades

Oct. 13:  Dan and I are back from our final walk to Rossio and it’s after 1am.  We started our day in an easy going fashion, because what the heck – we are on vacation after all.  Blogging at a café and watching the world go by is a very European way of passing the time.

When we were on the streetcar yesterday, Dan had noticed a large market hall not far from our hotel.  It turned out it was the Mercado do Ribeira.  Time Out, the well-known publishing company took over the historic market and revived the fruit and veggie market.  They also created a food hall with 24 restaurants, eight bars, a dozen or so shops and a music venue.

The farmer’s market component was winding down by the time we arrived.  It seemed like a lot of the produce was direct from the farmer, although some of it was obviously imported.  Lots of cured olives!

Bacalhau Is Added to Many Dishes 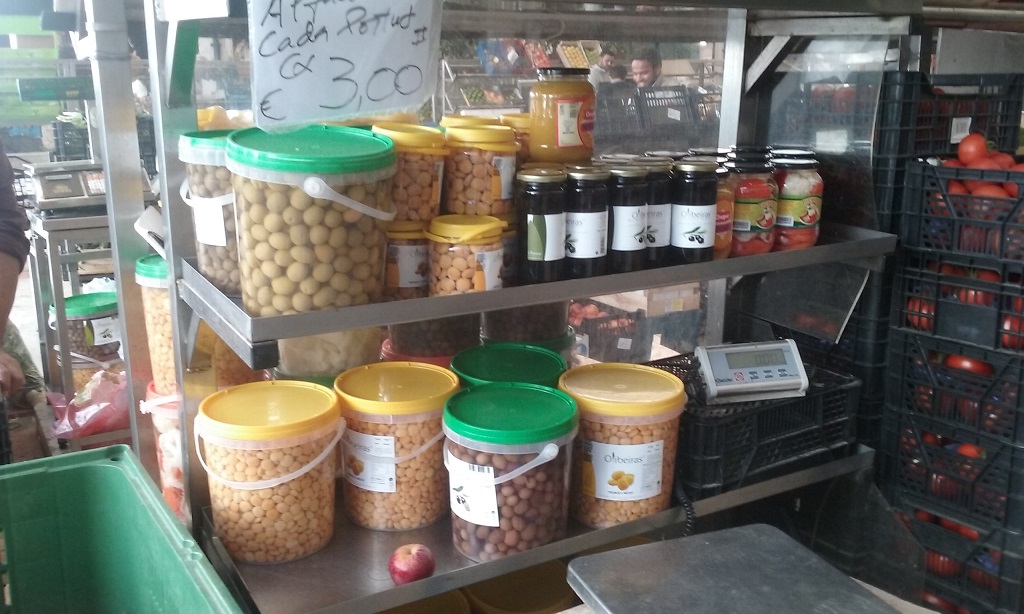 Olives Are Served Everywhere As Well

The Mercado do Ribeira food hall was a hubbub of activity even at 2:30 pm.  It’s anyone’s guess, but there were easily more than 1000 people in there chowing down.  We were lucky to find two seats next to each other on the long wooden tables that ran the distance of the large room.  The scene was Babel revisited.  We heard multiple languages being spoken.  Some were the more common one, and a couple we could not recognize.  It showed what an international destination Lisbon is.  Especially considering it is a relatively small city, 550,000 people (2.8 million people in greater Lisbon). 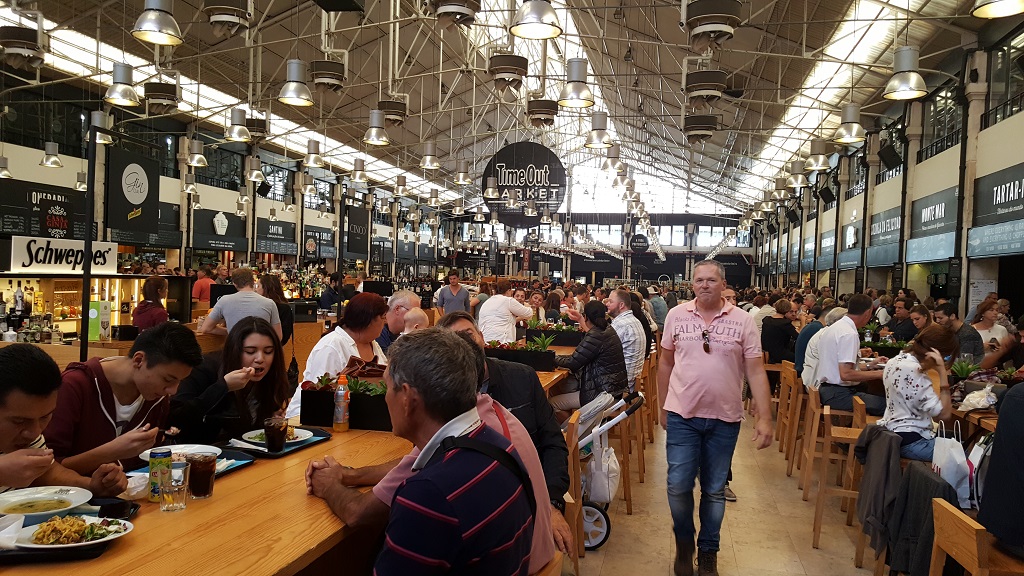 Packed to the Gills, the TimeOut Market

I spotted a store that I knew about from my research pre-trip.  It was A Vida Portguesa (A Portuguese Life).  Catarina Porta has collected handmade items from artists and food producers throughout the country and she has three stores in Lisbon.  We were very much aligned with this business model supporting local art and agriculture.  After checking out the store in the Mercado and agreeing that the items were all lovely, we decided to stick with our original plan of visiting the larger main store to have more beautiful items to look at.

We took the subway to the Interdente neighborhood, which once there, we realized happened to be near Cooking Lisbon.  It’s a neighborhood where the everyday Lisbon people live and work.  Interdente is not all dolled up like Rossio and Chiado. My belief is that every visit to a city should include a walk in this type of neighborhood.  We spotted murals wrapping around old tiled buildings and heard music drifting out of local hole in the wall restaurants.  Tucked away under an arch was the shop and, just as we thought, it was filled with delectable food items and more beautiful crafts than we could imagine.  I constrained myself to some flavored salts and colored pencils and Madeira wine.  My suitcase is only so big after all. 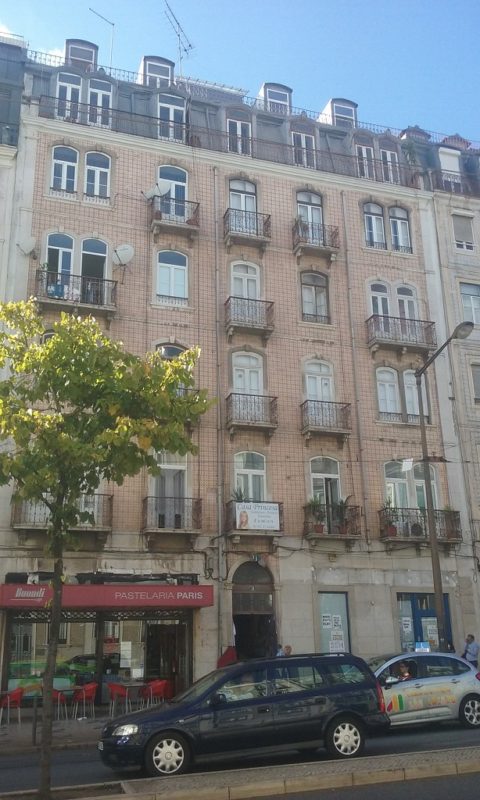 The Interdente Neighborhood Is Less Touristed

From the shop, we caught the subway to the train station on the outskirts of town to pick up our rental car, knowing we’d need it come tomorrow morning.  On the way back to the pousada Miss Google got us turned around and ended up wasting a lot of our time with her silly directions.  Practical lesson:  never trust Miss Google 100%!  But we will admit that she is usually a heck of a lot more efficient that navigating with hard copy maps.

Eventually we did get home and we immediately headed out for brisk walk to clear our frustration. And then I pumped it fast and furious at the gym and that seemed to burn up whatever frustration remained.  This time, it was a woman from Switzerland who asked me about Donald Trump.  Clearly the Europeans know more about American politics than we know about theirs, or our own, for that matter. 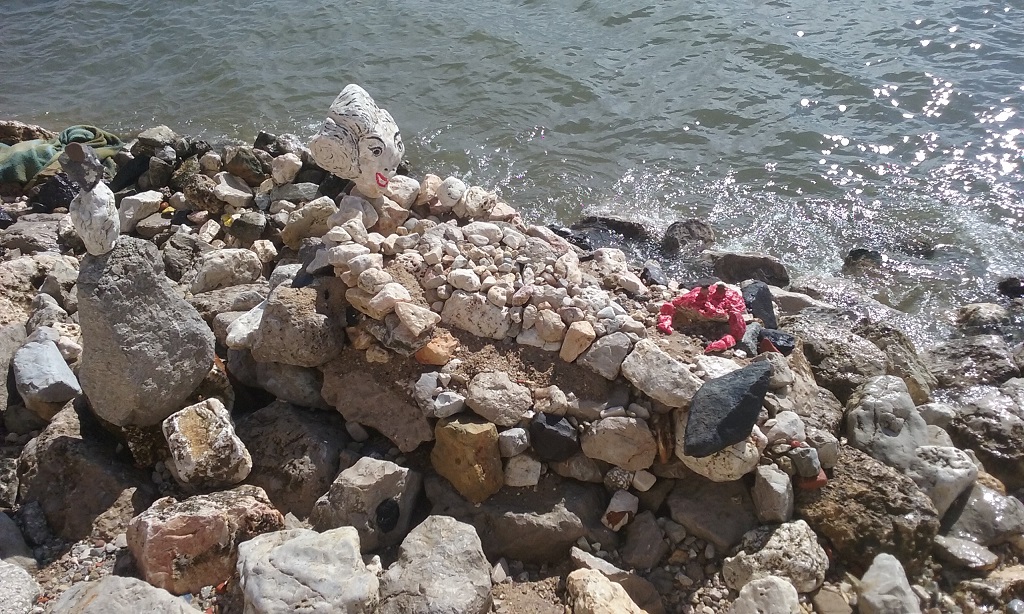 A Walk Brought Us Past a Rocky Mermaid

When I googled where we were eating dinner, I realized we would have to take a cab, since it was near Torre de Belém.  Dan took the opportunity to get the cabbie’s perspective on the taxi strike on the day we arrived.  The taxi driver was a very articulate and intelligent man who gave us a thoughtful and complete overview of Lisbon taxi law and culture.  It turns out that our taxi driver thought that it was really the taxi owner strike.

The owners rent their cars to drivers.  If Uber is allowed, the taxicabs will be worth less to patrons so the owners encouraged the strike.  In the light of this, we asked why the taxi drivers would strike, he told us that a lot of them are older, have been driving for years and are not the type to switch gears to Uber at this point in their lives.  For him, he acknowledged that Uber is the wave of the future and maybe someday he’ll be in that flow.  But for the time being he was staying put.

I know it seems amazing that we covered so many bases in a 20 minute car ride, but he also brought up the Donald Trump situation.  I know it’s only four people, but four people from four different countries in two days have all expressed to me that Trump is a crazy man and dangerous to the world and they don’t even understand how he got nominated for the position.

The cabbie tied this observation to saying that although the Portuguese don’t like Trump, that in general, they turn to the west (US) and not the east (Europe) for cultural input and inspiration.  They are particularly interested in what the United States has to offer in music and film.  He cited the 25 de Abril Bridge as an example of this mentality as well.  “Our bridge looks exactly like the one in San Francisco.  This is not a mistake” he told us.

We were greeted and seated at Feitoria, a Michelin*  restaurant.  The food was excellent and some of the presentations were over the top cool and unique.  The amuse bouche was served in metal trees and giant oyster shells.  And the scarlet shrimp broth was actually made in part, at our table.  A very heavy metal press was brought out and the waiter squeezed the shrimp heads until scarlet juice came out the chute into a mini-copper pan.  The juice was taken back to the kitchen, where it was transformed into a French sauce.  It was then brought back to the table in a tiny copper pot and served dramatically. 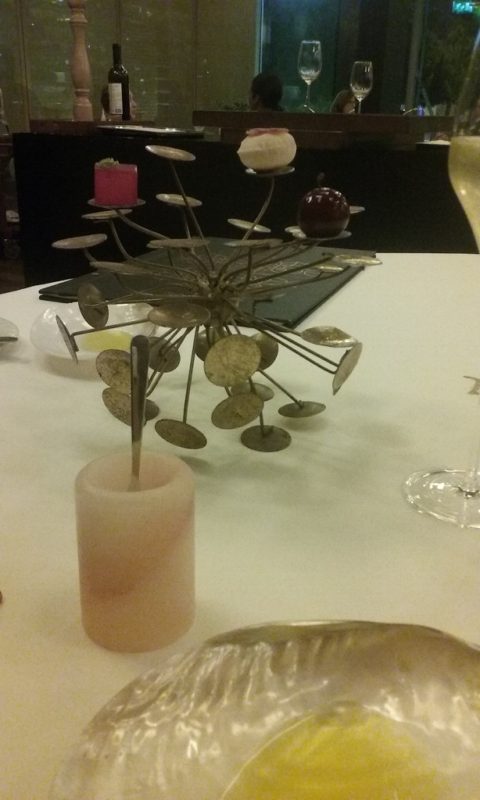 Shortly after we arrived, a couple from California sat down at the table next to us.  As the server went through the menu, both people, but particularly the man started interrogating the waiter about each individual dish.  He emphatically and sternly informed the server he could not have anything with dairy in it.  Then he went over each dish, and what was in it and what he wanted it to be like – removing components and adding in other ingredients.  For example, the beetroot salad would have no yogurt dressing and he would not touch foie gras.

Now mind you, this is a fixed menu.  We immediately started wondering, if one’s diet is so completely unaligned with what the chef is offering, why bother going to the restaurant in the first place.  Besides his endless deconstructing of the chef’s creations, when each dish would come out and the server would specifically explain what he was given, he double checked to make sure that it contained no this or that.  Dan and I listened intently, just because the whole scene was hysterical.

About halfway through the meal we noticed a lively conversation was being conducted across the room between a French couple and another couple, who were gay in both senses of the word.  They were completely jolly and they were totally affectionate with each other.  They both had very fancy Van Dyke beards, which were humorous in and of themselves.  When one got on his knees in front of the other as if to make a marriage proposal, the French woman egged them on.

Their antics went on for quite some time and they really stole the show.  Almost to the degree of the meal not getting the attention it deserved from the staff.  It seemed like everyone found them amusing.  Unfortunately, the service seemed to unravel once the antics were in full swing.  On the other hand, maybe the kitchen was just too busy deconstructing the dishes for the California couple and it slowed service for everyone else. 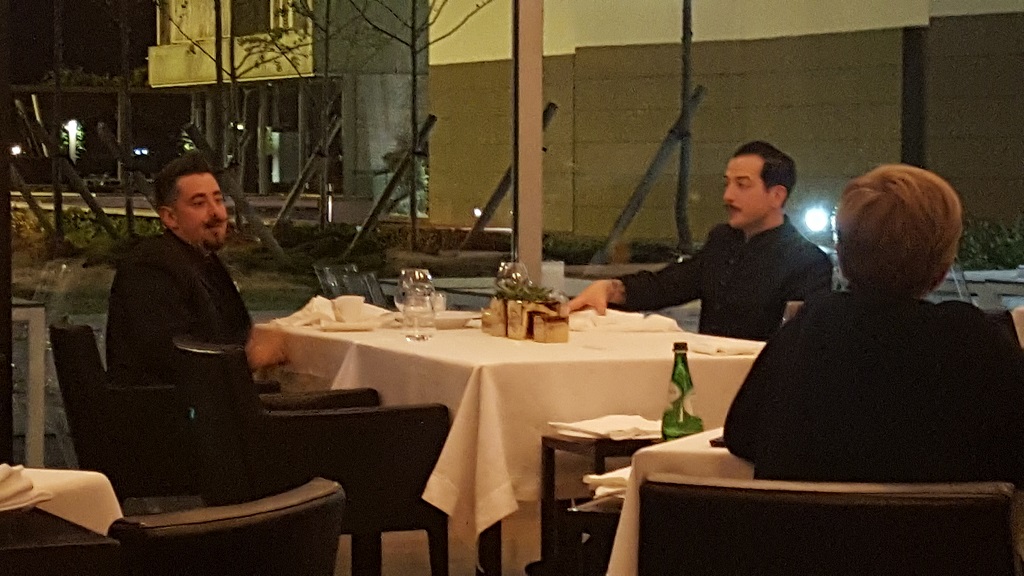 These Two Gents Were Turning the Restaurant into a Circus

The finale to the meal, which as far as we could tell brought out the inner-child of every patron, is worth a special mention.  The server came out with a crock that was vaporizing from dry ice.  Inside of it were bite sized meringues.  We were each given one.  When we popped it in our mouth and started exhaling, vapor shot out of our mouths as if we were smoking.  The talented patrons even got it to shoot out of their nose.

All in all, the meal was tasty but the service was too slow, even considering the context of haute cuisine.

The meal also made us notice for the third time the use of “tricky” presentations in Portuguese haute cuisine.  At 100 Maneiras, Belcanto, and at Feitoria, we were served food hanging from “clothes lines”; encased in “rocks”; and stashed in metal “trees”, just to name a few of the “tricky” presentations.  I think we noticed it, since such presentations are used much less frequently in French haute cuisine.  I am not sure what the reasoning is behind this, but it is creative and adds a note of whimsy to the experience.

We caught a cab back to the pousada and took our final late night walk to Praça do Rossio where I demonstrated some shenanigans that had Dan and other passerbyers in stitches.  Click here to see the video and let me know if it has you rolling over in laughter too.

This was the first night that we got home so late that even the bar had shut down and we were unable to get hot water for our nightly tea ritual.  Well after 1am, it was time to say goodnight, because tomorrow we are Alentejo bound.

The Arco at Night 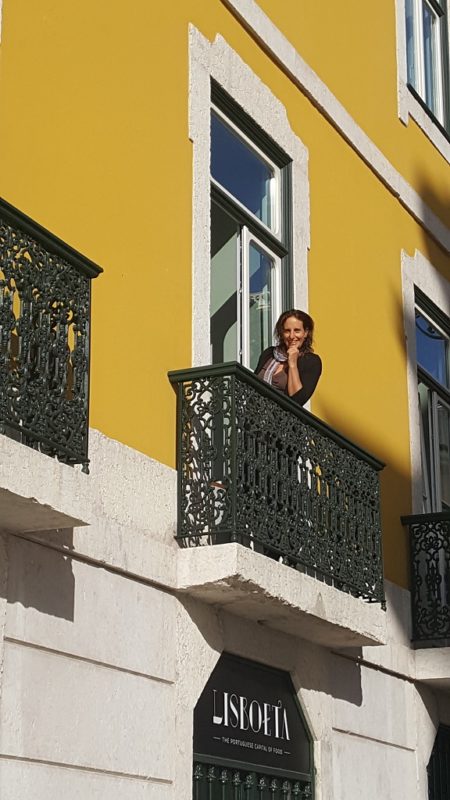