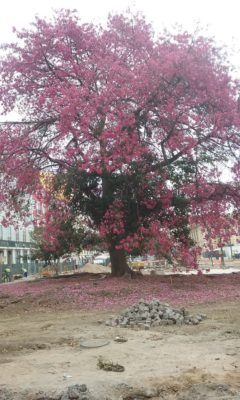 We Admired This Tree Every Day

Oct. 12:  We are having our ritual late night tea at the pousada, recounting the fun we’ve had traipsing around Lisbon.  Almost every picture depicted of Lisbon features Belém and so it certainly made it our must do list.  It’s a bit out of town, but again, it has some very key sights that any visit to Lisbon should include.  Dan checked out the best public transportation route and we opted to take the streetcars.  We checked with the hotel concierge and she agreed and pointed us in the direction to get our tickets.  She mentioned we should get a one day pass so that we could ride any form of public transit all day.  She took the extra effort to explain that it was six euro, which meant twelve euro for the two of us but, as she explained, we would get our moneys’ worth after two rides.

Now this is something we have noticed happens frequently in Portugal.  They are very focused on making sure you understand what things cost and what you get for that price.  Sometimes they want to double check that you really grok that room service will cost two euro.  They explain and reiterate another couple times.  This is completely different from France, which often has no price tags on items or even a menu.  And getting a couple jars of mustard or a couple samples of tea, you get a surprise when they tell you that it will be 60 euro.  The Portuguese don’t seem cheap, but just very concerned about full disclosure.

Anyway, we were waiting for the street car and it came and some people boarded.  However before even all the seats were filled, they shut the doors and carried on, leaving dozens of people waiting.  The next car came with its seats mostly already filled, but everyone squeezed in like sardines in a can.  This is Portugal after all!

Reaching almost Tokyo levels of compression and being held in place by the masses of our neighbors, we headed west.   On our way we passed right by the Ponte 25 de Abril, the bridge that we had seen from the Praço do Comércio that bears an uncanny resemblance to the Golden Gate Bridge in San Francisco.

As it turns out, although it looks like the Golden Gate, structurally it is more closely related to the San Francisco-Oakland Bridge.  Not as romantic, but I guess that is the engineering truth.  In any case, it was built by the same folks who built the Bay Area bridges and has the same design features to protect against extreme seismic activity like piers that go down 100’s of feet into solid bed rock.  In one of those twists of history, it was built in 1966 and named after the dictator.  However, after the dictatorship fell, the name was changed to Ponte 25 de Abril, commemorating the date the dictatorship fell in 1974.

Shortly after passing the bridge we made it to the Torre de Belém , one of the iconic Lisbon landmarks .  It is a stone tower on the Tagus River that was built in the 1500’s as a defensive point to protect the city of Lisbon, which is seven kilometers west.  However, it relatively quickly outlived its usefulness as a defensive point and was converted to a prison.  The tiny, low ceiled windowless rooms in the bottom of the tower, certainly must have achieved the objective of making the lives of political prisoners miserable.  Since we had had great views from the ramparts, we decided to carry on and avoid the long lines to get to the top of tower.

The Torre de Belém Dates Back to the Age of Discovery

From the tower we went back towards the city to the Jeronimos Monastery.  When we had passed going to the tower, we had been liberated from our sardine packing when the great mass of people made their exodus.  On our return, although we did not understand why, there were relatively few people around.

The monastery is another iconic Lisbon landmark.  Yes, there are plenty of them! King Manueline built it in the 1500’s and it typifies the stunning Manueline architecture.  Prior to King Manuel who reigned from 1495 to 1521, Portugal did not have a unique architecture, but imported it styles from Europe.  However, all this changed with the development of the Manueline style.  It was a clearly Portuguese expression of national style as well as an expression of the confidence that came with the Age of Discovery.  Twisted ropes, coral like structures, knots, and shells became symphonies of artistic expression in carved stone.  The knots, coral, and shells calling out the seafaring base of the Age of Discovery. Romanesque and Gothic structures were transformed with the lace-like Manueline embellishments.  This transformation was very obvious to us in the Monastery.

Here Are a Few Pictures of Manueline Architecture 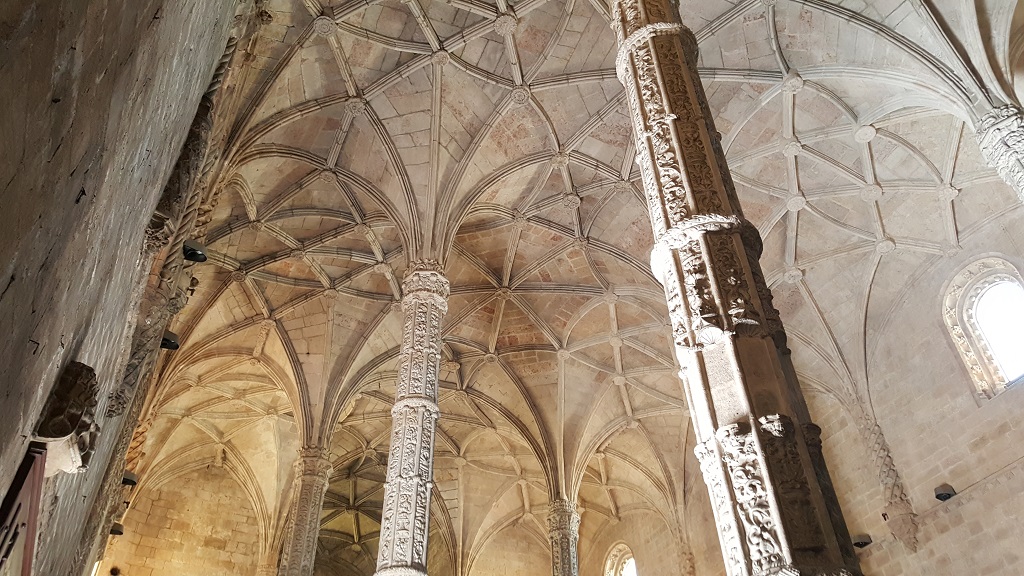 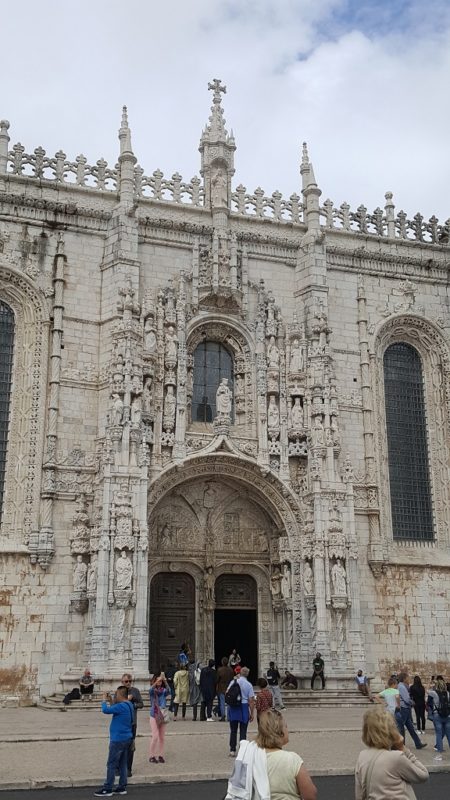 The Ornate Entryway to Jeronimos Monastery

The decorations on the columns in the church were like nothing we had ever seen before.  Every inch of surface was ornately carved.  In addition to being the final resting place for the Manueline royalty, the church also housed the tomb of Vasco deaGama.  It was interesting to us that Luís de Camões, the famous poet who wrote about Vasco Da Gama occupied a similarly prestigious niche in the church.  This reflects both the love of literature and the importance of the Age of Discovery to the Portuguese people.

Vasco de Gama’s Tomb Is Quite the Spectacle

My prior research found a pasteleria nearby that was the original for pastel de nata, which is the national dessert of Portugal.  It’s essentially a cup made of flaky phyllo dough that houses a rich, egg custard.  Anyway, Dan had sampled ones in Lisbon a couple days ago and he wanted to try the “original”.   So we dove into the crowds at Pastéis de Belém who were jostling for their treats.  We survived and Dan confirmed what I had read, that this place is the real deal. 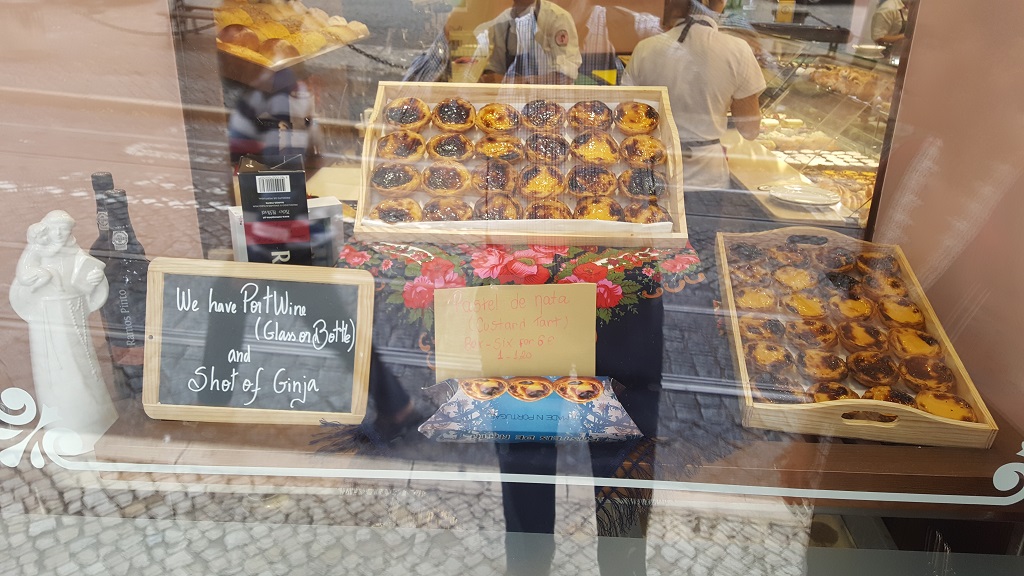 A street sign directing us up a hill to the Tropical Gardens seemed like a good way to balance the heavily touristed places we had just come from, as well as throw a dash of spontaneity into the afternoon so we followed the sign.  Portugal has a Mediterranean climate and I can see how some tropical plants could survive here, even if they don’t thrive.  We wandered in no particular pattern.  And when it started raining on us and we joked that we were in a tropical storm.  Seeing rows of palm trees juxtaposed with flocks of ducks and classic statues, really gave us a chuckle. 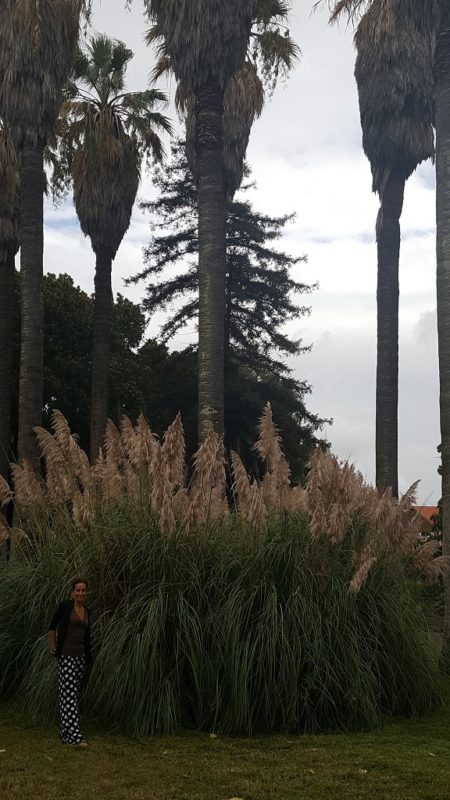 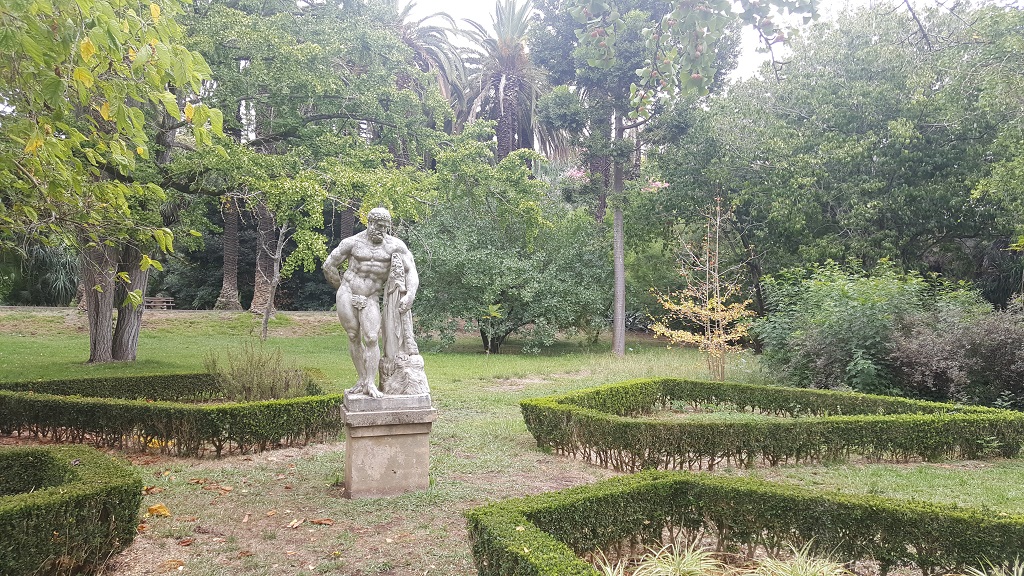 I Had Never Considered Classic Statues in Tropical Botanic Gardens

We took the streetcar back to the hotel to recharge, knowing we’d have a late night ahead of us.  The pool and sauna really helped the rejuvenation.

A few months ago, I suggested we do a cooking class in Lisbon to get a feel for Portuguese cuisine.  Dan thought it sounded fun as well.  And a google search yielded an English speaking cooking school, Cooking Lisbon.  The cab dropped us off and we went in and started talking with the owner Luis.  Luis is the entrepreneur, although he is not the chef.  He and his partner studied the cooking school business carefully including a field trip to a successful one in Barcelona.  They have developed a very effective and enjoyable program and from what we gathered, they are busy with classes every day.  Luis takes a lot of pride in the work he has done and he has many pleased clients, including us. 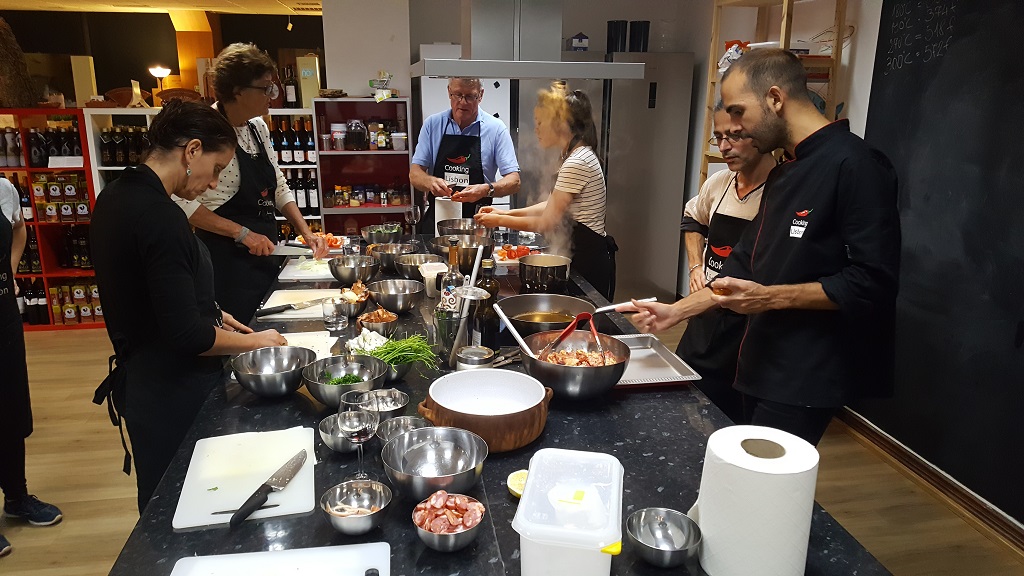 We Loved the Idea of Combining Dinner with Cooking

Goncalo was the chef and once we all arrived and got acquainted over some cheese, sausage, and wine complete with olive oil tasting, he got us to our stations and we were off.  We made a traditional chicken stew with carrots, onions and tomatoes.  One cooking technique I learned was to fry the chicken quickly to caramelize the skin.  The inside is still raw, but sealed and it maintains its juices when it further cooks in the oven.  He threw a little heat in with piri piri, the national hot sauce.

Dan and I were in charge of cooking the Bacalhau à Bràs, which is one of the many ways codfish is eaten in Portugal.  On its own, codfish has a plain flavor, so it’s often used in conjunction to give other dishes some protein, while taking on the flavors of the individual dish.  This dish was mixture of onions, codfish, matchstick fried potatoes, and egg.  We plated it nicely and it was garnished with olives, parsley, and balsamic vinegar.  At home I am the antithesis of a food plater.  Too busy!  But tonight, it was lot of fun to invest just a few more moments and transform a pot of food into something elegant.

Bacalhau à Bràs Can Be Made Rustic or Fancy

I was really happy that we were not put on dessert, since I am a cook, not a baker.  A few participants painstakingly shaped the low sugar meringue into mini-footballs and cooked it on low heat in milk for about five minutes.  The egg yolks were made into a custard in which the meringues were floated.  Goncalo mentioned it was similar to the French dessert The Floating Island.  We had seen it on most menus in Lyon.

The Portuguese Version of the French Floating Island

We all dined at the long table and it was quite a convivial group.  We got to know the French man who lives in New York, a bit better. And we heard tales from the Australian couple who just walked the Santiago Trail across northern Spain.  Luis would have let Dan and I stay even longer, but with it already being 10:30pm, and us having a whole other event planned, we said our goodbyes.

On our cab ride we got to wondering why dried, salted cod was so popular in Portugal when they have access to an abundance of fresh seafood.  It is even more mystifying when we realized that the cod comes great distances from the North Atlantic.  As we bantered back-and-forth we decided that it was another of those things that trace back 500 years to the Age of Discovery.  When the Portuguese explorers started ranging far and wide on the globe, they came upon abundant stocks of cod.  Of course the only way to preserve it in those days and bring it home was to dry and salt it.  So there you have it!  We never scientifically verified it, since our cab had arrived in the Alfama.  But we like the theory.  It’s just one of many examples of the kind of conversations we indulge as we explore the world.

We were back in the Alfama at Club Fado.  We called yesterday and found out we didn’t need reservations, unlike a lot of other places.  Although we were correctly informed about not needing reservations, it didn’t mean we could get a seat.  As we quickly discovered.  We were directed upstairs to the waiting area, which had thirteen people in front of us.  We could hear the fado music downstairs, but barely.  And after we waited 20 minutes and not one of the thirteen people had been admitted yet, we decided to listen to some fado music at home.  And so it was us and Amália Rodrigues hanging out at the pousada at our private little tea party.