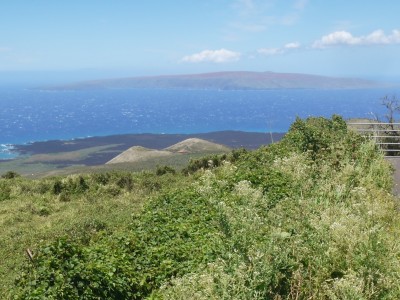 Kaho’olawe as Seen from the Pilani Highway

It’s 9:30 at night and I am at Hosmer’s Grove, 12 miles south of the summit of Haleakala. I want to get to bed not too late, since I am getting up at 3am for what will hopefully be a monumental event.

I woke up at Cafe Attitude and the rain was coming down something fierce. As much as I wanted to hike around Ohe’o’Gulch, I was not into being drenched and so I decided to head west and go all the way around the island. I said a silent prayer to the land I was on and headed out.

A few miles west of Kipahulu – the terrain started to change and become more rugged, although it was still raining there in a big way as well. But the greens of every shade were being replaced by the beiges and earth tones. I have seen similar landscapes in the high plains, but this scenery, juxtaposed with the ocean was new to me. And very striking indeed. I saw wind power being generated there. The views of Kaho’olawe, an offshore island were worthy of stopping on the narrow road and snapping some pictures of, in hopes that no cars would need to pass me. I think this was just an exceptionally rainy day, as this is the dry, desert part of the island, but the rain was still coming down in buckets, with occasional breaks of sun. C’est la vie! 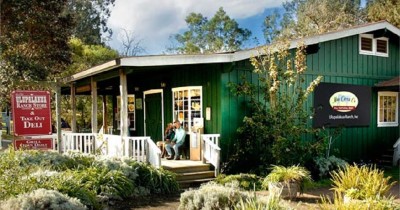 At some point, the road heading west turned north, to head upcountry and the land was lusher again. I pulled over at Ulupalakua Ranch, as I had read about their elk burgers and I am always up for trying new foods. It hit the spot and I left feeling satiated and grounded. I also stocked up on some small gifts to share with friends when I return – mustards and jams and salts, in different flavors.

Now, before I continue on the road, I have to take a moment to note that the idea of driving the back way to get upcountry elicits all sorts of warnings in the guidebooks – explaining how there are no services, how remote it is, yada yada. This is true, but it’s only for something like 20 miles, even if it does take an hour to drive through. The same sort of landscape is pervasive in states west of the Mississippi. As in, you Hawaiians need to get off the island and drive around Wyoming, Colorado, Eastern Washington – and then you can adequately speak about remote. Good grief!

I decided to spend the day exploring upcountry, since there was no hope for me to work on my tan today. Working south, I hit different farms and gardens and cute towns.

Kula Botanical Garden was a delight for the senses. The plants are ornamental in nature, although I am sure there is lots of medicine in there, should one invest some time in digging a little deeper. I had never seen or heard of most of the plants. And there were too many for me to contemplate delving into to learn about, but I sure did enjoy all the colors and textures and such. They had a garden area, just for Tabu plants, plants that are strong enough to hurt you. Now this got my attention. Plants that are strong in this way tend to evoke strong emotions in people. 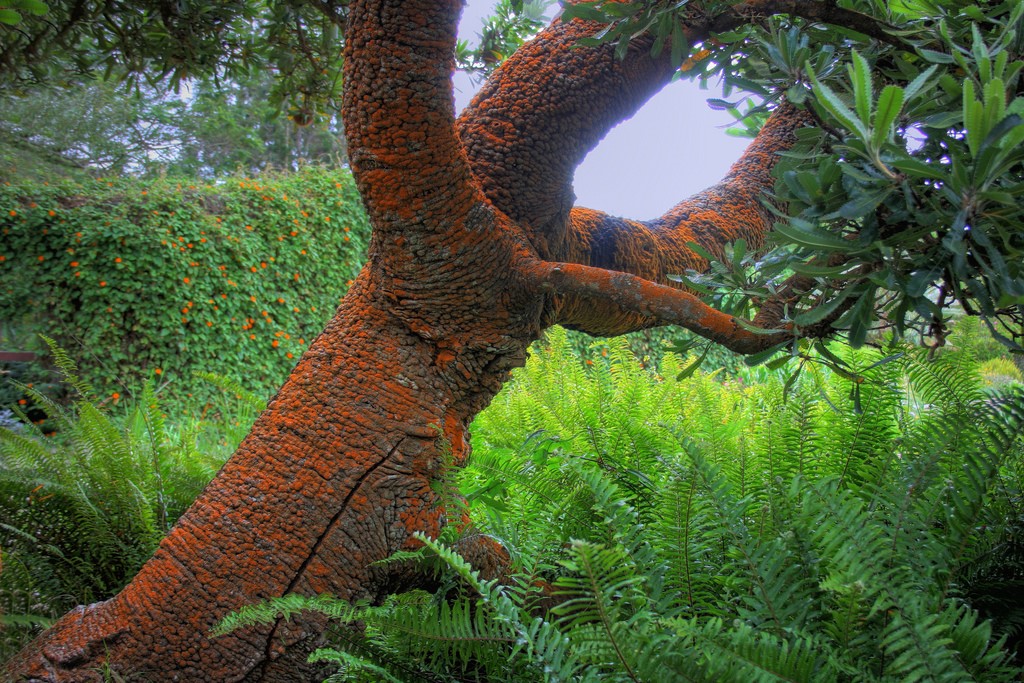 A couple of miles away, I went to Ali’i Kula Lavender Garden. I was hoping that the lavender would be in full bloom, as it blooms in June in the temperate regions. But it was not, so my idea of being telepathically transported to Provence didn’t exactly play out. I still very much enjoyed strolling around the lavender fields and taking note of the different varieties. There was a gift shop which featured all sorts of things influenced by lavender. I settled on getting some lavender sweet potato chips, as that is something I had not tried before. My personal favorite thing to do with lavender is make lavender crème brûlée. You haven’t lived fully, until you have indulged. 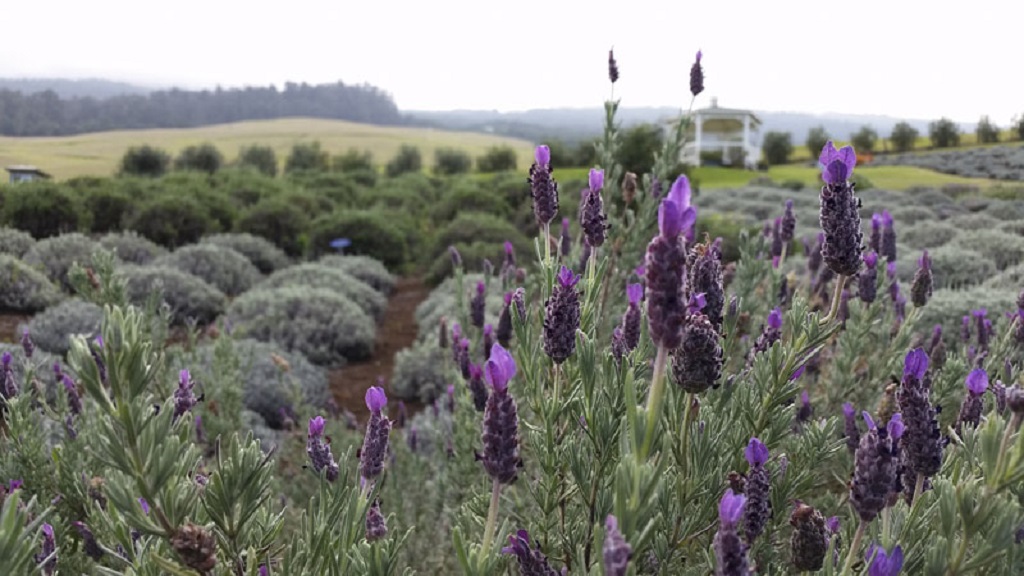 Heading north, I hit Surfing Dairy Goat Farm, owned by a couple who came over from Germany, at first as tourists and then they decided to relocate in Maui. How sweet, seeing the baby goats playing. It doesn’t get much cuter than that! This was probably a place best suited for taking kids and doing a tour, but I strolled around a bit and then went into the gift shop. I treated myself to two truffles made with goat cheese, and a small container of mango chutney chèvre. Both of these became a historical fact by the time I reached my car. 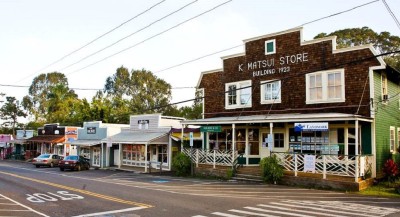 I hit the town of Makawao next. What a sweet little place. It seems like it used to be cowboy land, as the buildings have that Wild West feel to them. Although it’s been reimagined as an artist’s community now. Old buildings have been remodeled to be art galleries and local eateries. With the weather being what it was, I took this time to be inside, and treat myself to a mani/pedi. My hands and feet really did need some TLC. They needed it before I left home and were now screaming for some hot water soaks, massage, and moisturizing. I was the only woman in the salon and the owner and nail technician and I chatted with ease the whole time.

The day seemed to slip by and at this point, I was hungry. I went to the town of Hali’imaile, if you could even call it a town, a couple miles up the road. The Hali’imaile General Store has been turned into a farm to table restaurant. The chef was actually one of the pioneers of this movement in Maui, so this alone, warranted a visit from me. The restaurant maintained the character of the good old days, yet was clean and comfortable and made for a very nice casual setting for dining. I had an arugula goat cheese salad with a mango puree and champagne truffle vinaigrette and a sashimi salad, made with ahi, smoked salmon, and raw salmon with a wasabi dressing. It totally hit the spot. Simple, well prepared, nourishing, local food prepared with knowledge and love – I am all about it.

I did a food stop in Pa’ia, knowing I’d be up on the mountain all day tomorrow and headed uphill again, to Hosmer’s Grove. It’s a campsite at about 6500 ft. The temperature was 55 degrees, which I am pretty used to for night time. There were other campers hanging out and chatting. I joined them and we chatted casually about our adventures. Everyone was excited to go see the sunrise the next day and knowing we were going to get up at 3am, it was best to make it an early night.

I want to partake in stargazing, so I don’t even sleep inside the tent. I lay my sleeping pad on the ground so I can watch the galaxies shift above me as I drift off to sleep. 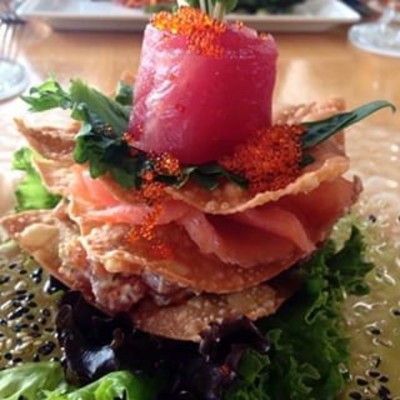