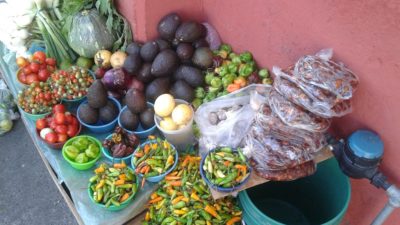 An Array of Traditional Ingredients for Mexican Cuisine

For me, eating is always a huge part of travel or life for that matter.  It is very important to me to connect with the people serving fresh and local food.  Whether one is traveling on a budget or traveling in luxury, they can (and should, IMHO) make a point of sampling the local cuisine.Terroir is a French concept, but it can be applied to any region.  Zihuatanejo’s tropical climate yields the fruits common to those latitudes- coconuts, mangos, pineapple, and then some less common ones like jicama and guanábana.  And since it’s on the ocean, every day brings a delightful bounty of fresh fish.  There are certain plants we eat in temperate regions during the summer, like tomatoes and peppers, that parts of Mexico are blessed with growing year round.  Thus they have different types of salsas with varying degrees of heat that make for wonderful and traditional condiments.

One thing I located shortly after arriving was El Mercado Central Municipal– the Central Market.  I asked Christian, the man who owns the hotel I stayed at, where it was and headed out immediately.  El Mercado Central is almost always part of downtown and close to the water.  If you want a slice of authentic Mexican life, you need to shop at the market – it’s bustling with activity and is often noisy, sometimes chaotic and dependably intriguing.  Stalls lined the aisles, and seemed to be clustered according to what they sold.  Booths with plastic crap like sandals and backpacks were together.  Fish mongers were in another section.  The fish was out in the open, on ice, and it’s quite a sight to see little Mexican women skillfully wield a knife rapidly and with great precision.  I told a woman I wanted to make ceviche and she picked out two types of fish for me.   Produce vendors were abundant and while they overlapped with what they offered, each one may have had something special to serve a niche.  This one had squash blossoms, that one had green mangos, this one had fresh herbs, that one had peeled nopal (prickly pear cactus).  I selected a bit of this and a bit of that, knowing that I would craft ceviche (a raw fish dish), a cooked veggie dish, and a fruit dish.  As is typical of markets in developing nations, they do not have refrigeration.  I have gotten accustomed to this when traveling, but if you haven’t seen it, it’s sort of incredible seeing dozens of chickens with their necks still attached, just hanging over a counter – and it makes you wonder, “how long has the chicken been out like this?  Well, they all eat it and seem to be getting along just fine, so I can too.” 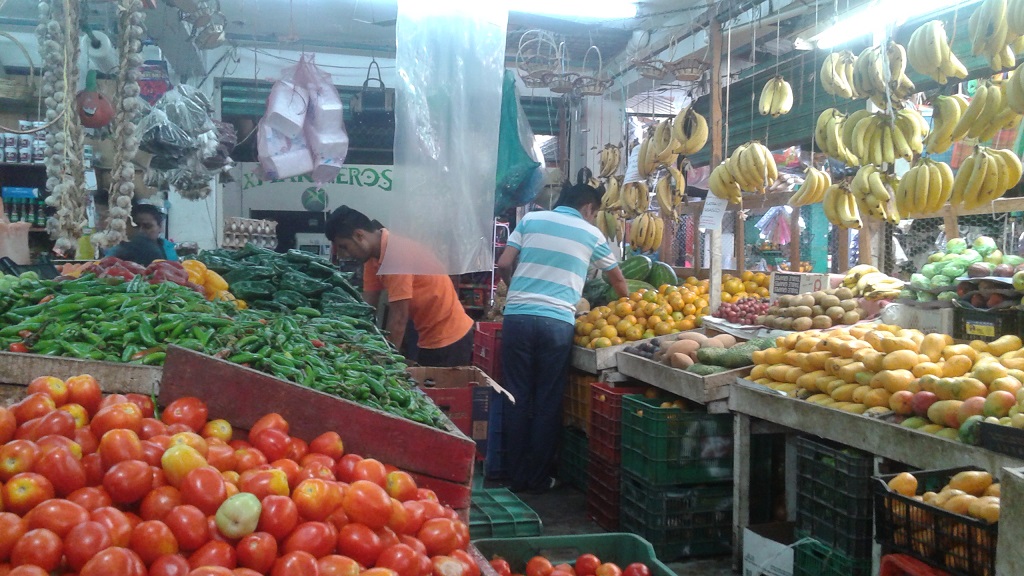 Exotic Fruits Are Commonplace and Abundant 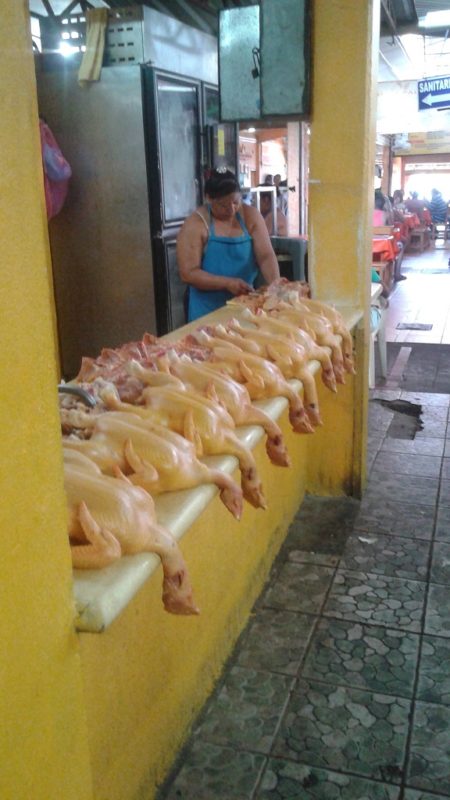 Enough to Make Amercans Freak, Yet People Seem to Get By Fine Without Refrigeration

At my hotel, I had a room with a kitchenette.  It was very modest, but truly it was a real bonus to be able to have a meal a day that I prepared, plus some fresh fruit for breakfast (fruit left out in the tropics rots very quickly).  Limes are a must when in Mexico, because all food is more nutritious, if it has been prepared with something acidic and in Mexico, limes are abundant and inexpensive.  I used lime juice to “cook” the ceviche.  It brightened the sautéed veggies.  And it gave a little kick to fresh watermelon and jicama salad.  Also, since I spent lots of time in the sun, it was important to boost vitamin C levels.  The Mexican’s call it limón verde.  It is green like a lime, not yellow like a lemon. 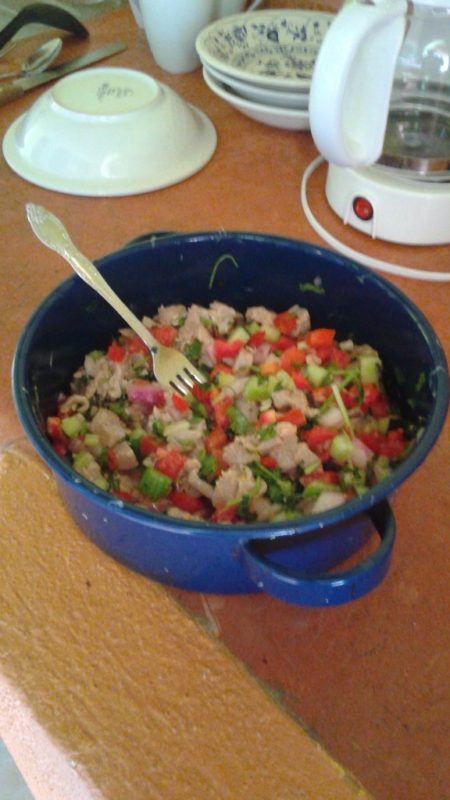 The Pescado Above Was Rapidly Transformed into Ceviche at Home

I ate quite a few meals on the go as well.  From food carts, to little hole-in-the-wall taquerias, to beachfront hotels that have their restaurant under palapas just yards from the ocean, to nicer establishments – I joyfully sampled it all.  What is so odd, is that there was no way to tell what would make for a great meal or one that was sorely lacking.  I had my best and my worst dining experience at beachfront restaurants, that looked similar, had similar menus, and similar prices.  Some that had English menus were good, others were not (generally a showy English menu in a non-English speaking town is a bad sign).  One place would serve stale corn chips, white bread with margarine, and pre-frozen broccoli, and the one a couple doors down would serve homemade corn chips, fresh tortillas, and fire roasted salsas with the catch of the day.

La Arena was located at the far end of Playa La Ropa and they served the tastiest meals I had my whole time there.  My first visit there I had atun con tamarindo (fresh tuna with tamarind sauce).  The tortillas were hot off the press!  And the grated beets, carrots and jicama accented the plate and the tamarind sauce to perfection.  I loved the smoky flavor of the salsas and I am happy to report that the chef spared no effort is preparing the food utilizing traditional methods.  The food had enough heat in it to feel it, but not too much to overpower it.  I went back a second time on my last day at Playa La Ropa and the fish was just as delicious, with a different preparation.  And the guacamole was chunky and made to order and very possibly habit forming.  Who doesn’t love fresh guac? 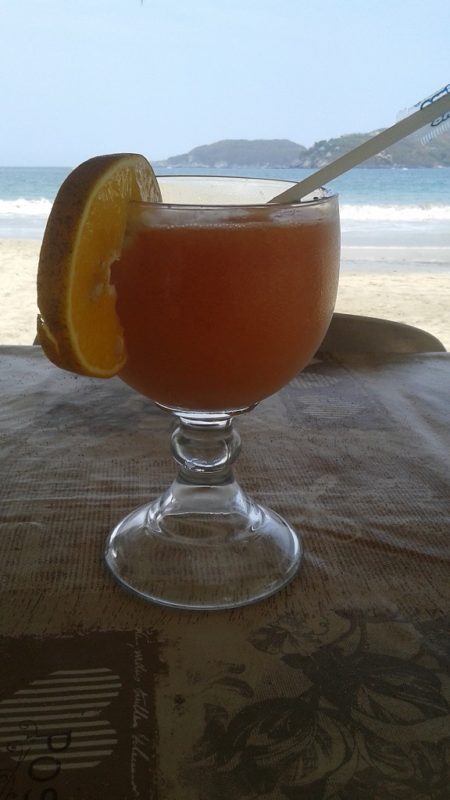 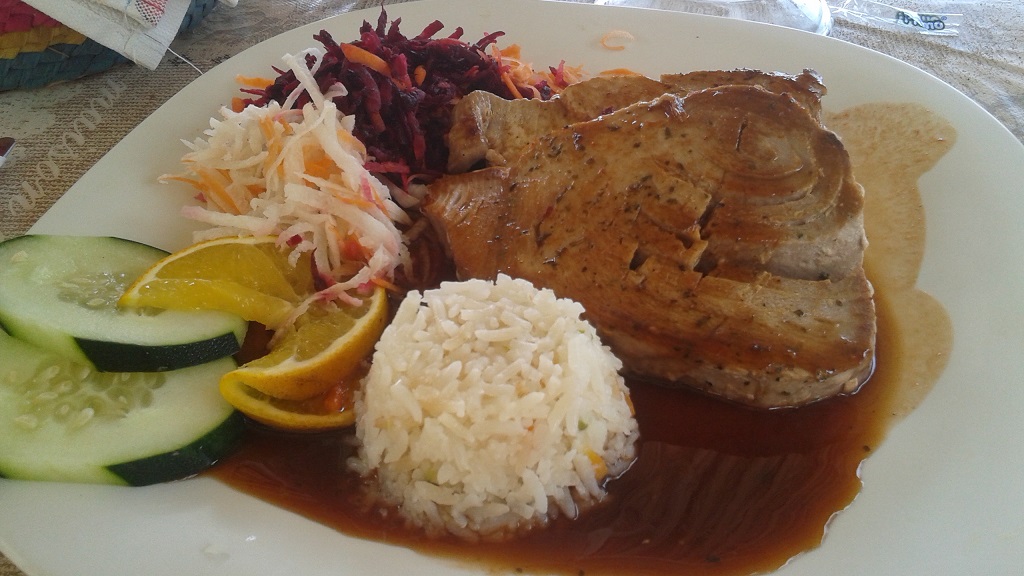 Casual Eating Under a Palapa Can Be Highly Satisfying

The service at La Arena was friendly and relaxed, as is commonplace in Mexico.  Both times I was there, a patron or a waiter took me in the back, near the kitchen, to show me the lagoon rich with crocodiles and iguanas and turtles.  It was like a zoo back there!  There was a wire fence and essentially we were standing about two feet from the crocodile who was chowing down on fish scraps that the staff tossed over the fence.  The waiter who took me back massaged the crocodile with a broom and he also used it to push him back into the water when the crocodile got too close to us.  The iguanas were up in the tree that hung over the lagoon.  They live on veggie scraps and it was very humorous to see iguanas crawling over each other to pick up tortillas and sliced tomatoes.  Then the little turtles wanted a piece of the action and they crawled on the crocodiles to reach the shore.  I asked if the turtles would get eaten by the crocodiles, and I was informed that el cocodrilo y la tortuga son amigos.  When I asked whether the crocodiles ever slide under the fence to where we were standing, I was told Si, es la casa del cocodrilo.  The locals understand that the restaurant is standing on the house of the crocodile and they respect that and act accordingly.  This worldview is fairly common amongst traditional people, at least more so than in the States. 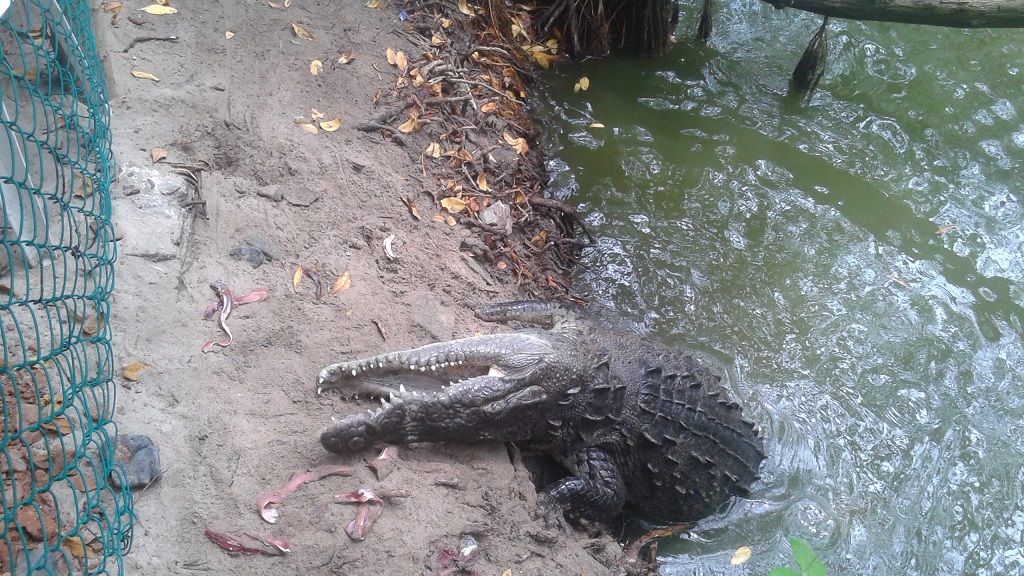 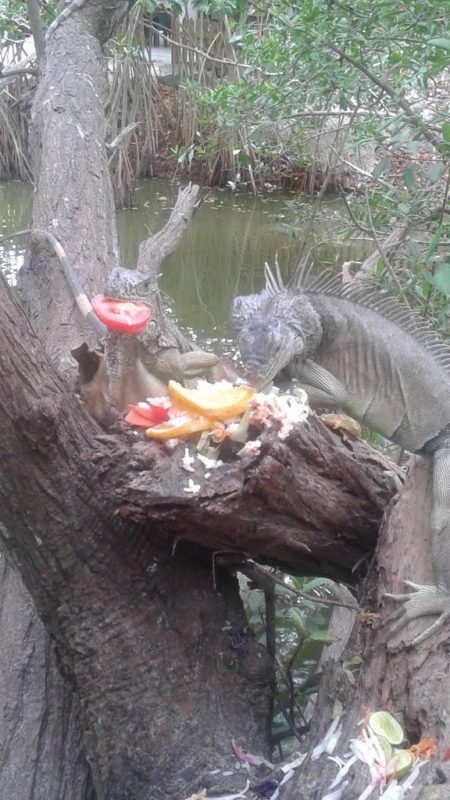 The Iguanas Were Not Going to Miss the Party!

A tropical vacation would not be complete without a daily dose of fresh coconut.  The young fruits are full of water.  It’s this water that will eventually turn into the meat rich in fat, which yields coconut milk and eventually coconut oil.  Anyway, it seems like everyone who lives here has a machete and isn’t afraid to use it.  Furthermore, being in a region where drinking the tap water is questionable, the coconut tree’s ability to filter water from the earth and deliver it free of contamination, full of electrolytes and in its own container (drink it right out of the coconut shell itself and then toss the shell under a nearby tree to compost it) is a real boon.  Young coconuts are on every restaurant menu, otherwise known as coco.  They throw a shot of tequila in it and it is called coco loco.  My favorite place to buy fresh coconut is from the people who just set up shop any old place – just them, a large onion sack of coconuts, a box of straws, and their machete.  In most places in the world, a fresh coconut is relatively inexpensive, which makes it a great option.  It’s cheaper than than bottled water, more nutritious, and totally ecological.  The water is just one of a gazillion products that local people derive from the coconut palm.  It’s a truly incredible plant that has found its way around the world, floating from one tropical location to another.  The seed (the coconut) lands in the sand and starts a whole new colony of trees. 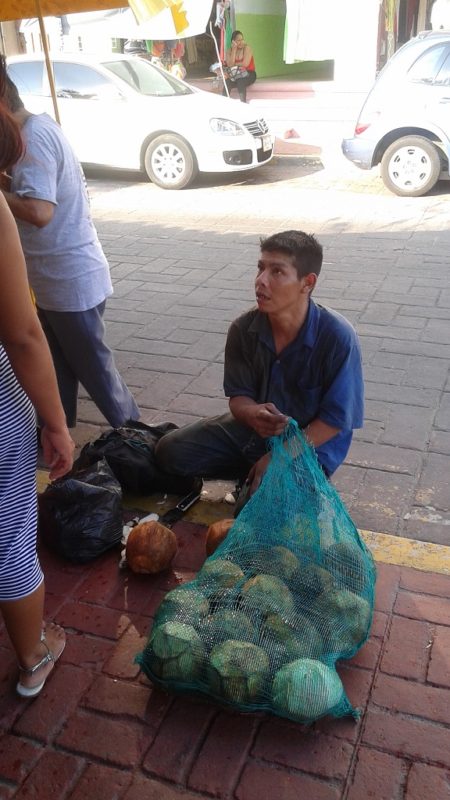 Fresh Coconut Replaces (Or Should) Bottled Water in the Tropics 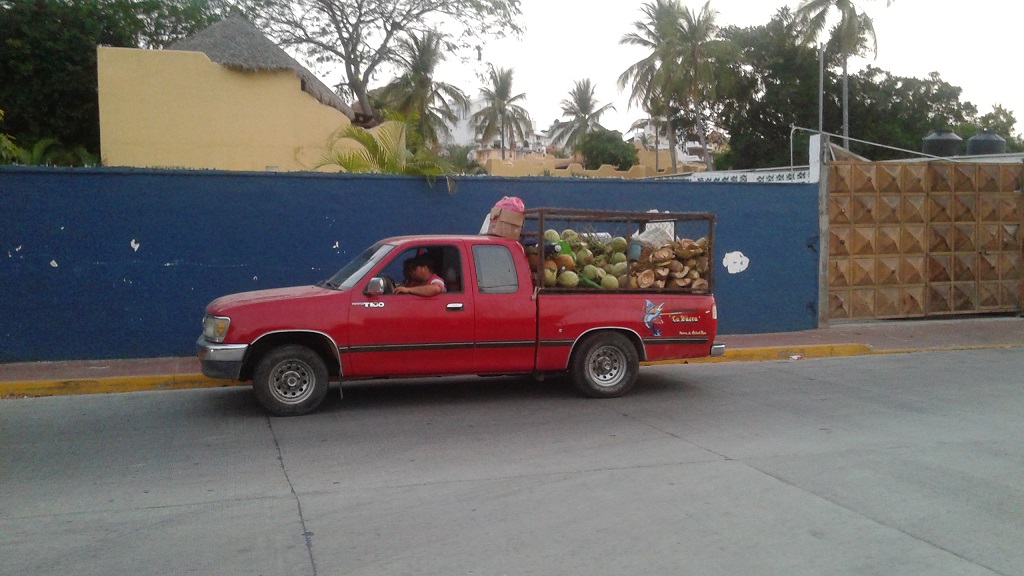 Amidst the abundance of fresh food, there was plenty of processed food available, if that is what you seek.  A lot of locals eat processed food, probably because it is accessible and affordable.  But do yourself a favor, and support the local farmers and vendors and fisherman.  Your taste buds will thank you, many, many times over.

Living Simply Selling Fruit Is a Way of Life