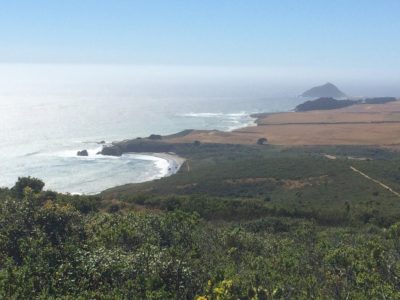 The Big Sur Coastline Draws You in

Our last night at Andrew Molera State Park is upon us.  From exploring Big Sur and seeing many of the campgrounds, we confirmed without a doubt that we are at the best one and we have enjoyed the relative solitude here, not to mention we feel we were lucky to have landed a spot, since it’s in high demand.

After breakfast we walked to the Molera horse stables where about half a dozen other people were also waiting to go on the 11am ride.  We were all paired up with a horse, based on our height and weight.  Brendan being tall was paired with Star, the tallest horse.  I was paired up with Cheyanne, a beautiful solid colored brown horse.  We were given some basic instruction and help to mount our horses and then we slowly walked out of the stable, down the road, across the river and through Creamery Meadow.  Although I was told Cheyanne often wants to get out of line, she was actually very well behaved and played the caboose role quite well.  Star had just had her hooves clipped and her feet were a bit tender, so she kept looking for softer ground to walk on.  This was good, except that the softer ground on the edge of the road was thick with poison oak.  We both had pants on, but as you could imagine, we were a bit concerned about the situation. 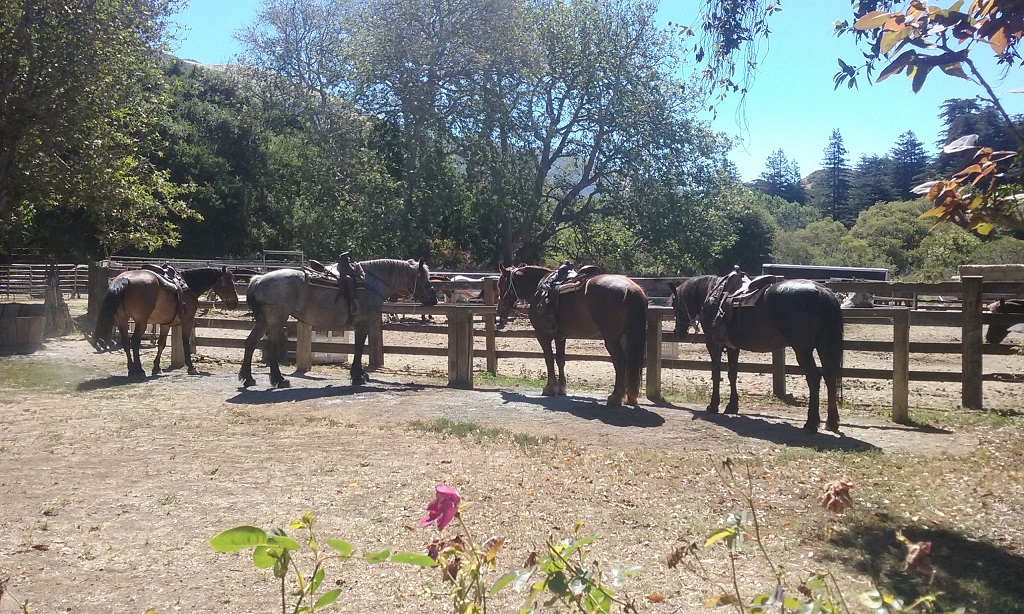 Horses Are Such Striking Creatures

Forty minutes or so later we emerged on the beach, but from the opposite end from where I emerge when I walk from our tent.  It was cold and windy, but totally worth it.  The wind blew our hair and the horses’ hair.  They looked so free and all of our spirits were soaring.  The guide took some pictures of us and then we headed back the same way we came.  The shrubby meadow was expansive and gave way to the mountains in the backdrop.  The guide pointed out Piedres Blanca- the limestone peak in the distance. 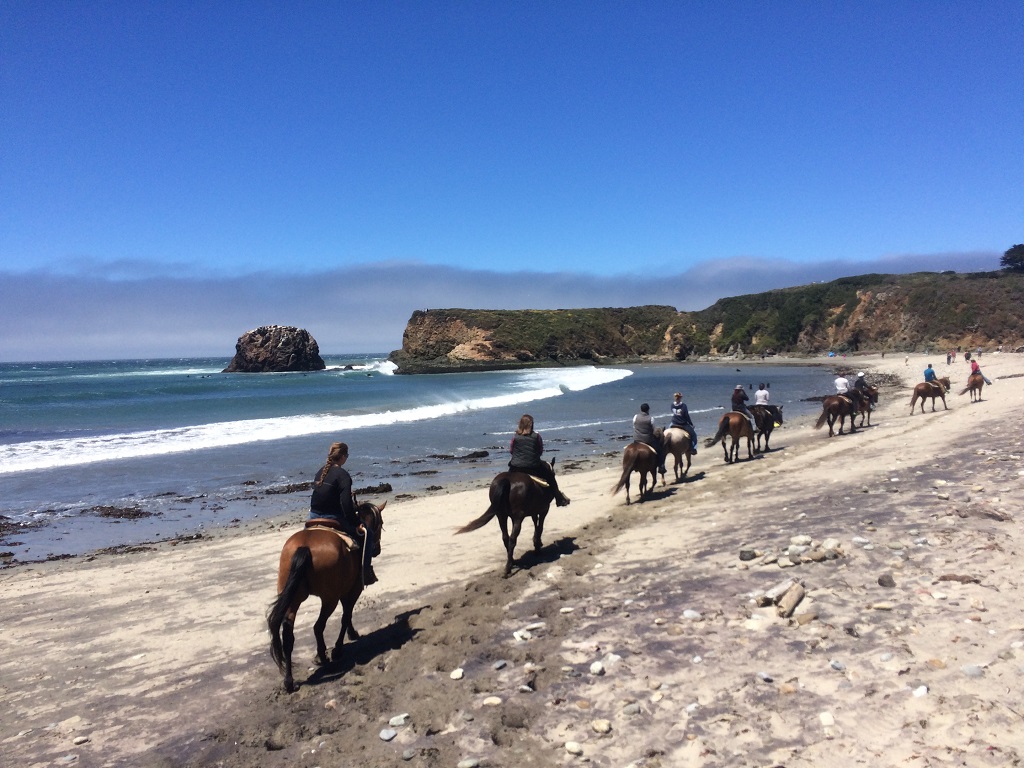 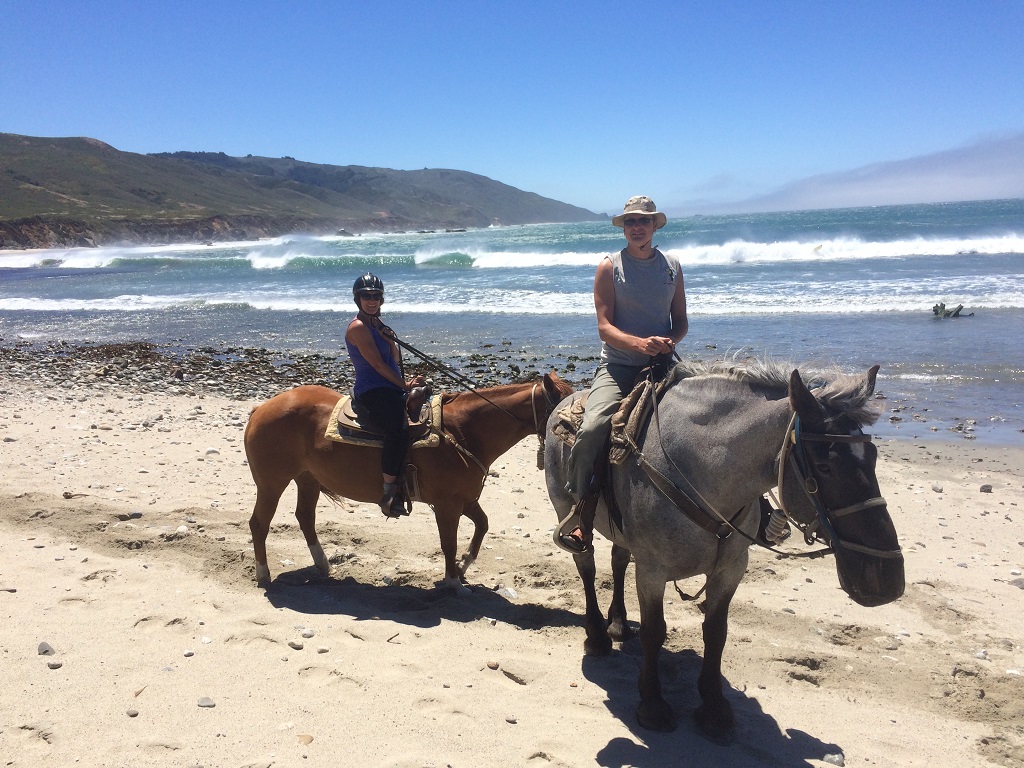 While the Whole Ride Was Fun, Getting to the Beach Was the Highlight

Back at camp, we washed our bodies off where we had touched poison oak and Brendan washed his clothes.  Ruining our vacation with an itchy rash was not on our itinerary!

Then we cooked up some chili (glamping was in full effect – chipolte cheddar cheese and grass fed beef to complete the experience) and during that, a couple approached us, asking us when we might be checking out.  Alvaro and Jane lived in San Francisco and were making a quick getaway for the weekend to catch some surf.  Brendan offered that they could set up their tent near ours and have first dibs on our spot once we checked out tomorrow.  They were extremely grateful!

Sticking close to home today, we explored Andrew Molera State Park a bit.  We chose a trail that started out on the river, then turned and climbed steeply for about 600 feet of elevation and met up with the ridge trail overlooking the ocean.  We both prefer hikes that take us through different ecosystems and this one exemplified several transitions.  Descending the ridge trail, we took turned off on the bluff and walked in the wind on what felt like the edge of paradise.  Eventually we made our way down to the beach and although it was incredibly windy, we couldn’t help but hang out for a while. 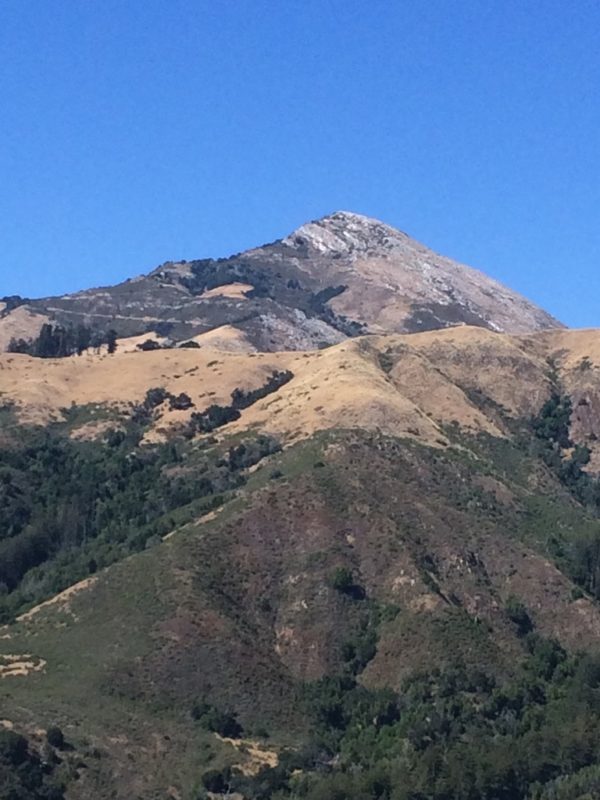 We Could Have Climbed the Peak. . . 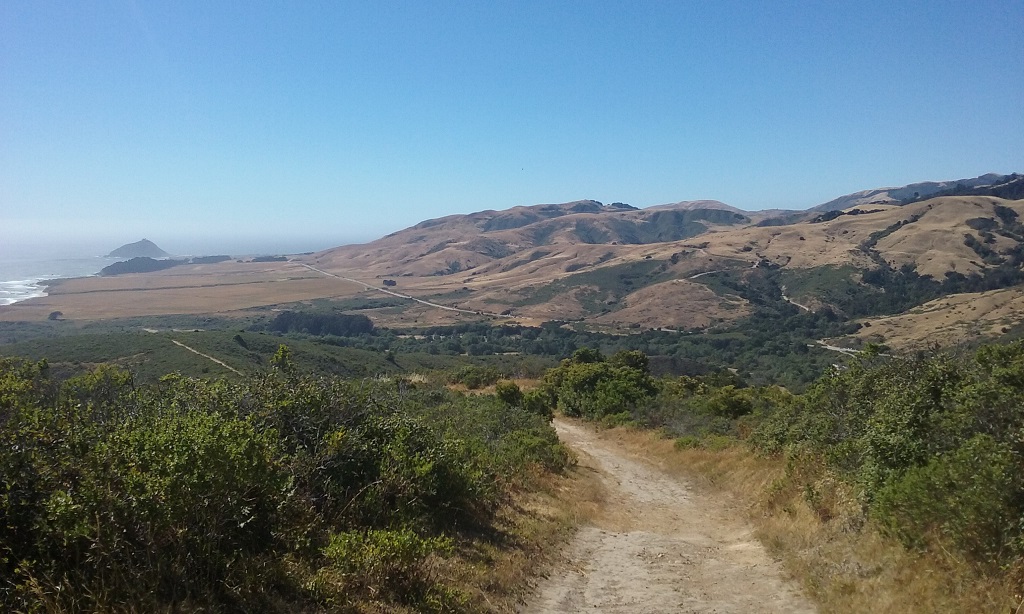 But We Descended Instead

Now, we hadn’t read this in any of the books, but we found that some portions of the beach had a thin coat of purple sand over the rest of the sand, just like at Pfeiffer Beach.  And also woven into the scenery was black sand.  The mélange of color was intricate and impressive.  And feeling the sand against my legs as it blew with the wind, tickled me in a certain way.  We inspected the rock structures behind us to see what was creating the black sand and there were veins of a softer black rock, embedded in the harder stone that created the structure.  Picturesque as picturesque gets. 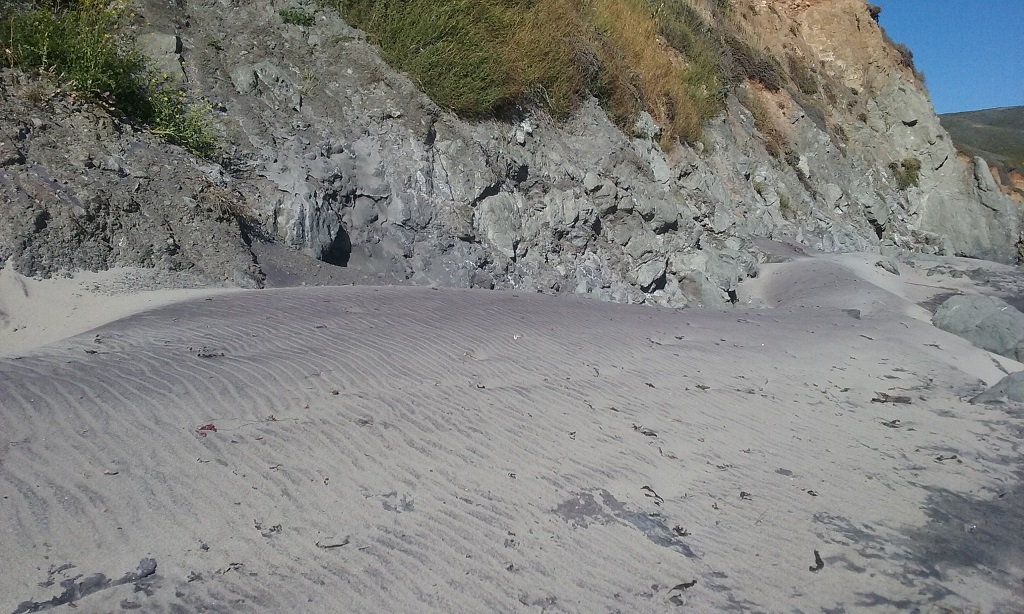 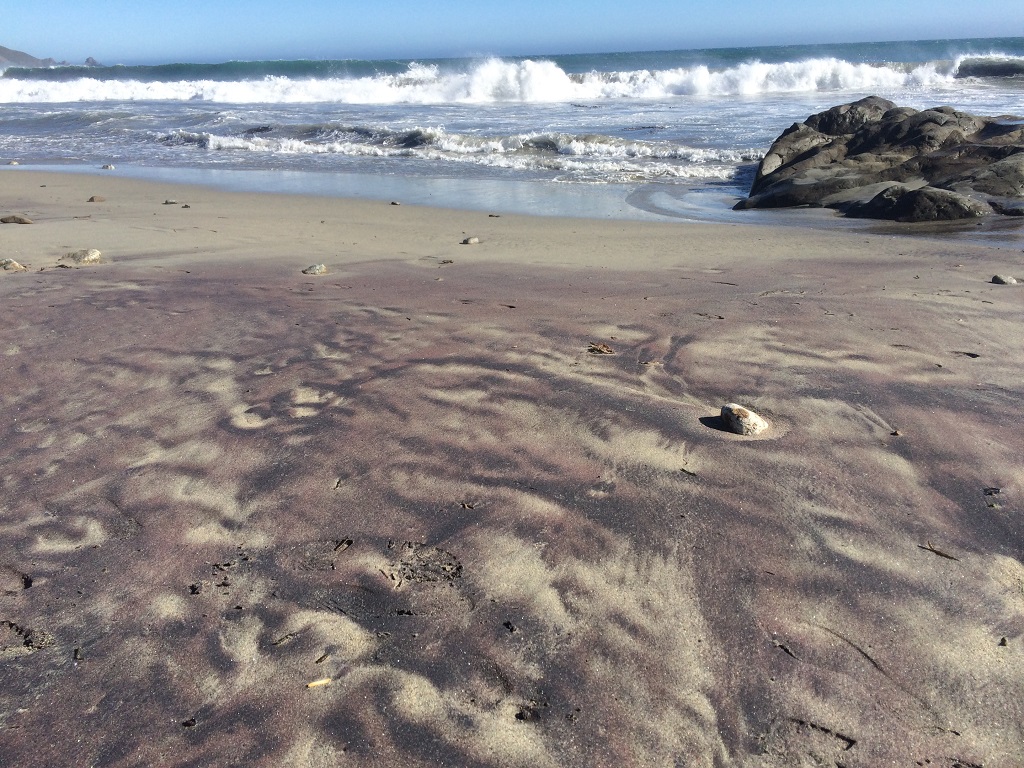 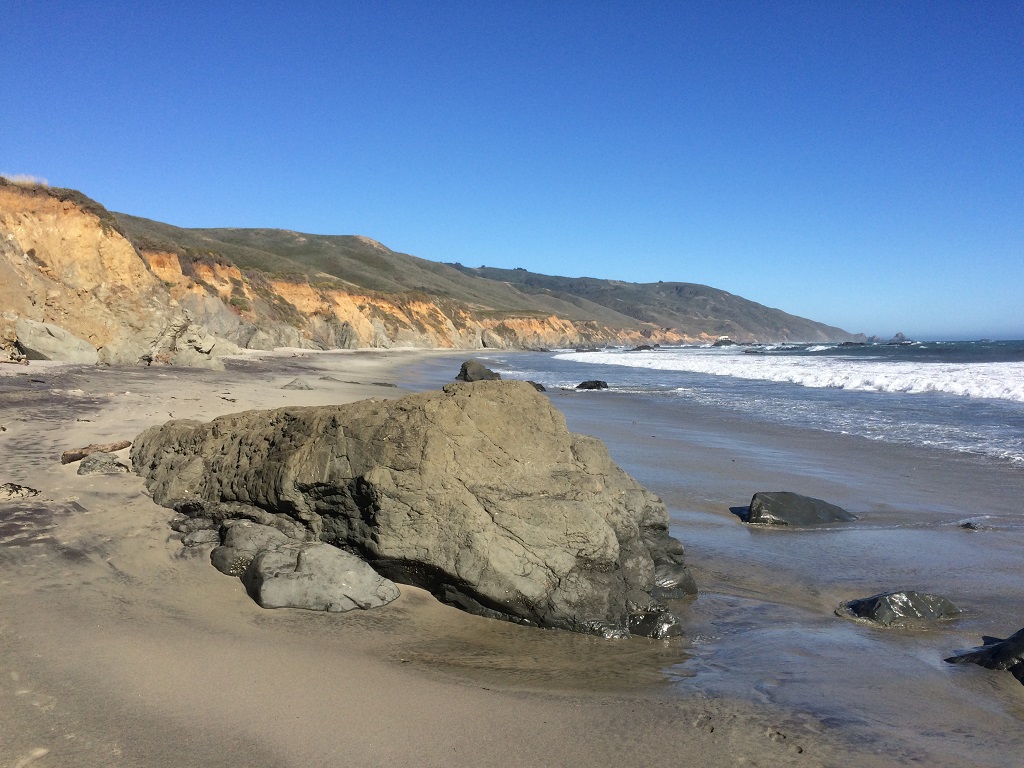 Andrew Molera’s Beaches Are Scenic and Have Relatively Few Visitors

We weren’t the only ones engaging in the moment.  There were approximately eight surfers out in the water.  They all had wetsuits on (the water is probably about 55 degrees), but we noticed some of them had bare hands and feet – brave men that they were!  Watching them catch and ride the waves was as mesmerizing to us, as it was exhilarating to them.  Well, maybe I am embellishing here, but you get the point. 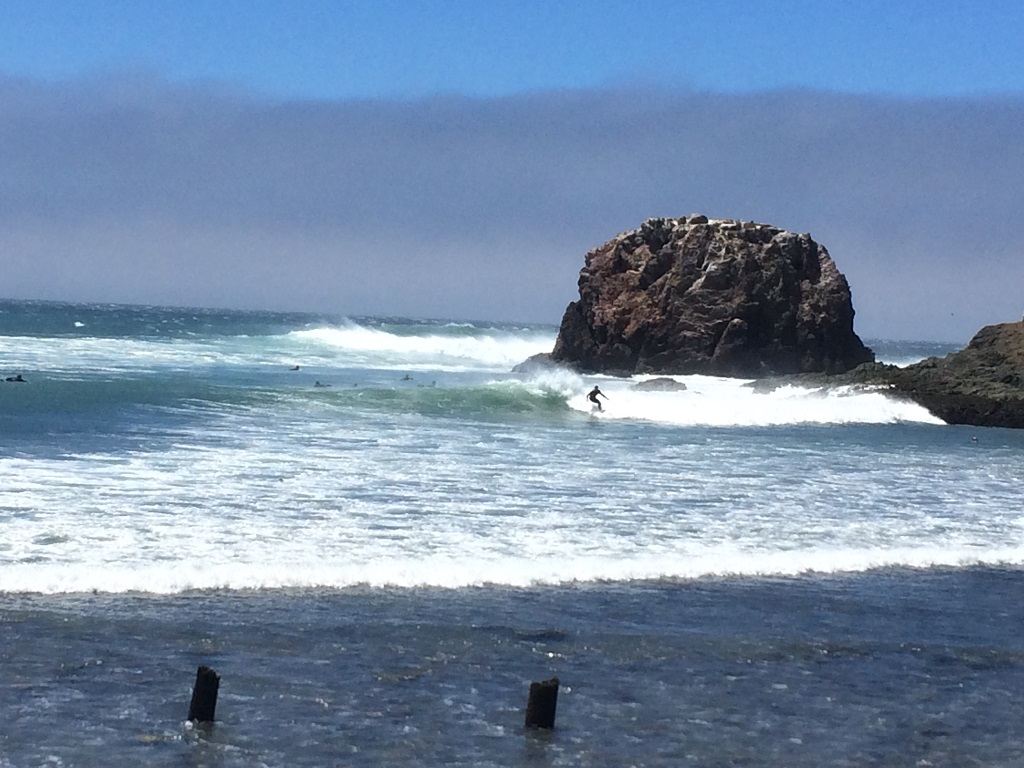 Surfing Is Not in My Blood, But Surely It’s in Other Peoples’

We left for the Henry Miller Library, excited to soak up a bit of the local culture on a Friday night in Big Sur.  The cabaret troupe called themselves Big Surcus.  We arrived early and spent a little time perusing the library, which is actually a bookstore.  They curated a modest number of titles, focusing on independent thinkers.  Jack Kerouac and JD Salinger are but two examples.  Henry Miller’s books were totally risqué for their time and, after I read the first few chapters of Under the Roofs of Paris, I can state with assurance that it’s risqué by today’s standards as well! 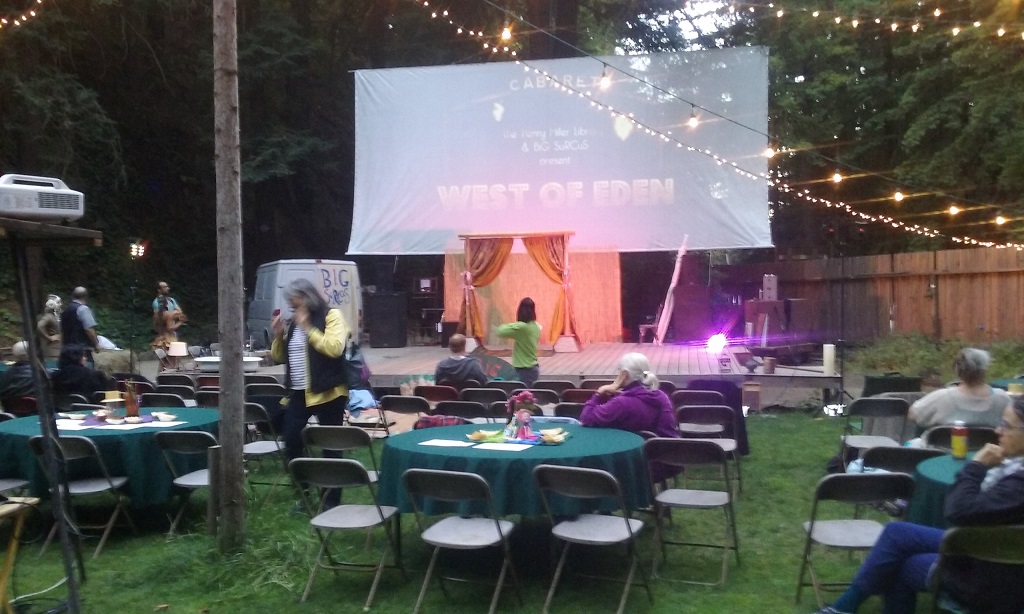 The show began and it was enjoyable through and through.  The troupe consisted of four women and two men.  They read poetry, did acrobatics, danced, shadow danced, and fire danced.  They were all talented, but the level of skill and agility and strength and flexibility that the men displayed was completely impressive and awesome.  The master of ceremonies, born and raised in Big Sur, was engaging and knew how to relate to the audience and draw them in. They very easily could have been the type of act that you would see at the Oregon Country Fair. 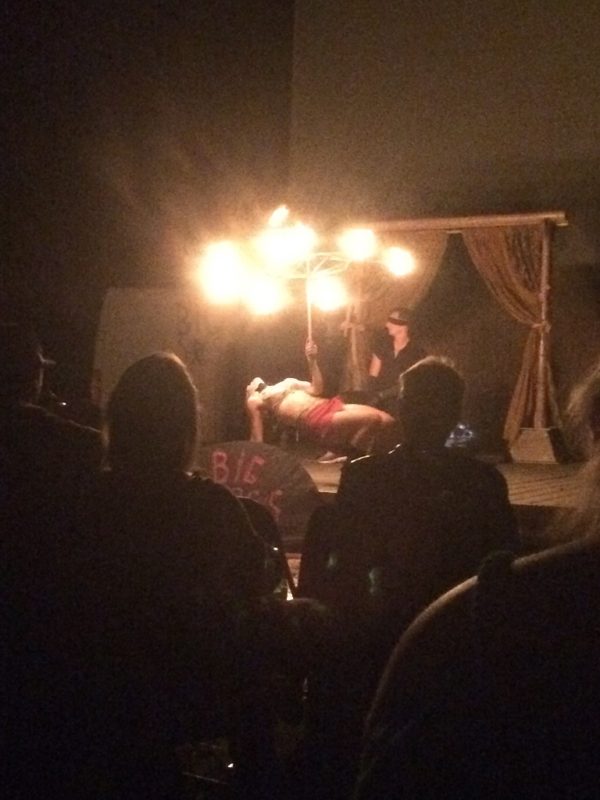 After the last act, Brendan went to talk to the MC about the music and I overheard the woman at the neighboring table stating she had lost a crown from one of her teeth and needed help finding it.  There were a few of us and I suggested moving the table so we were unobstructed while crawling on the ground searching.  The group of three grew into about eight.  Luckily, a lot of us were carrying headlamps and flashlights, as the sky was way dark by now.  The woman who lost the crown was clearly upset and I can see why.  She said the tooth cost a couple thousand dollars and also, it was her front tooth, so it was totally noticeable.  Now one of the guys in the search team had a sense of humor and with the sight of a group of people crawling around on their hands and knees, faces inches from the ground, patting and combing the earth – he suggested that when people came by and inquired as to what we’re doing, we should tell them in a hippie voice “We’re on shrooms man.”  I actually saw him do this to a few people and I lie to you not, we got some pretty odd glances!

The search team was dwindling and eventually Brendan and I headed back to camp at close to midnight.  Most nights camp was super quiet with very little light.  However, tonight most tents had some light emanating from them and there were a lot of people walking around with lights and camping gear.  I think since all the official spots were full, hordes of people just waited to sneak in after dark.  With so much nighttime action going on in the meadow with the lights and all, we almost thought we were at the Oregon Country Fair! 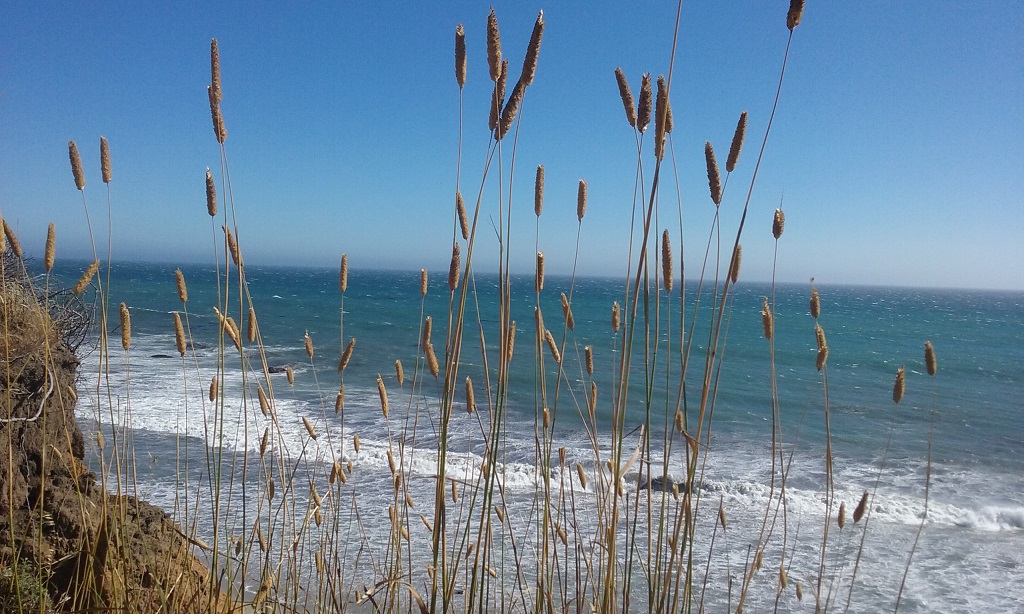