A Day in Lower Manhattan – Nix and the Highline 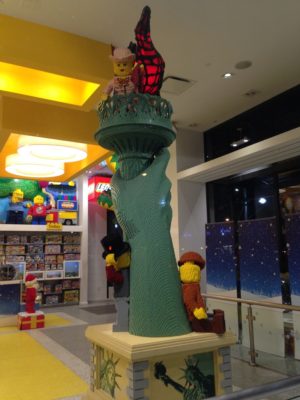 You Are Looking at Ms Liberty Made of Legos

Jan. 1:  If the first day of the year is any indication, the rest of 2017 will be busy, entertaining, and open up a lot of new experiences.  I figured it would be best to hold off on tackling any New Year’s resolutions until I got back home and in the groove.

Regardless of what time I go to bed, I tend to wake up on the early side.  Woody was still sleeping and I took it upon myself to research Michelin restaurants that are open for lunch and in lower Manhattan.  I did this based on Woody expressing interest in a Michelin lunch yesterday and figured, why not?  I got his half-awake permission and booked online and I was off to hot yoga.

Stepping out onto the streets of Manhattan is always an exhilarating experience for me.  I am sure others have the same experience.  The city pulses to the rhythm of its own heart and anyone who has been here will attest to.  I headed toward midtown and spiraled up a few flights of steps to the yoga studio.  Doing anything in NY is a culturally refreshing experience, compared with the West Coast.  That is because people of all races and ages and body types partake.  The crowd at Yoga to the People was a good example of this. 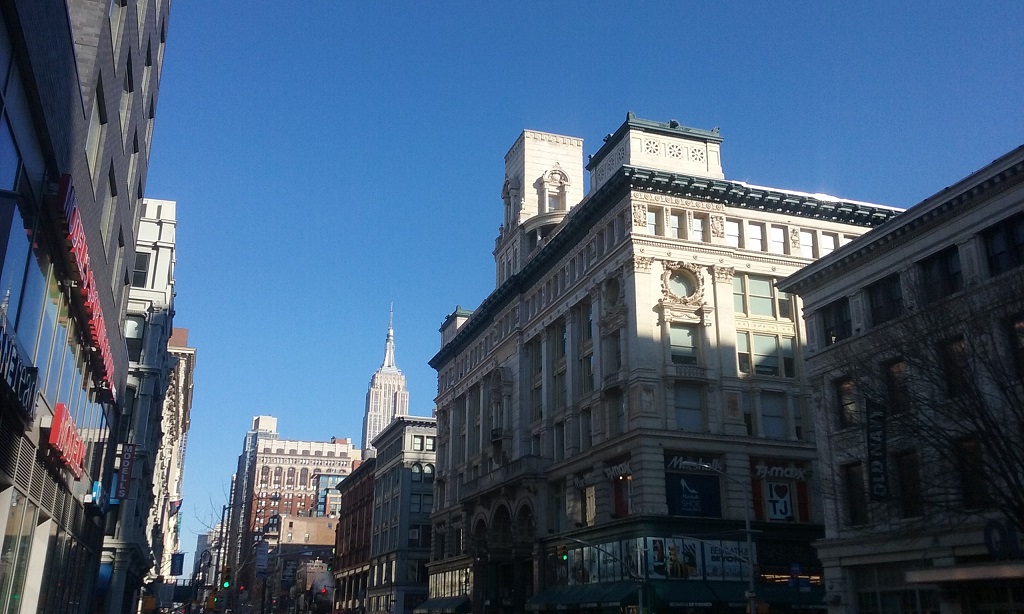 Can You See the Empire State Building?

After an invigorating session, I hustled back to the loft, retrieved Woody and we swung from the hips through Union Square and south into the Village to Nix.  What was funny was that Woody had already researched Nix himself.  A few days earlier he had read an article about newly awarded Michelin restaurants.  What a flavorful and creative meal we found! 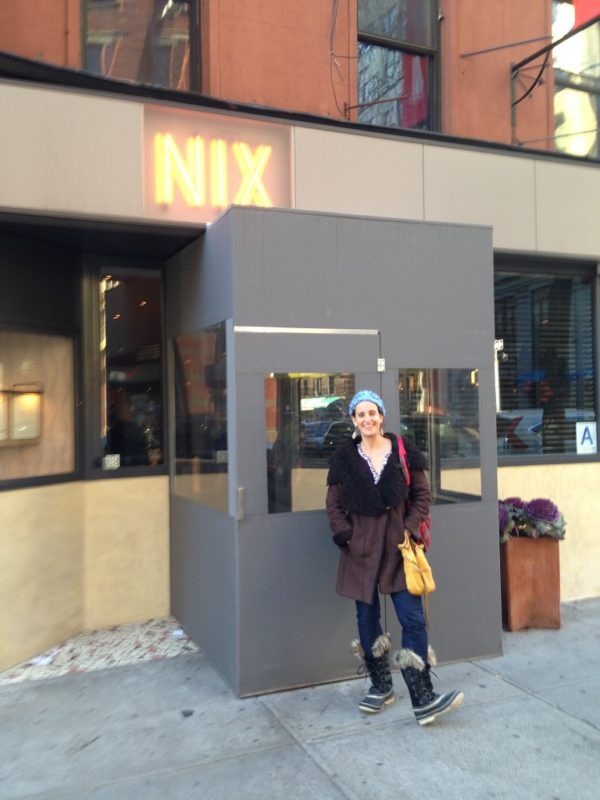 Nix Was a Very Worthy Find

We had a Middle Eastern dish composed of dips – hummus, eggplant, and roasted red pepper.  All to be eaten with tandoori bread fresh out of the oven, with that fresh bread smell that will knock your socks off.  The eggplant was not only charred, but it tasted smoky.  The waitress explained to us that the eggplant was cooked in the tandoori oven with the bread and, depending on what shelf it’s placed on, the flavor will develop accordingly.  This was surely the best eggplant dip I have ever had (and I have had some incredible eggplant dips). 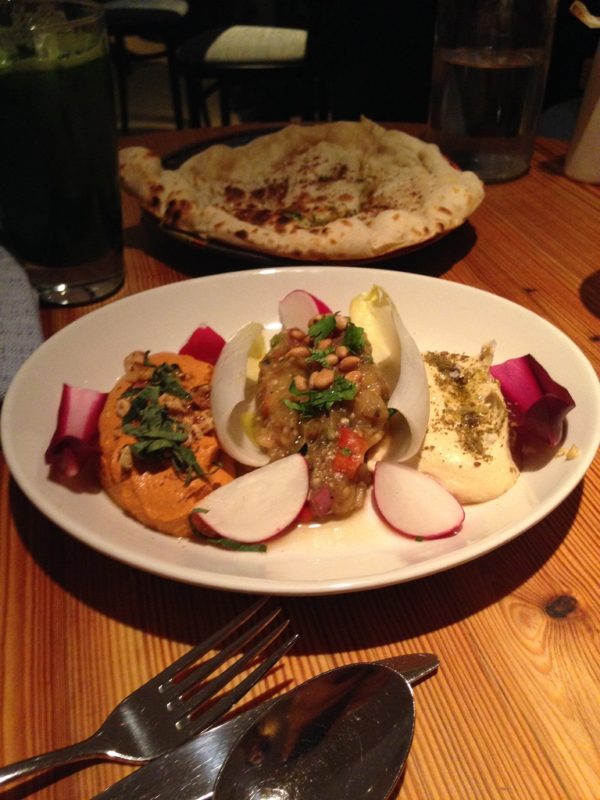 Smoking Veggies in a Tandoori Oven Is the Secret

We also had a tempura cauliflower dish.  The tempura had a unique twist on it, as it was well coated in a sweet and spicy sauce with Indian spices.  It was served with bao, a Chinese type of dumpling, which was both sticky and light and to be opened up and stuffed with the veggie components. 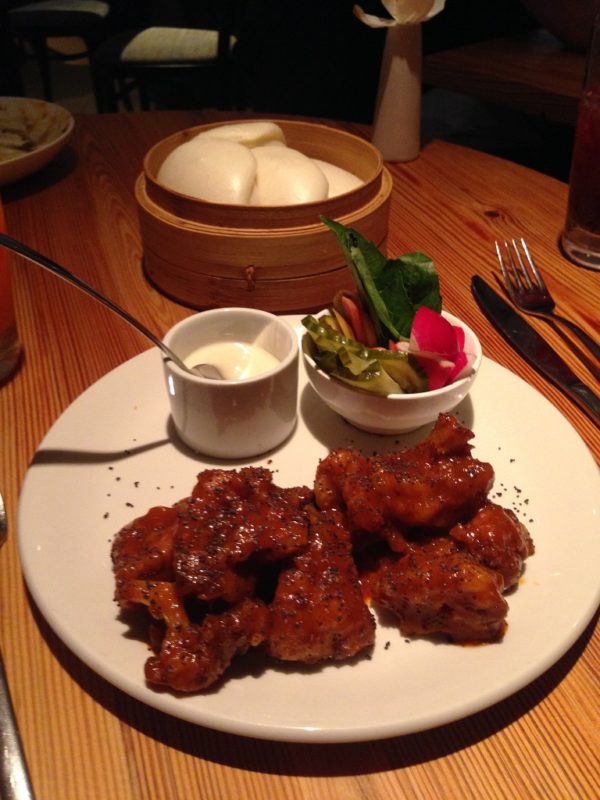 Part of what made Nix unique is the fact that is was vegetarian.  Also, there were so many different influences – Indian and Middle Eastern and even Chinese cuisine found its way into the menu.  Naturally, we both assumed the chef was Asian.  Although when we inquired, we were told he is just a white guy from Oakland.  That matters not, the food kept our taste buds in a constant state of entertainment.

I had later emailed my good friend Dan, and he got back to me with a link from New York Times’ Pete Well’s, stating something to the effect of “I am sure you already found this article on your own, but here goes.”   Well, no, actually, I had not found this article on my own and now I was really smiling that the three of us found our way to Nix, on three totally independent paths.

Woody was interested in playing chess again at Union Square.  This time, just by happenstance, we sat down with TC, which is an acronym for Teaching Chess.  I believe this turned out to be our most poignant and special experience out of our whole trip.  Surely it was for me.

He had a similar set up as last night with the play clocks.  Although as I watched the two of them, I saw that TC would pay little attention to whether the clock was running out.  He even took time to correct moves that Woody made, asking him “are you sure you want to do that?” and letting him take a move back.  When Woody pointed out that the clock had run out, I commented “TC is not about hustling tourists to beat them at chess.  TC loves what he is doing and wants to keep doing it, and he understands that the money will follow.”  TC glanced at me with a twinkle in his eye and nodded.

We Felt an Immediate Bond with TC (Teaching Chess)

He gave us the backstory on how he came to love chess and I was mesmerized.  His family moved from Ghana when he was very young.  He had a dozen siblings and they all lived in Harlem.  When he was ten, his parents gave him a chess board for Christmas, but they didn’t know how to play themselves and told him to take it to his teacher at school.

So he took the board to his teacher and she didn’t know either.  She told him to take it to the librarian.  So he did, and she didn’t know either, but she suggested they take out a book and learn together.  So they did.  And he studied intently.  The librarian actually spoke with him mom about his progress.  Mom offered TC money, if he got to the point of learning ten new games.  To everyone’s surprise, he did that in a week!  And he just kept on keeping on in the chess world and had never stopped.

Besides his fascinating story, he also shared Union Square stories.  The man Woody played last night was there, and TC told us that his name was Jimmy and he has an ELO  of 2000 (not 1600, as Jimmy had stated).  And next to us was Paul, a Russian who has an ELO score of 2700, making him one of the best in the world (highest being 2800).  So there is a whole lot of backstory to a scene that thousands of people walk past every day and pay little, if any, attention to.  TC was awesome and I want to share his YouTube video with you, where he struts his stuff as King of the Square.

On our way back home, we stopped to talk to the man outside the Rudolph Steiner Bookstore.  It’s on our block and we had noticed it yesterday, but it was closed.  Woody went to a Waldorf School.  Waldorf Schools are the schools created by Steiner.  So this was an opportune moment to weave together some of the threads in the tapestry of our world.  The man told us that this street in Manhattan was a bit of a spiritual mecca and he also shared some Steiner philosophy that was special to him. 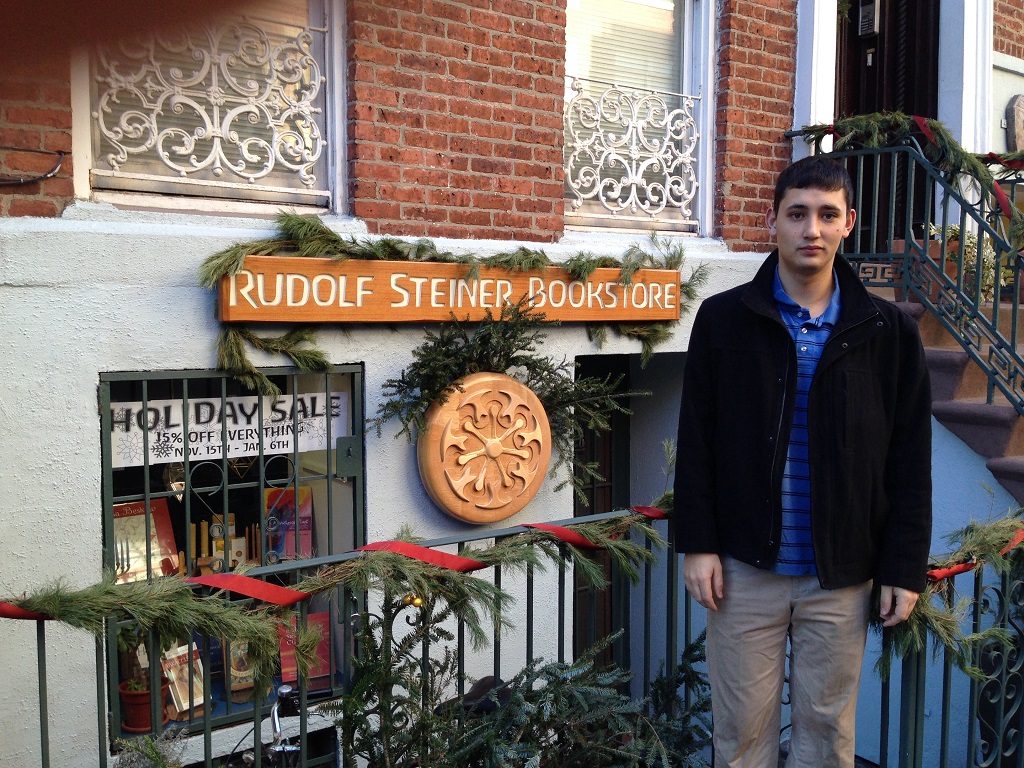 The days were short, so I was eager to get a move on to explore whatever we could in our hood.  There are some great museums, but they are all closed on New Year’s Day.  Instead we went to Chelsea Market and maybe that is where everyone else who was considering a closed museum went as well, because it was packed!  We made our way through like cattle, stopping to check out the variety of restaurants and some of the unique shops.

Here Are a Few Things That Really Caught My Eye 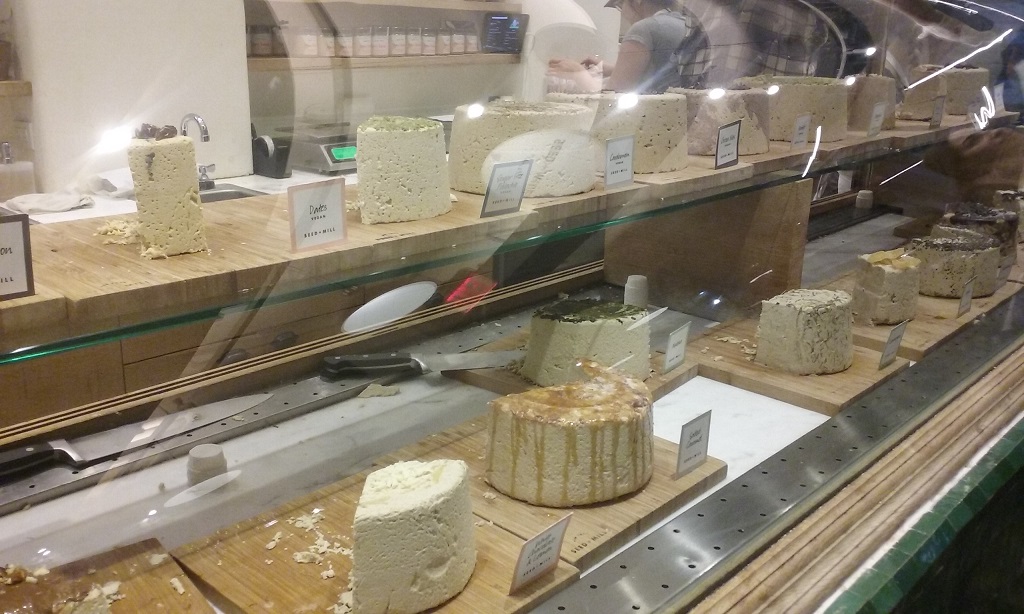 We exited Chelsea Market and ended up just a block from a staircase to ascend the Highline.  We arrived just in time to watch the sky display a palette of color behind the Hoboken skyline.  There was a very funny statue of a man wearing nothing but his underwear, holding his arms out.  I am sure he’d gather some glances at any point in time, but definitely on a winter night.  People were taking turns snapping pictures, and I really giggled when I saw people putting their jackets on him. 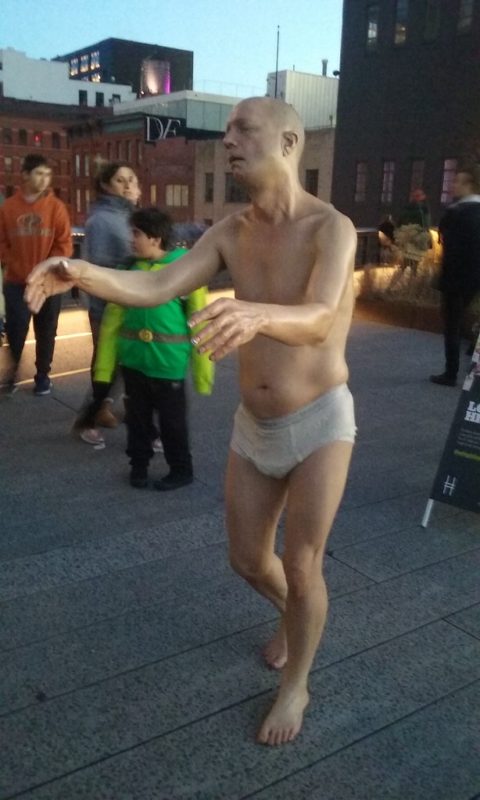 We Couldn’t Help But Do a Doubletake

We have walked the Highline before and like Central Park, it changes with the seasons.  In the warmer months, the old train depots turn into outdoor cafes and herb walks are given.  For now, the trees were bare and the herbs died back.  It was still very enticing in its own way and provided a wonderful spot to walk free of cars while Woody and I bonded a bit, as he shared his ideas about the world, his friends, his aspirations, and his maturation process. 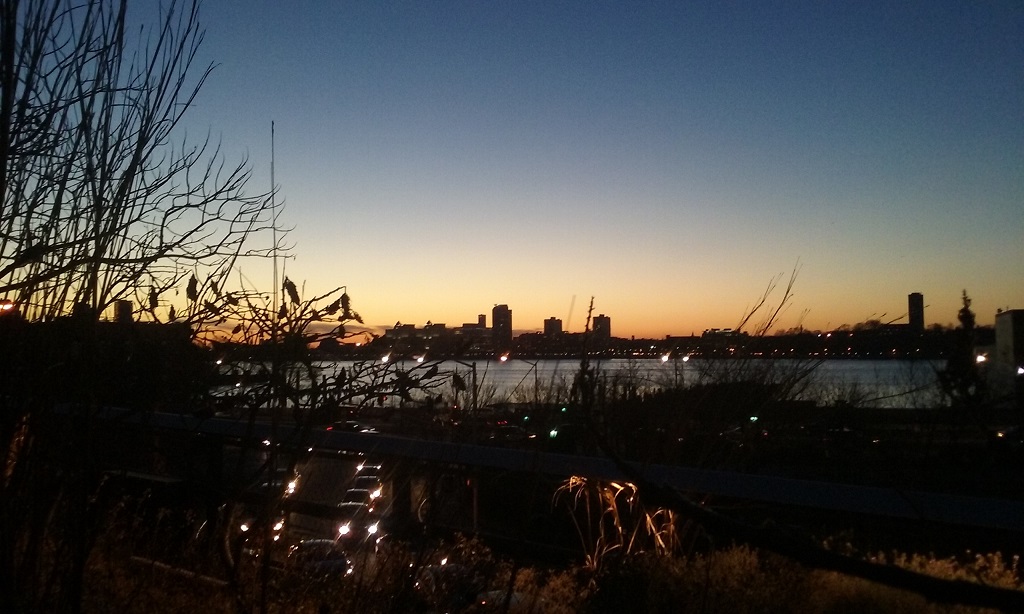 Sunset as Seen From the Highline

Backtracking to Long Island a few days ago, we had watched the Cooking Channel and a show called Beat Bobby Flay.  I hadn’t heard of him, but that night provoked some research and I saw he had a restaurant in NYC.  I thought it would be fun to tie that theme together, so we agreed to make that our second dinner.

Getting through Times Square was nuts!  There was literally a river of people in every direction.  It was extremely chaotic, but since I have New York blood.  I carried on and we emerged in a few blocks to Bar Americain.  The meal was pretty good, nothing remarkable on its own, but some nice fish dishes and good sauces.  It actually tasted very much like food I would make at home. 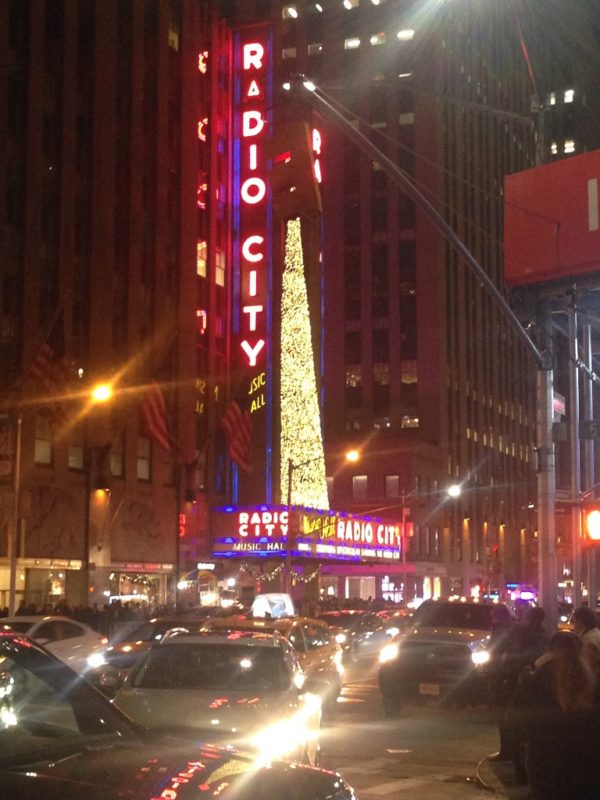 During the course of the day, Woody had reached out to our former roommate from years ago who had since had a brief stint of living in NYC.  Woody was looking for a suggestion of a good sports bar.  This is because it was week 17 in the NFL.  It was the final game of the season.  The Packers versus the Lions and it had playoff implications.  Foley’s had an emphasis on being baseball themed, yet it was a fun atmosphere nonetheless.  We nursed our drinks (still full from dinner) and stayed almost to the end of the game – Packer’s won!

So I sit here in our cozy Chelsea loft, thinking that we packed quite a bit of life into the past two days.  Our flight does not leave until 11am tomorrow, but since we need to walk to the subway, take a 45 minute ride to the AirTran, ride to JFK, and deal with checking in during the holiday season, we need to allot four hours.  And so for us, we will be retiring shortly, in the city that never sleeps. 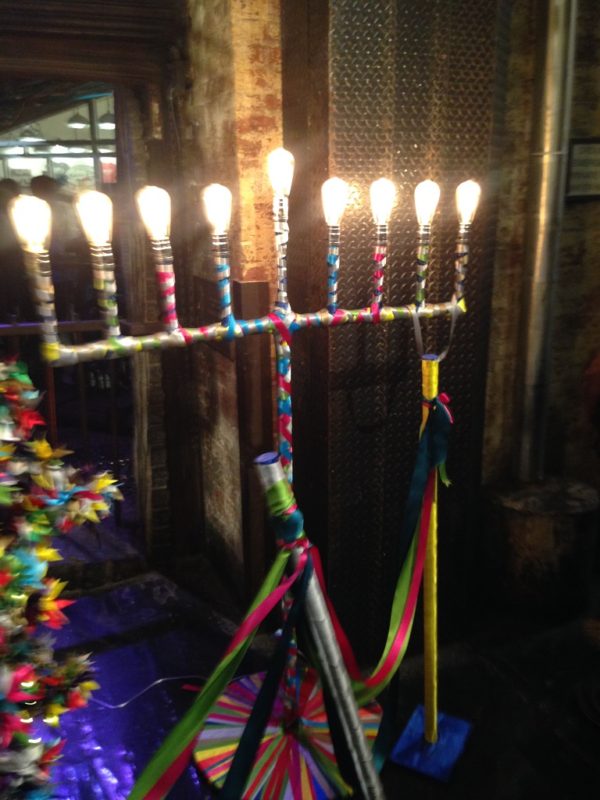